Well this isn't quite our shortest ever blog (we'll do well to beat this), but last night's Storm Petrel ringing only resulted in two birds caught, which wasn't really enough to round the seven ringers present! Next time...
Posted by Mark Grantham at 10:26 No comments:

This week a small contingent for WCRG have been over in Guernsey helping out Guernsey Gulls and North Thames Gull Group cannon-netting on the island's one and only landfill site. 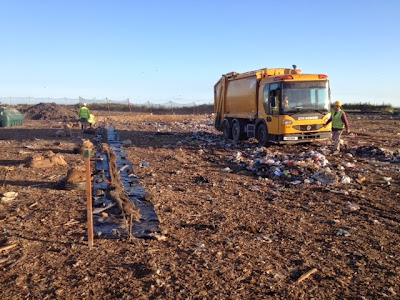 Over the week we squeezed in 12 fires, catching just over 1,200 big gulls, colour-ringing 316 Lesser Black-backed and 730 Herring Gulls. Add to that a fair few Great Black-backs and a very smart Yellow-legged Gull and it's been a good week. 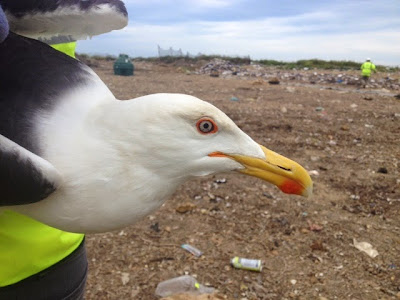 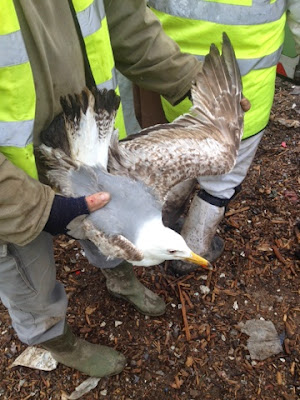 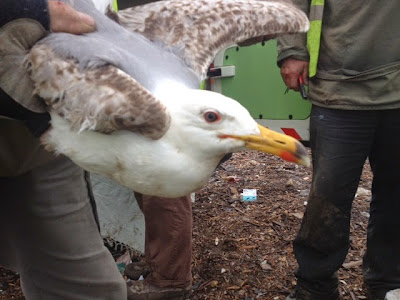 After catching, gulls are kept in a large keeping cage (a modified cage trap really), which ensures they stay cool and relaxed, using a small catching box to deal with a few birds at a time. 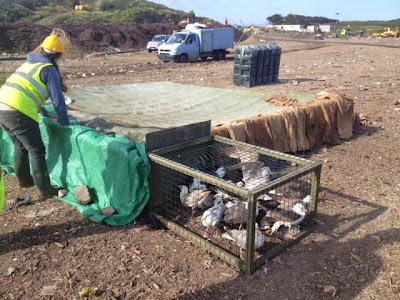 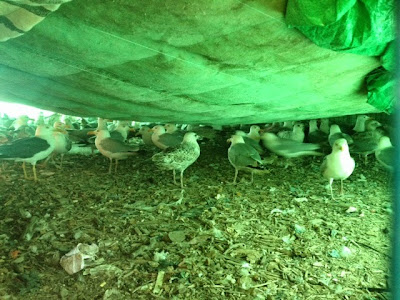 All birds ringed during the week were also colour-ringed as part of a long-term project monitoring productivity at breeding colonies on the island. Several birds were also caught which needed a colour ring replacing, having effectively worn out their original ring. 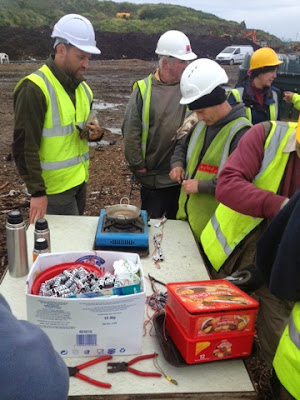 The tip is also often a rather interesting place to work, sharing it with some unexpected characters. 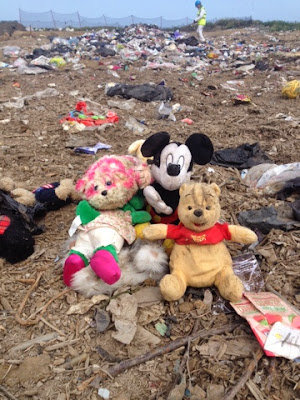 The continued high pressure gave us a great chance to do some catching up before a few of us are off cannon-netting gulls on Guernsey next week. First on the agenda was CES yesterday, with ours at Gunwalloe catching 16 birds, mostly Reed and Sedge Warbler. This compares to 19 birds last year (15 Reed Warblers), 29 in 2011 (19 Reed Warblers) and 33 in 2011 (15 Reed Warblers).

We were, however, beaten by the Nanjizal CES near Land's End, which netted 87 birds including a couple of Grasshopper Warblers, a Spotted Flycatcher and this surprisingly rather smart young male Common Rosefinch! 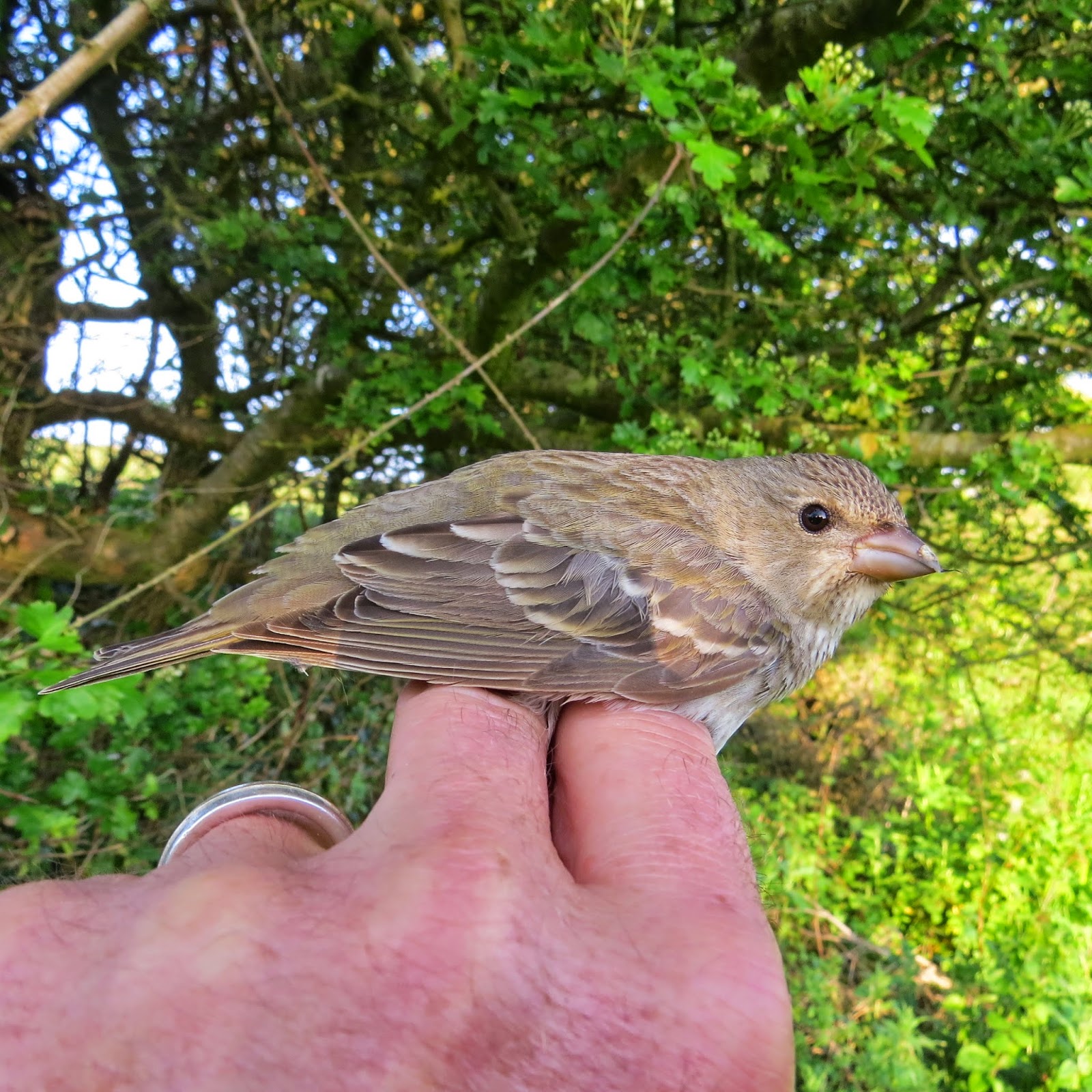 Today we were then able to get over to Mullion Island to ring a few Cormorants from the 51 nests we counted earlier in the season. There were a surprisingly large number of young birds (perhaps as many as 70), many quite well-grown, but we were able to corall a good number and colour-ringed 18 birds as part of our monitoring on the island.

Once we'd got the Cormorant ringing out of the way, we were able to have a quick look round the island to count the number of occupied Great Black-backed Gull nests. We are bound to have missed some, but the total of 62 nests (with 174 eggs) was still pretty impressive. This is almost as many as on Looe Island, which vies with Mullion Island to hold the title of the county's largest colony!

Thanks to Emma for the Mullion photos from the mainland and Kester for the gripping rosefinch pic.
Posted by Mark Grantham at 22:31 1 comment:

Myself and Simon Taylor (the enthusiastic nest recorder) spent yesterday morning mopping up a few nests at Stithians Reservoir, including three Carrion Crow nests (all with ringable chicks) and a Magpie (empty and possibly predated). 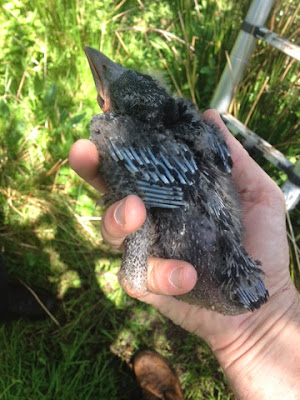 In the end we ringed nine chicks, which is probably more than done in the county in the last couple of decades! A quick check of the nestboxes confirmed the very low occupancy this year (as last), with birds variously laying, incubating or with small chicks. One Blue Tit (a retrap of a bird ringed at the feeders here in December 2013) was even incubating 11 eggs, which is pretty impressive!

Posted by Mark Grantham at 12:45 No comments:

We've had a pretty busy week, so are a bit behind on the blog, so only a quick update here...

At the end of last week we were out filming with Finestripe productions, who are working on a BBC1 programme (Britain's Boldest, out in the autumn) looking at our interactions with wildlife, including pasty-snatching urban gulls. So we were out for the day in St Ives fitting four breeding Herring Gulls with GPS loggers, which then transmit via relay stations to a base station positioned for the summer in a local B&B. At the moment the loggers are just recording a position every 10 minutes, but at the height of pasty-snatching behaviour they'll record a position several times a minute, allowing us to follow these birds around the town.

The loggers also have an inbuilt accelerometer, so we'll hopefully be able to see the exact behaviours of these birds as well. Exciting times!

We then changed location at the weekend, setting up at Trebah Gardens for a weekend Wildlife Celebration with Cornwall Wildlife Trust. We've run a ringing demo at this annual event for a few years now, but this is the first time at this new location (it used to be at the Lost Gardens of Heligan). Things didn't look good, as all of our nestboxes (admittedly only put up in February) were empty and the peanut feeders had been helpfully emptied by local squirrels, but we persisted anyway...

In the end, we caught just about enough birds to keep the crowds happy, including plenty of Robins (always a hit), Nuthatch, Great Spotted Woodpecker, Chiffchaff, Blackcap and a couple each of Blue, Great and Coal Tit.

These demos are a great way to get kids hands on and enthused about wildlife and we were pretty busy on both days. We also managed to recruit a couple more potential trainees, at least one new Barn Owl site and another good gull contact, so good for us too! 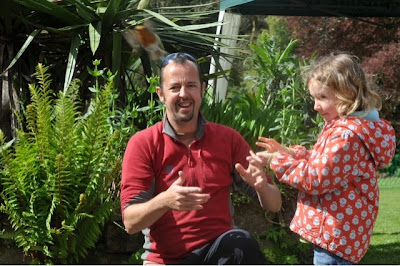 Big thanks to Emma for helping out over the weekend and also for taking some pics.
Posted by Mark Grantham at 09:26 1 comment:

The first week of May sees the start of CES (Consant Effort Site) season at Gunwalloe, using standardised mist-netting to monitor the abundance, productivity and survival of breeding birds. This is our fourth year of CES in the reedbed at Gunwalloe and in all that time we've never managed to fit in the first visit due to windy weather, so today was a bit of a novelty! But a good novelty though, as in amongst the 16 birds caught was this very fine male Whinchat; the first to be caught by the group. 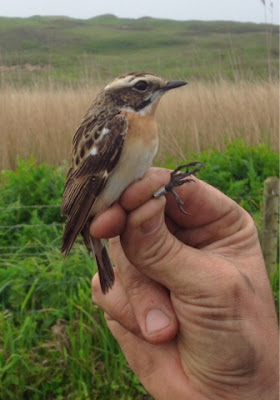 More usual fare were the returning warblers, with five Sedge and four Reed caught, including birds first ringed in 2011 and 2012. Interestingly, Y010039 was ringed as an adult on 25th May 2011, so is now at least five years old. Strangely, after ringing in May 2011, it was recaught 20 days later but not again until today... Not quite sure how it managed to evade nets for all that time!

Another bird with an interesting history is Reed Bunting L961915, ringed as a juvenile in August 2011 and then recaught just once each year since; in July 2012, July 2013 and then today.

The down side is that the reedbed site hasn't dried out much since last autumn and is, to say the least, a bit muddy now, requiring chest waders to stay vaguely clean. But even that doesn't help much and the only way to really clean up at the end of the session is the little-known 'grass angel' technique... 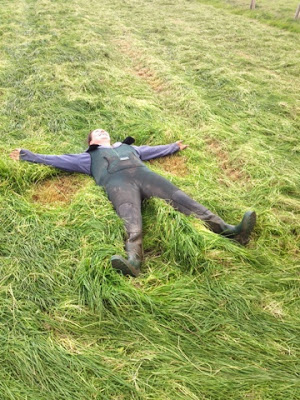 Posted by Mark Grantham at 13:10 No comments: