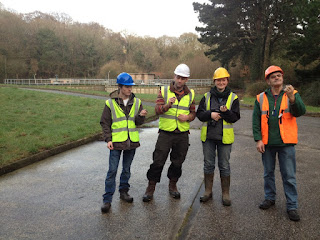 This week saw the first day out ringing for the newly-formed West Cornwall Ringing Group. Bringing together what few ringers there are down in the far southwest, the group will bring a new focus to ringing projects locally.

Our first day out ringing of 2013 saw a small group of us out at Ponsanooth Sewage Works, here proudly posing with the first birds ringed by the group - a small flock of Long-tailed Tits. The weather was a bit too clement for a big catch, but 49 birds including 13 Chiffchaffs and two Firecrest wasn't too bad! Such regular wintering fare is expected at these sites, so we now just need some colder weather to concentrate birds.

On the way back, we stopped off at a new site near The Lizard where a few Chiffs are feeding on old hay bales. A couple of single-shelf nets resulted in three more Chiffchaff ringed, including our first Siberian Chiffchaff (race tristis) of the winter - though sadly it wouldn't pose for a photo.
Posted by Mark Grantham at 20:51 No comments: