The group are currently running several long-term projects, including core monitoring projects supported by the BTO.

CES methodology involves making 12 visits to the site over the breeding season, rounghly once every 10 days. The commonest birds caught are Reed and Sedge Warbler, with good numbers of Reed Bunting and Blue Tit. 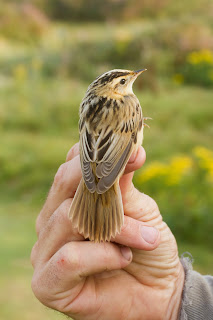 The group will continue to organise and maintain the standardised autumn ringing programme at Marazion Marsh RSPB reserve. The ringing effort here forms part of a network of sites along the south coast monitoring the passage of the globally endangered Aquatic Warbler. Marazion Marsh is historically one of the most important sites in the country for these birds on passage. The main species ringed at the site are Sedge and Reed Warbler, with annual totals shown below.

A second Retrapping Adults for Survival (RAS) project started in 2013, focussing on the thriving population of House Sparrows at The Lizard. Use of colour-rings here allows regular monitoring of birds at a garden feeder.

One of the most exciting aspects of winter ringing in Cornwall is the monitoring of the use of Sewage Treatment Works by wintering warblers. Ringing effort is concentrated at the STWs at Carnon Downs, Ponsanooth, Gwennap and Helston. The main target species is Chiffchaff and in particular birds of the eastern races (tristis and possibly abietinus),  though we do also monitor vagrant Yellow-browed Warblers.

Numbers of Chiffchaffs caught over the winter vary dependant on weather and access to sites, with totals for the winter of 2012/13 being 116 Chiffchaffs caught, including 13 eastern birds (117 captures including 20 eastern birds in 2011/12). The recapture rate of birds between winters varies according to ringing effort at the sites, but at our main site (Carnon Downs), of 66 birds ringed in winter 2011/12, a notable 12 were retrapped in winter 2012/13.