Out of county cannon-netting and a Dutch Curlew

With the local weather set to continue at 50mph winds and hail showers, we're not going to be doing much until the end of the year, so escaped out of county yesterday for some cannon-netting with Axe Estuary Ringing Group. Unfortunately the birds hadn't read the script and after a long (and cold!) wait we fired on the only birds that had made it across the newly-formed ice sheet in front of the cannon net: two Shelduck and a Moorhen. Just to make matters worse, the day was run as a ringing demonstration, but I hope the visitors were suitably happy with the few birds they got to see! 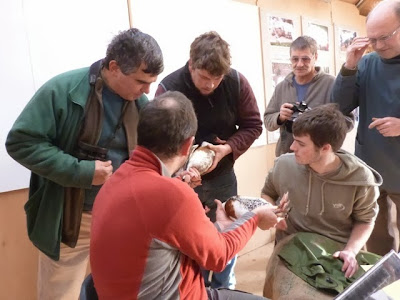 The group are particularly keen to catch Shelduck as they have a long-term colour-ringing project on these birds, so catching two new birds was better than nothing. Both were juveniles, one male and one female, so it was a good opportunity to compare the sexes side-by-side.

On our way back we stopped off briefly outside of Truro to check a dead Barn Owl on the road and after battling through brambles (scars to prove it this morning!) and perching on top of the fence along the busy road we could see it wasn't ringed, which saved the need for a death-defying dash to retrieve the bird!

After failing to find any of our colour-ringed gulls in Falmouth, in the fading light I stopped off briefly at Devoran where a roost flock of Curlew produced this rather smart colour-ringed bird. It looks to be from The Netherlands, but we'll have to wait and see. 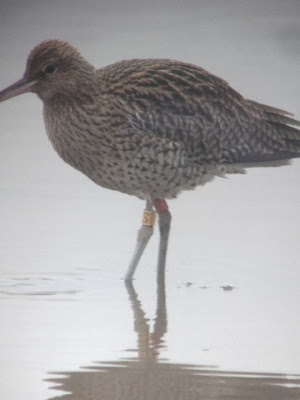 Thanks to Adrian Bayley for the group photos at Axe Estuary and Greg Wills for the Shelduck photos.
Posted by Mark Grantham at 15:54 No comments:

With the wind still too gusty for much, all I could manage was a quick walk round the boating lake at Helston yesterday whilst putting off Christmas shopping. Ignoring the temptation of some very catchable Coot and Tufted Duck, the only ringed bird there was the regular 23D8. 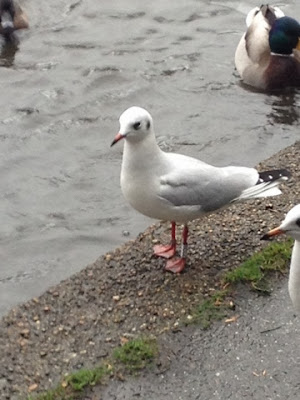 I've now seen it several times at the boating lake, so it'll be interesting to see if it's here again all winter. So if you're passing, drop in and have a look for 23D8 and don't forget to report it!
Posted by Mark Grantham at 09:52 1 comment:

This morning we were tasked with helping to remove a couple of House Sparrows from the back of one of Truro's largest supermarkets. They'd been stuck inside for a couple of months now, so once licences were sorted we were let loose.

It's rather surreal mist-netting in amongst pallets of toilet brush sets, washing powder and nappies, but we were based next to the alcohol section, so not all bad... But once some pallets were moved we could rig up 'Heath Robinson stylee' a single-shelf net at ceiling height, threaded through light fittings, air ducts and water pipes, and a full-height net between the shelving.

Remarkably, with the help of a tape-lure (well MP3-lure) we were eventually able to catch both birds darting through a small gap high up above the shelving. Both were ringed and liberated in a neighbouring garden, so let's hope this is the last we see of them.

Being so efficient at the supermarket, we used the extra couple of hours we had to stick up a few nets at Ponsanooth Sewage Works. There weren't many birds around (apart from a Siberian Chiffchaff, three Firecrest, Green Sandpiper and Woodcock), but one 40' net did catch a little group of warblers, including five Chiffchaffs (all apparently collybita) and a very smart Yellow-browed Warbler; our first of the winter. 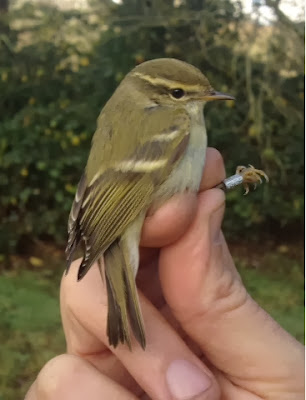 These aren't always easy to age, but this bird showed a nice hint of a central crown stripe, which is apparently more frequent in juveniles. This, combined with a rather pointed tail (if a bit fresh-looking), suggested this was a first-winter bird. 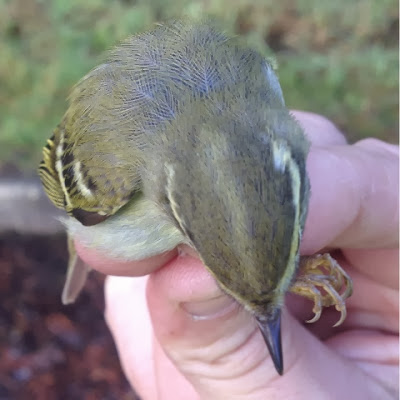 Posted by Mark Grantham at 16:28 No comments:

The forecast cold weather didn't really materialise, but we were out anyway and with a few birds in the treetops at Carnon Downs sewage works (at least 15 Chiffchaff and two Siberian Chiffchaff) we decided to chance our arm. First bird caught was an unexpected adult Magpie; a new bird for Terry. 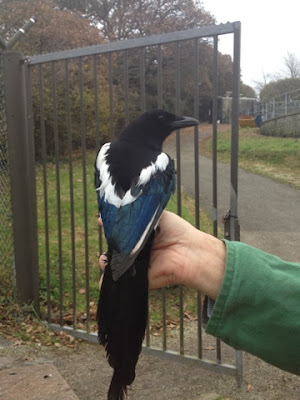 Second net round was even better, with the same net producing another adult Magpie and a Grey Wagtail; ANOTHER new bird for a now very chuffed Terry. Amazing what a random 40' net can produce! Interestingly, this second Magpie had a very old retained secondary, looking to be from a good couple of years ago.

It was a bit quiet first thing, but as the flies got moving things picked up. We ended up with 40 birds, including 10 Chiffchaffs, two Firecrest (always nice), Grey and Pied Wagtail and a very smart Siberian Chiffchaff. Although the photo doesn't really show it, this was one of the rather grey Bonelli's Warbler lookalikes, which are actually rather uncommon down here. Characteristically for these birds it showed the very long, broad supercilium. 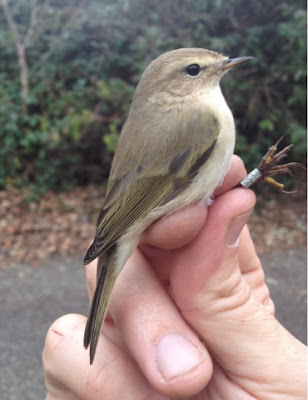 Compare this bird with these other two Sibe Chiffs caught in the last couple of weeks. The bird on the left (at Gwithian) shows more green and yellow tones with an obvious, but not overly long, supercilium with a yellow hue in front of the eye, whilst the cold bird on the right (at Ponsanooth) shows no green tones and has a very much reduced supercilium in both width and length. 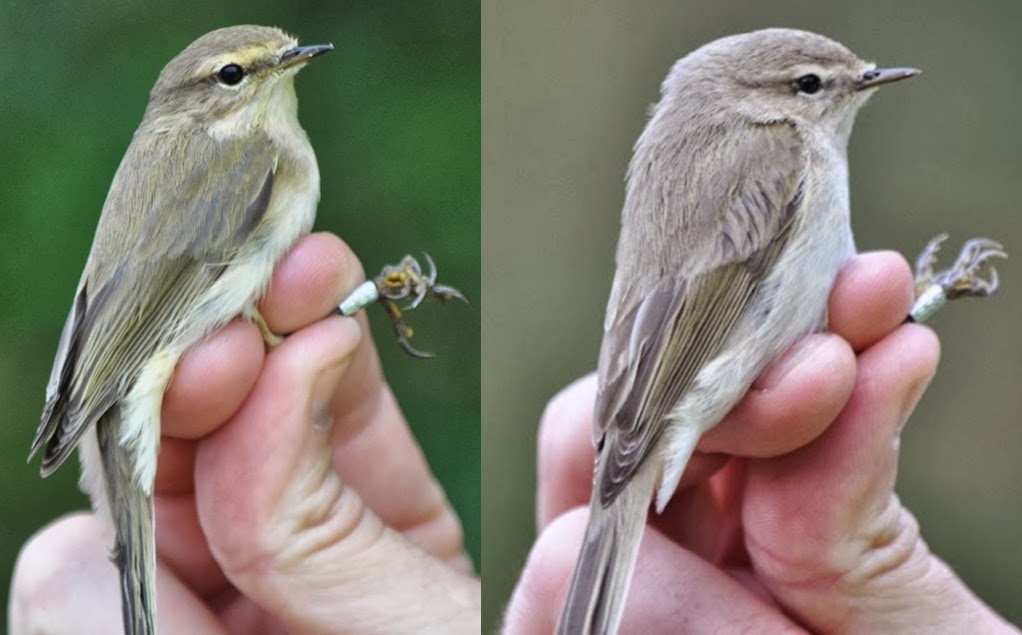 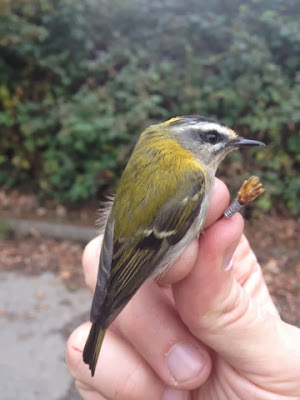 Posted by Mark Grantham at 17:04 No comments:

After a couple of failed attempts due to poor weather, we finally managed to run a ringing demonstration yesterday morning for Cornwall Bird Watching & Preservation Society (CBWPS) at Stithians Reservoir. We ran this at the feeding station in the southern cut-off to give members a chance to see what we get up to there. 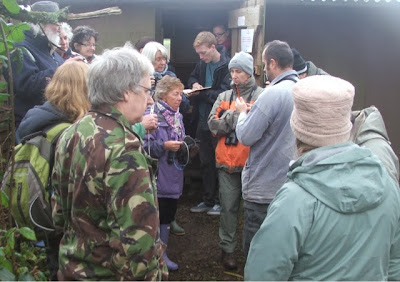 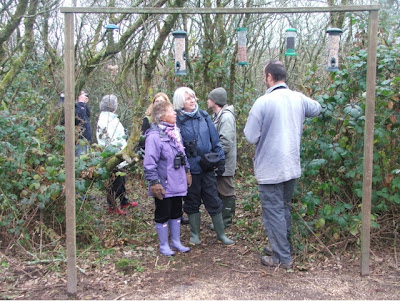 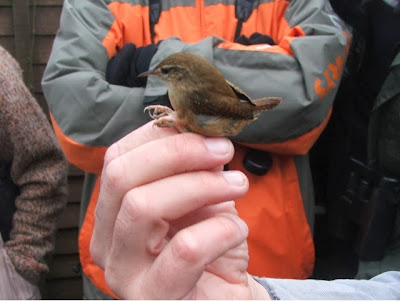 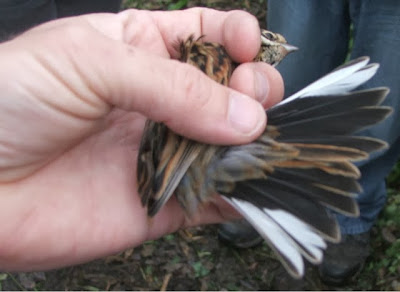 Thanks to Simon Taylor for the pics and our band of merry helpers for lending a hand.
Posted by Mark Grantham at 08:39 1 comment: