Recent high tides and stormy weather have dumped large amounts of seaweed along the south coast and large groups of gulls have been making the most of the feeding opportunity. Many of these birds have been roosting on the rocks off Swanpool and Maenporth, giving Greg Wills from the group a chance to check lots of legs for colour rings. 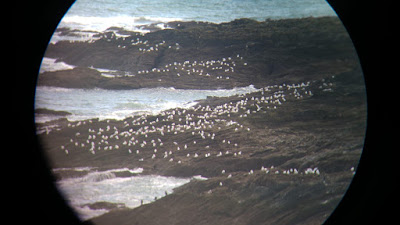 In amongst the throng of birds at Swanpool beach on 13th November, one beast stood out though, with long legs, white head and very long wings; all classic Caspian Gull features. It was also sporting a yellow ring which really was exciting, as there's never been a record of a ringed Caspian Gull in Cornwall.


Many thanks to Ronald Klein in Germany who quickly replied to confirm that this was indeed one of his birds, ringed as a chick at Grabendorfer See in eastern Germany. The island colony does hold good numbers of breeding Caspian Gulls, but it's thought that there are also numerous hybrids produced in the colony. The consensus on this bird though is that it's a pure Caspian Gull and not a hybrid. Interestingly, this same bird was also seen at Newhaven, Sussex in September, with the photo below on the Sussex Ornithological Society news page.


Also of note in the melee of birds at Maenporth was an old friend not seen for a few years. Red S:037 was ringed as a rehabilitated bird at Secret World in Somerset, being released near Burnham on Sea in July 2011.


It may well have originated in Cornwall, as it has since been seen at Newlyn (October 2011), Lizard (March 2014) and Swanpool, Falmouth (December 2014). It was actually the first bird from the project to be resighted away from the release site, so nice to still see it doing well!

Posted by Mark Grantham at 17:39 No comments:

It's been a while since I've got round to blogging, but then it seems of late we've just been looking at colour-ringed gulls and not much else! But we did receive some interesting reports from BTO recently, involving Storm Petrels recaught at Skokholm Island in south Wales earlier in the year.

The Bird Observatory recaught no fewer than 11 birds ringed by us, including four on just one night (22nd July, when 142 were caught on the island). Of these 11, six had been ringed in 2015 and 2017 at Hot Point, Lizard, with the other six all ringed on 15th July at Gwennap Head, Porthgwarra. This further highlights the link between sites in the English Channel and Irish Sea.

As part of a PhD application for one group member we've also been looking at some of our gull data from Falmouth, so thought we'd share. So across all of our gull sites we've colour-ringed 276 birds, including 199 chicks. Just in Falmouth the figure is 140 birds colour-ringed, of which 85 were chicks. These Falmouth birds have then generated 509 sightings, with 63 of the 140 being seen at least once after ringing. Some of these have only been seen once, but our most reported bird has been seen 60 times now.


Obviously the more sightings we receive the better we understand their behaviours and movements, so if you are a local birder then please keep an eye out for our blue-ringed birds.
Posted by Mark Grantham at 09:02 No comments: