With the winter weather taking its toll on the vegetation, Nanjizal still has a rather wintry feel and the leaf must be a month behind normal. Spring migration has also been very slow, with only a couple of periods when birds arrived in any numbers. The best arrival so far was over 21st-23rd April when a decent south-easterly wind and rain dropped a few birds in, primarily Willow Warblers and Blackcaps. Virtually all the birds were very light and obviously finding the cold, wet weather hard going.

One unexpected surprise for Kester though was a Bonelli's Warbler (of some sort) caught on the 23rd. This bird didn't look like the birds he had caught before in Cyprus, but similar to birds he'd handled in Greece. It also didn't look quite right for the milky-tea coloured birds from Spain. As you can see below, the obvious pale edges to the greater coverts and tertials are very fresh and not worn or bleached. If pale edges are a feature of eastern birds, it looks like it's a plumage feature rather than relating to the age of the feathers. The bird's long-billed appearance (more reminiscent of Western BW (Phylloscopus bonelli) than Eastern BW (Phylloscopus orientalis)) was maybe exaggerated by a few feathers missing from the top of the bill. Luckily the bird did leave behind a feather though, so it'll be interesting to see what the DNA comes back as! 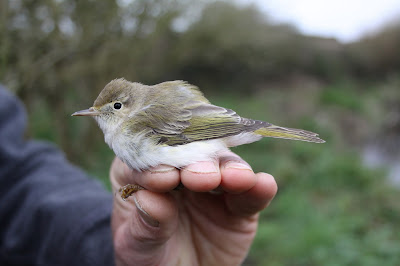 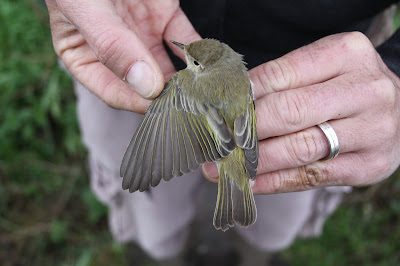 Posted by Mark Grantham at 14:52 No comments:

The end of last week saw a couple of group members back out ringing the local Dippers in Idless Woods. This has turned out to be their best year yet, with very healthy broods of four and five to ring. We were also able to catch a couple of the adults (male from one pair and female from the other), so it'll be interesting in future years to see if these are regular birds. 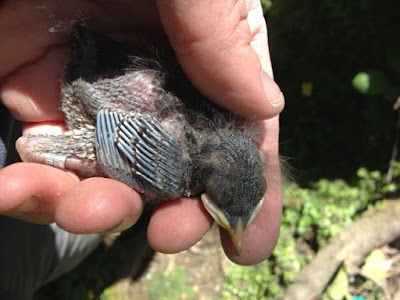 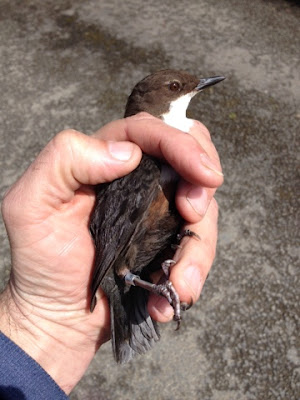 We also took the chance of a fine day to head down to the Kittiwake colony at Trewavas Head, which involves a bit of a scramble, a climb and some dodging of waves! But it's always worth the effort, with good numbers of birds on the ledges. 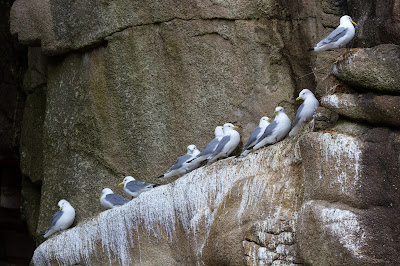 We were also able to resight 18 colour-ringed birds, including three French-ringed birds. Two of these had previously been seen at the now almost-abandoned colony at Rinsey Cliff, so it was interesting to see them moving down along the coast. One of our own colour-ringed adults from Rinsey (ringed last year) had also switched site, so it'll be interesting to see how many of these stay to breed.

Posted by Mark Grantham at 09:23 No comments:

Ringing demo and the first chicks to ring

This weekend saw the annual Cornwall Wildlife Trust wildlife celebration at Trebah Gardens, where the ringing demonstration is one of the highlights (allegedly). Over 2,500 people came along last year so it's a great event to get the word out about what amazing wildlife we have in the county. This year was a bit quiet bird-wise, but we did still manage to show people a range of birds, including Nuthatch, Chiffchaff and Coal Tits. 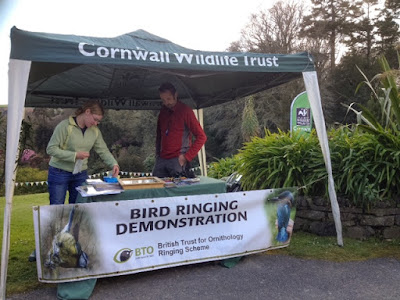 We also run a couple of walks checking what's happening in the nestboxes, but with the event being much earlier than previous years that was a bit quiet as well! Instead we taught people how to find open-nesting species and even show them Robin and Song Thrush feeding chicks and the Robin nest below on five eggs. Everyone seemed keen to get home and look in their own nestboxes, so hopefully there will be a rush of Nestbox Challenge registrations soon... 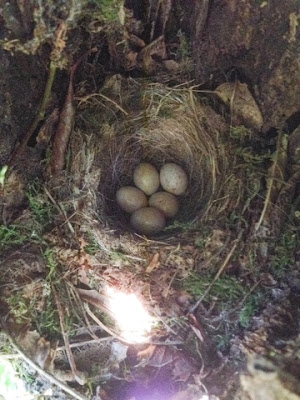 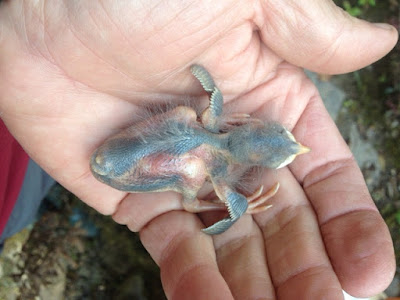 Sunday was an all-together more adventurous evening, as we paddled over to Mullion Island to ring a few Cormorant chicks. We timed it perfectly, with the biggest birds not so big that they were all running around, with seven broods with chicks big enough to ring. Cormorants are very asynchronous and some birds were still incubating eggs, and there were also many chicks that were still too small to ring. But we did manage to ring and colour-ring 15 birds, which compares pretty well to previous years (11, 19 and 7 in 2013-15).

The timing of the trips over is also variable, with this visit being earlier than the last couple of years: previous ringing trips were on 6th April 2013, 17th May 2014 and 7th May 2015. It did mean that we weren't able to count the Great Black-backed Gull nests, as most were just at the building stage. In fact, we only found two nests with eggs in, with two in each, so may have to plan another trip over to count these. 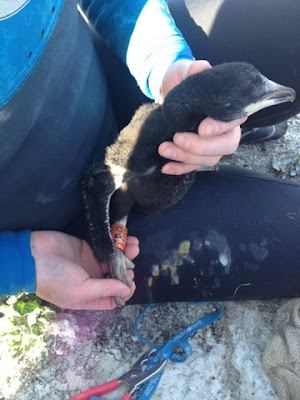 Posted by Mark Grantham at 11:24 No comments:

Gunwalloe finally gets some boardwalk!

Many months (or even years!) in the planning, we finally managed to lay some boardwalk at our CES site at Gunwalloe. The boards were ones taken up at College Reservoir to be replaced by newer boards, so we were able to relocate them to our reedbed ringing site. Considering the net-ride was waist deep in mud and water in places, this was no mean feat, but a small group of ringing group regulars suffered the mud to get the job done. 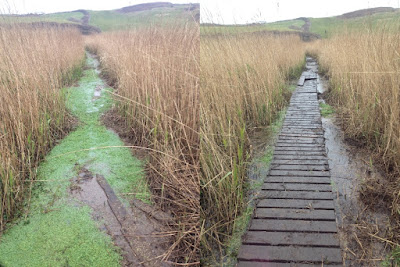 The before and after photo above gives an idea of the vast improvement this will make for accessing the site!
Posted by Mark Grantham at 13:42 2 comments: