Ringing at Nanjizal, Cornwall's other CES

After detailing some of the highs and lows of our CES at Gunwalloe, here Kester Wilson gives a flavour of ringing in Penwith, where he also runs a CES at Nanjizal.

"The early part of the year was quiet, with most of my time spent improving the habitat on site. Last year's clearance around the bird feeders continued to improve the catches of finches and Lesser Redpoll, Siskin, Brambling and last year's Cirl Bunting were all caught in the first few months of the year. 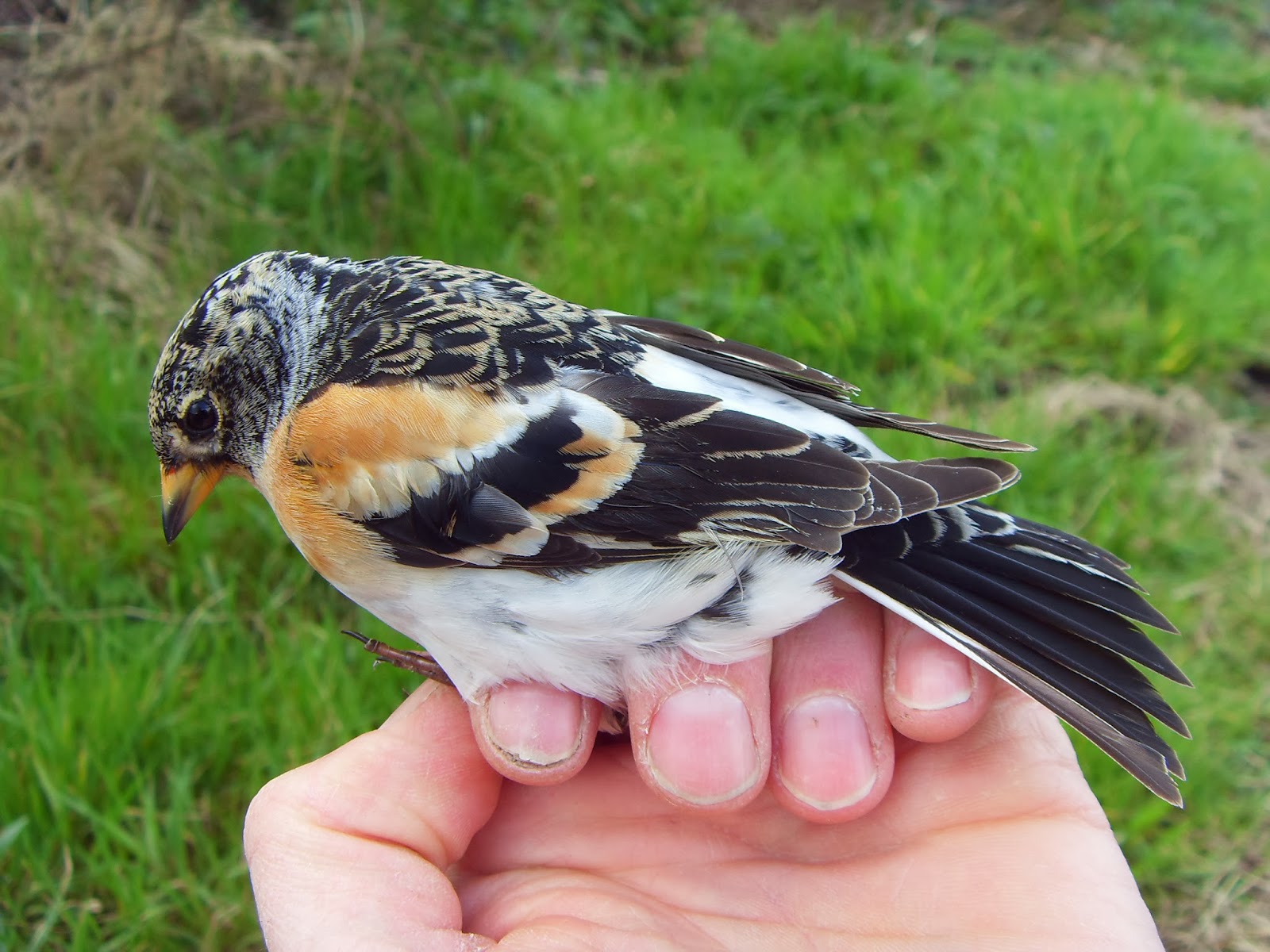 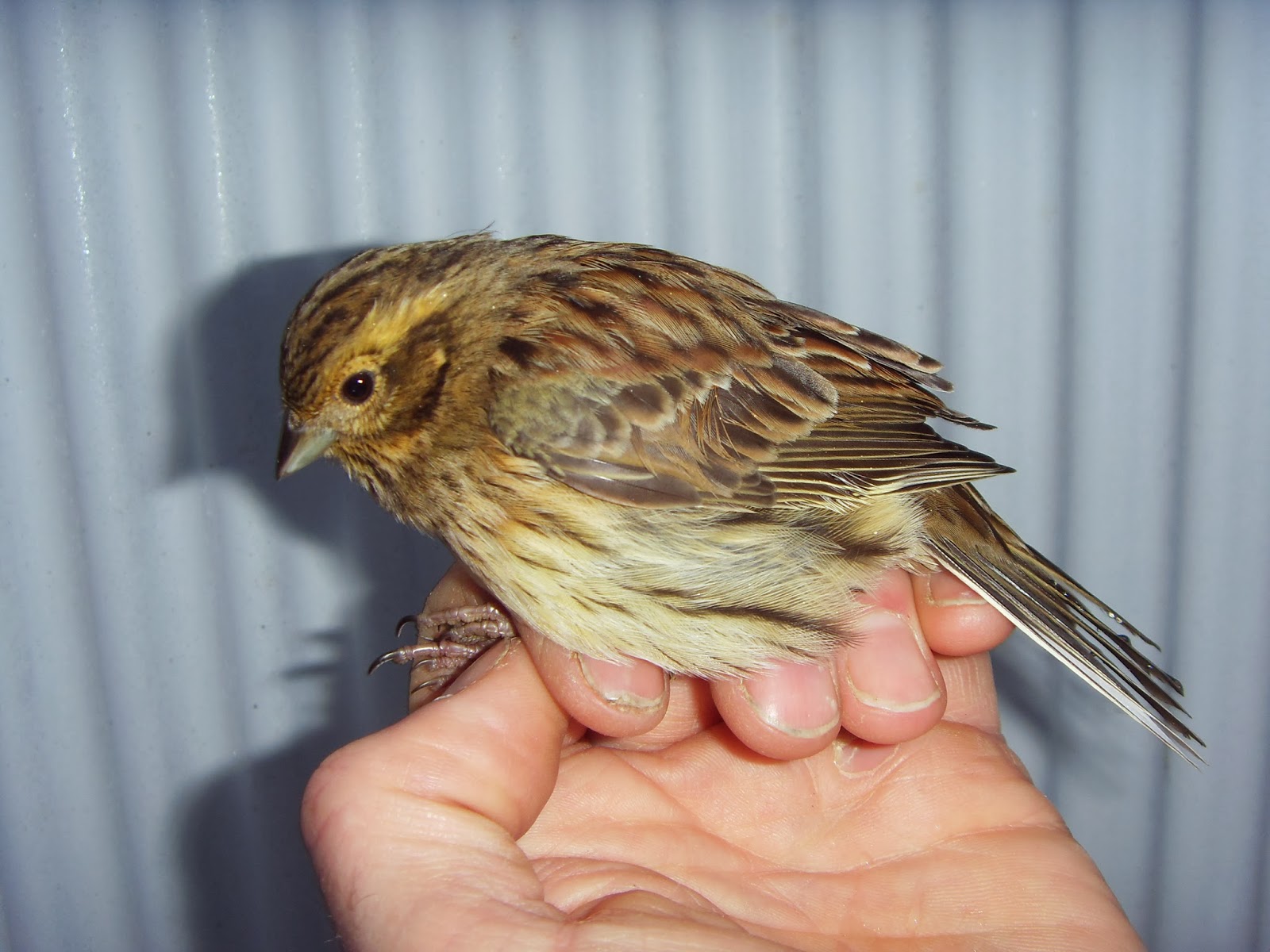 Every year has its quiet times and if you're lucky a few purple patches. During spring 2013, the purple patches were few in number, with winter dragging on well into spring. In late March, the wind turned southeast and many birders noticed large numbers of Chiffchaffs in the far southwest of Britain. On 25th March, my nets were opened and 118 Chiffchaffs caught, two of which were controls: DLL278 was ringed at Icklesham (East Sussex) on 18/9/2010 and EKX125 was ringed at Portishead (Somerset) on 1/7/2012. Soon after, details of three more controls were received and gave a further indicator that most of the birds involved were destined for southern Britain. EPL449 was ringed at Nanjizal on 30th March and found dead at Crew (Somerset) on 1/5/13, another ringed on 26th March was controlled a few weeks later at Slapton Ley (Devon), and another ringed during the same period  on Skokholm (Dyfed) stayed to breed at Nanjizal instead of heading back further north.

Compare this to the spring of 2011, when prolonged periods of southeasterly winds brought larger numbers of abietinus Chiffchaffs than usual and in amongst them were two interesting controls. One ringed at Sul Panaro, Italy, on 2/10/2009 and controlled on 4/5/2011 and another ringed at Giessen, Germany, on 26/9/2010 and controlled at Nanjizal on 7/4/2011.

Spring/summer 2013 didn't produce any further noticeable falls, just the odd surprise turning up in a net; the most surprising being a female Subalpine Warbler caught on 5th July. 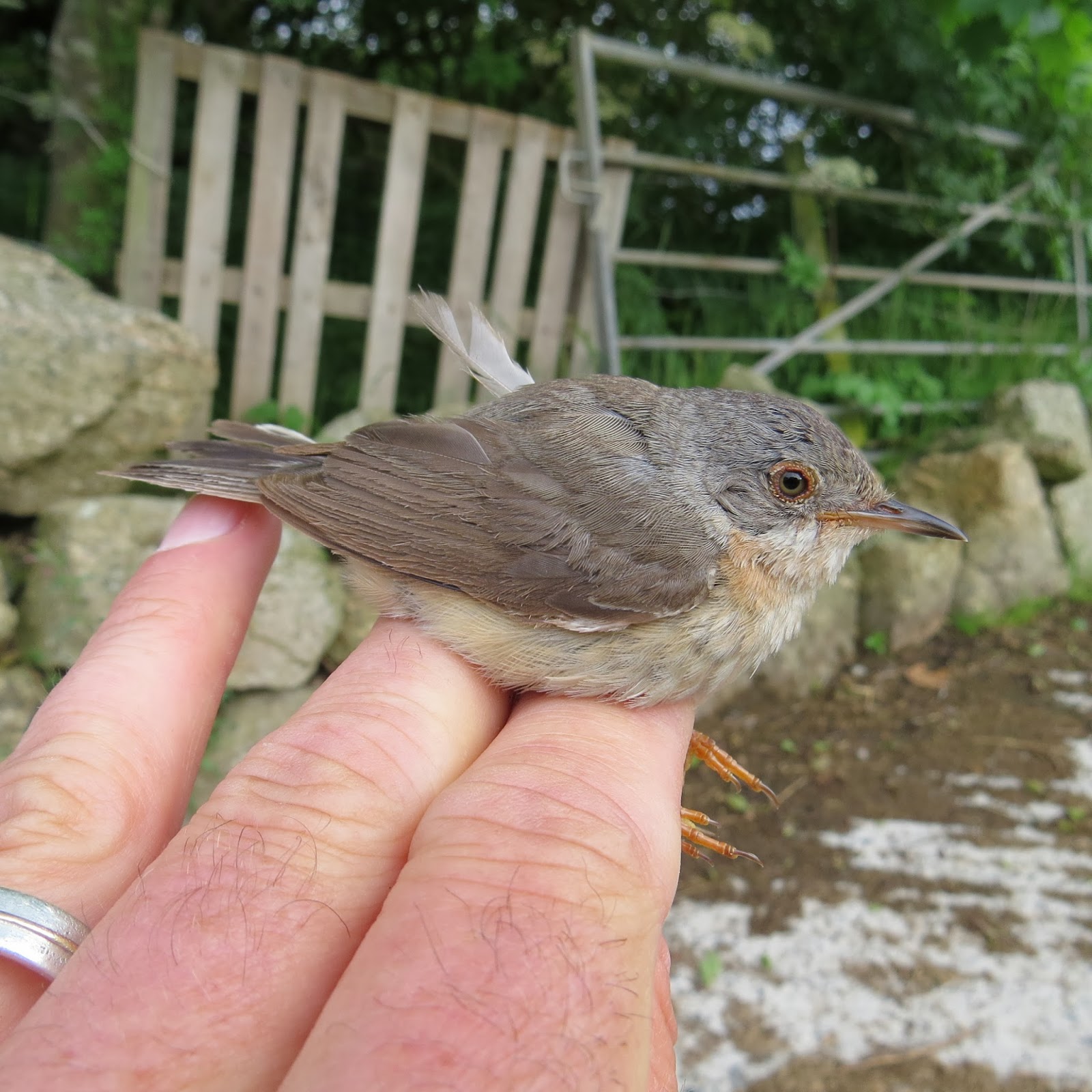 After last year's poor breeding season, it was nice to be catching good numbers of young birds on CES and most species seem to have done OK, with both Sedge Warbler and Dunnock doing very well, and only Blackcap having a poor year. See below the numbers of young birds ringed of selected species during the whole CES season in 2012 and to the end of July only in 2013.

For the first time I have used tapes at Nanjizal this autumn and my change of heart came with the chance of purchasing cheap, small MP3 players with decent rechargeable batteries.  Once the CES visits were completed I started to play Grasshopper Warbler just before sunrise and I am sure other people have noticed that Gropper tapes also work very well for Sedge Warbler: I later found that you can pretty much play any warbler and other species will respond. Up to 24th September, I have now ringed a surprising total of 53 Grashopper Warblers!

Further confirmation of a good breeding season for Sedge Warblers sees my annual total now over 500, a high percentage of which were trapped around the Gropper tape. An Aquatic Warbler also seemed to find it appealing on the 20th, only the second bird seen in the UK this autumn! 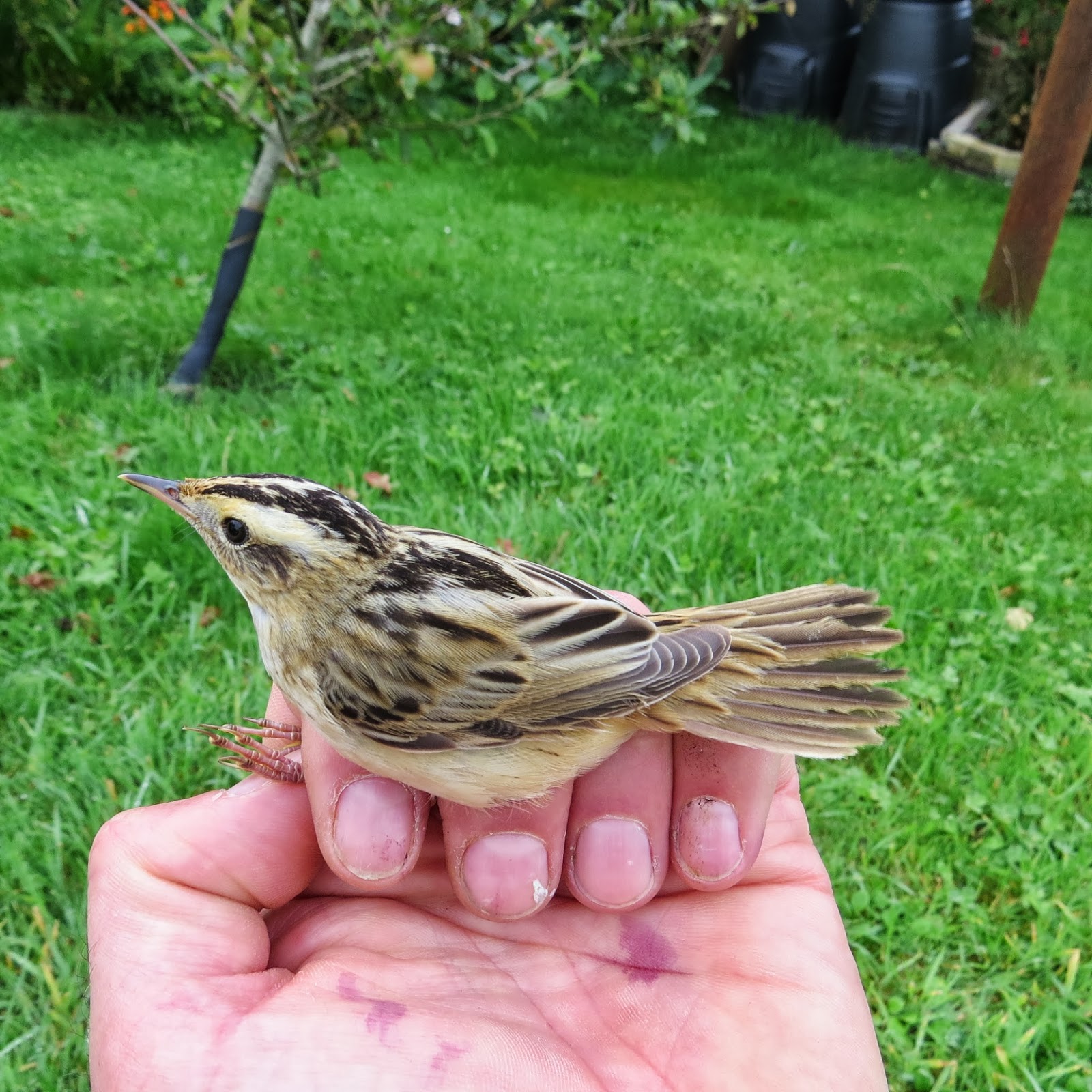 Until last week, numbers of Blackcap had been unusually low, but they have now arrived en masse and the 20th alone saw 98 being ringed, bringing my annual total over the 400 mark. As well as the large numbers of birds, the last few ringing sessions have produced the afore-mentioned Aquatic, Marsh Warbler (22nd) and a Wryneck (24th). A few recoveries have also come in over the last few weeks and the Skokholm-ringed Chiffchaff reappeared in a net a few days ago." 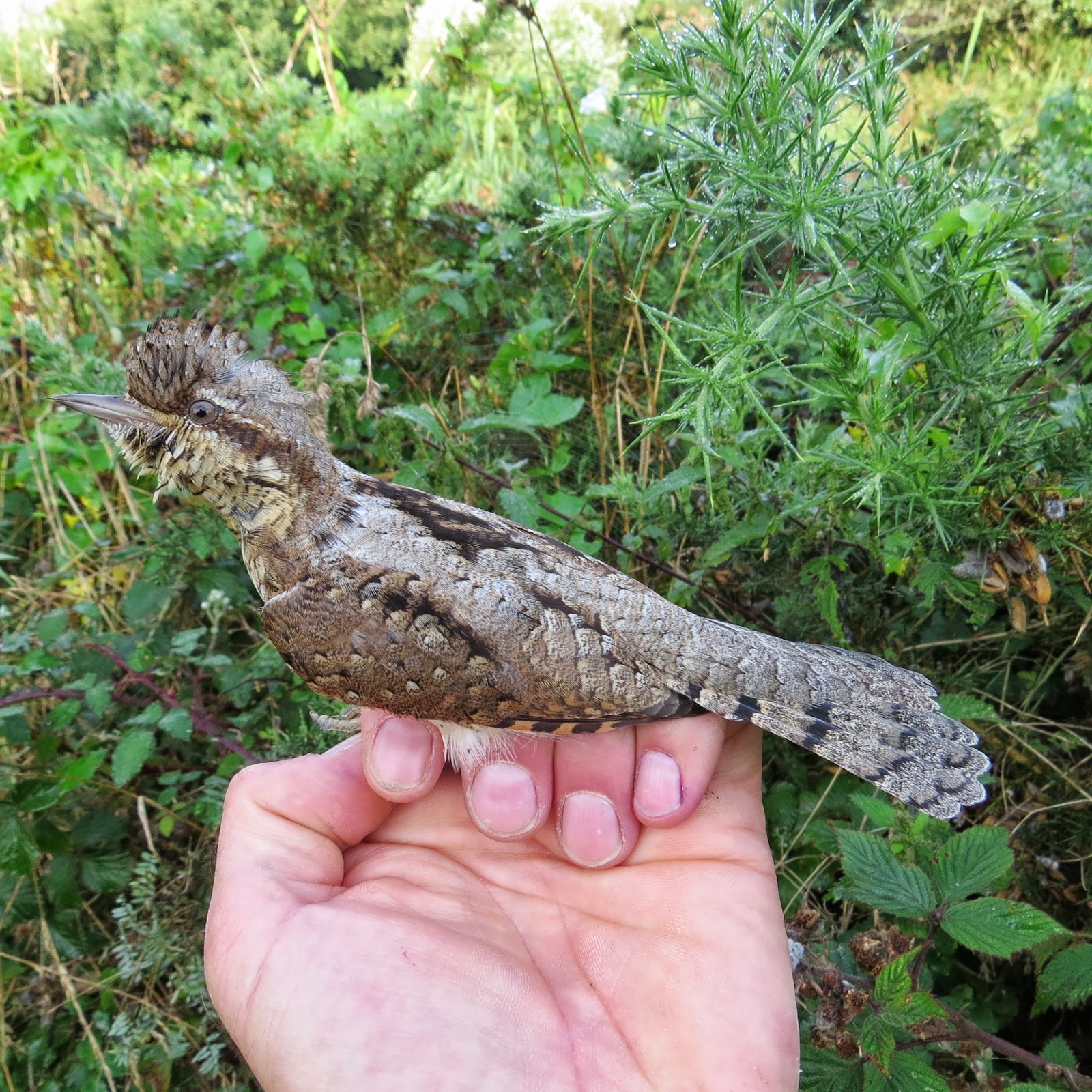 The RSPB office in Penzance recently passed across sad news of the demise of an injured Osprey. What is more unusual is that this bird was ringed, and a Swedish ring at that!


92A07295 was found at Relubbus on 30th August and despite being cared for at Mousehole Bird Hospital it died soon after. We've sent the detailson to BTO who will send them on to the Swedish ringing scheme, and we'll post the details here when we receive them.

There is just one previous report of a ringed Osprey in the county, which was a bird ringed near Inverness in 1994 and seen in St Columb Major in April 1997, before being killed hitting wires in Scotland three weeks later. Even looking further afield, there are only 23 reports of Swedish-ringed Ospreys in the UK, so this is a very unusual record. The map below shows all Osprey movements to/from the UK, from the BTO's online ringing report. 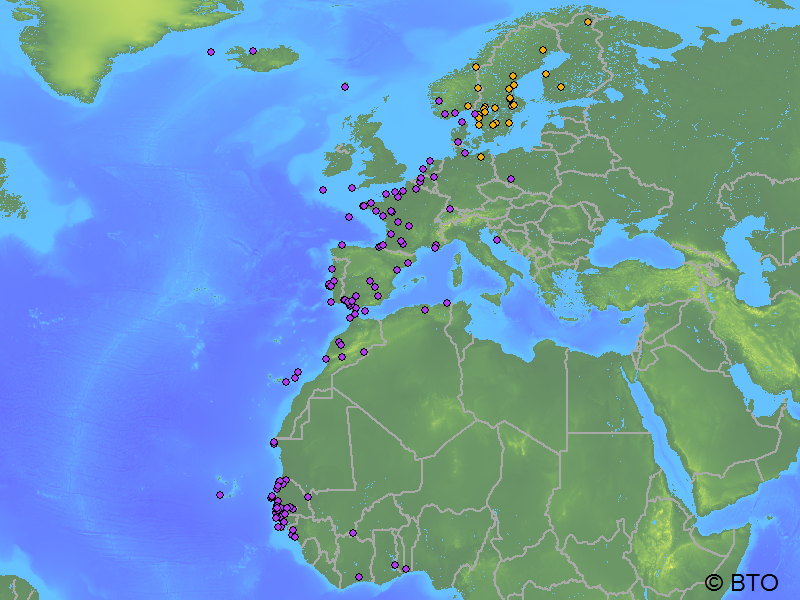 Posted by Mark Grantham at 09:15 No comments:

Email ThisBlogThis!Share to TwitterShare to FacebookShare to Pinterest
Labels: osprey

The BTO has just released the 2012 Online Ringing Report, which makes fascinating reading. The various reports don't just show national figures, but also break them down by county, so there's plenty in here for Cornish birders.

The Cornish ringing totals for the year (here) show 7,161 birds ringed which is well down on the last few years, symptomatic of the poor breeding season. The top five species ringed in the county (with 2012 totals for comparison) were:
Notable in the totals were the only Hoopoe and Iberian Chiffchaff to be ringed in the UK in 2012 and also Spotted Crake (one of only three ringed nationally), Wood Sandpiper (four ringed of just eight nationally) and Aquatic Warbler (two of only seven ringed nationally).

Perhaps of more interest though are the recoveries that these, and other, ringed birds generate (here). Considering the relatively low ringing total for the county (not enough ringers!), most of the most interesting recoveries are of birds ringed elsewhere and seen or found here. But amongst the 1,803 recoveries involving the county, the highlights included colour ring sightings of:
recaptures of: 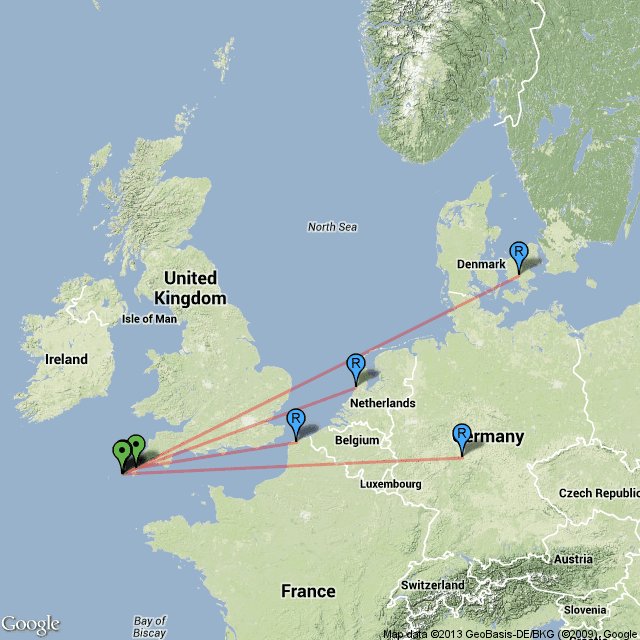 and the unfortunate dead birds: 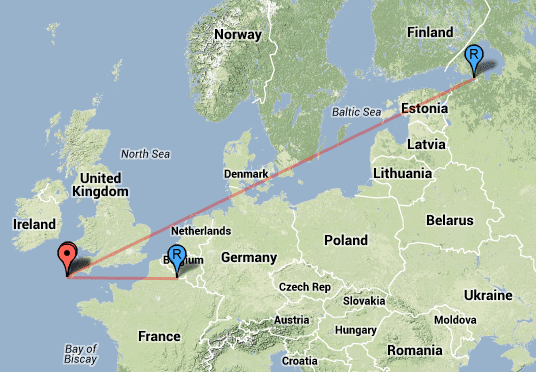 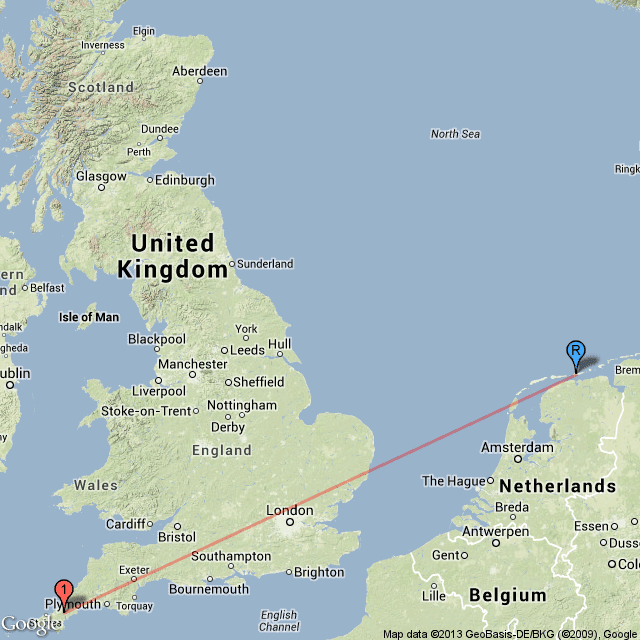 Most of these recoveries of ringed birds came from birders and members of public, so if you've been lucky enough to find a ringed bird or see a colour-ringed bird, report it online via www.ring.ac or contact us direct and we'll pass it on.
Posted by Mark Grantham at 20:32 No comments:

Terrible photo of a Mediterranean Gull (iPhone-scoped) but a fascinating bird! Red PHJ6 was at Hayle estuary this afternoon and the joy of the internet tells me that it has a great history. Ringed as a chick in Poland in May 2007, it was first seen in Cornwall in February 2008, at both Marazion and Hayle estuary. 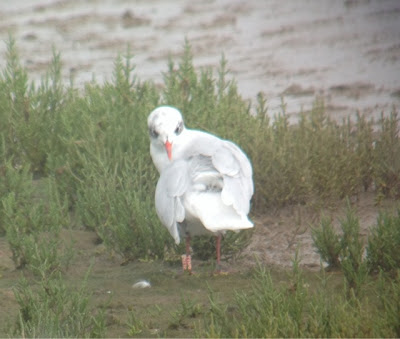 In April 2009 it was seen at Badminston Gravel Pit, Hampshire, paired with another colour-ringed Med Gull (Yellow 2A34). Now interestingly 2A34 was ringed as a chick in Lancashire in May 2007, but has since been seen in Dorset (April 2011) and remarkably by me at Men-Aver beach, Cornwall (November 2011 and January 2012). So I've now seen both of this pair in Cornwall!

Back to PHJ6... Post-Hampshire, it was seen in Devon in July 2009 and then back in Cornwall around St Ives and Sennen Cove in October-November 2009. It was then seen back in Devon in July 2011 and August 2012, before being seen again on Hayle estuary in September 2012 and then again this afternoon.

The coincidences go on, as over the summer a couple of us went over to Guernsey to help with Paul Veron's colour-ringing project, cannon-netting birds on Chouet Landfill. On the trip we all camp in Paul's garden, where he traps a few gulls in the winter and it was here that White 3CT1 was ringed, a Herring Gull also on Hayle estuary this afternoon! 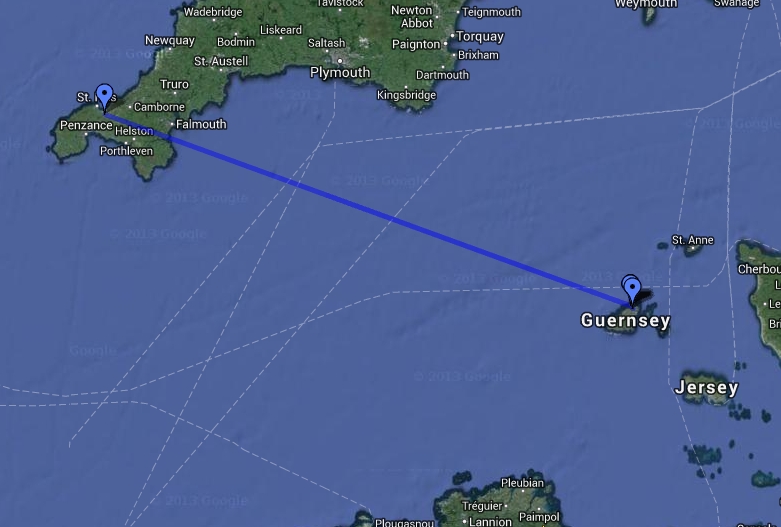 So all in all a pretty productive stop off this afternoon and just goes to show how colour-ringing can tell us so much about what our birds are doing.
Posted by Mark Grantham at 17:46 1 comment:

Last few Stormies of the year

With the weather looking nice and calm and overcast, with a new moon to boot, we decided on one last Storm Petrel session on Wednesday night. We were hoping for something to liven up the day after a paltry 14 birds in the morning at Marazion Marsh, where there was still no Aquatic Warbler. AND we've now been beaten to it by Devon, with one seen at South Milton Ley yesterday morning.

So off to Hot Point we went, with just two nets set. It was pretty quiet (perhaps not surprisingly for September), but we did ring another six birds before giving up early at 1:30am. Interestingly, all bar one of these birds were already well into moult, as on the bird below, suggesting that these are non-breeding birds. Breeding adults are thought to moult slightly later in the year; starting in October.

The primaries are too worn to really guess if these are 'juvenile-type' or 'adult-type' (based on how pointed/rounded they are), but also note the very nice white-tipped greater coverts, shown in both newly-fledged juveniles but apparently also older birds. 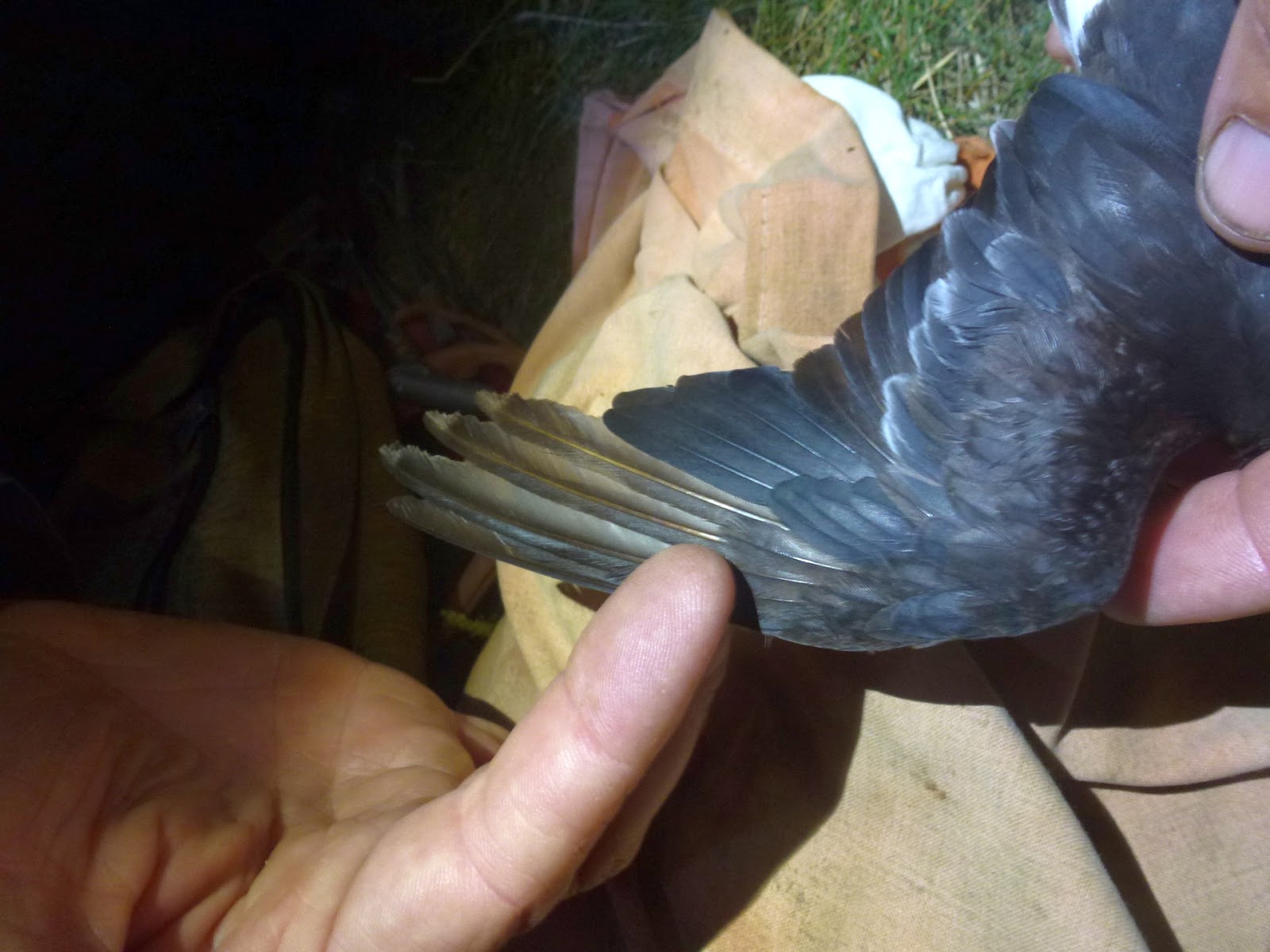 Posted by Mark Grantham at 11:14 No comments:

Another Aquatic-less day, but perhaps an Estonian Arctic Tern instead?

With the wind hinting at turning to the east, we headed to Marazion this morning in the hope of a late Aquatic Warbler. But sadly still no luck, although 32 birds caught wasn't too bad considering how quiet the reedbed seemed. These were mostly Reed Warblers, though one of the driest net rides did catch this rather smart female Kingfisher (female by virtue of being greeny-blue instead of bluey-green) and almost caught a passing Common Sandpiper. Overnight the wind is proper easterly though, so maybe tomorrow will be the day... 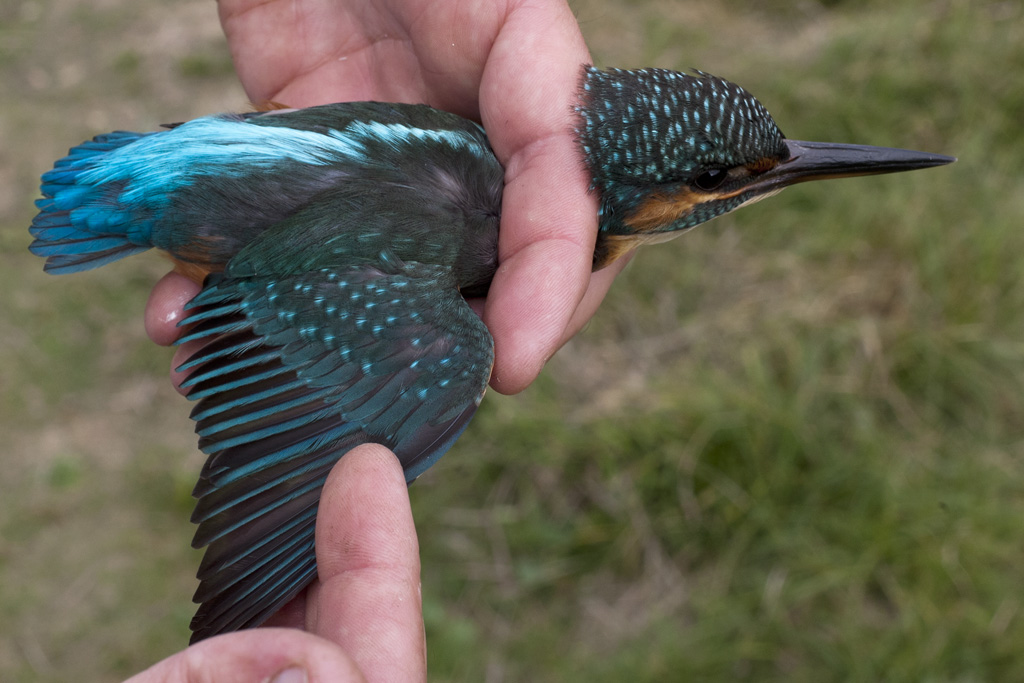 A bit of extra interest for the morning came with the delivery, via RSPB, of a GPS data logger that was reported on an injured tern at Sennen Cove on Saturday. Unfortunately the bird died but the second finder only removed the data logger and not the ring, so we're still a bit in the dark as to what the bird was and where it was from! Rumour has it though that an Estonian-ringed Arctic Tern caught in Grampian recently also had a similar logger, so here's hoping... 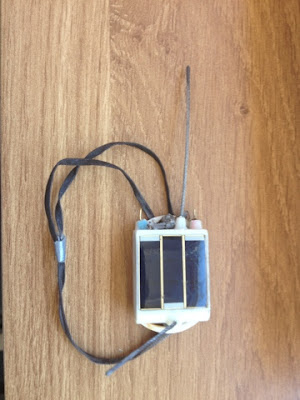 We won't find out for a while though as the logger has to go back to the manufacturer (in Poland) to be downloaded to ID the bird. For info, the aerials allow the GPS data to be downloaded remotely to a radio base-station once the bird is back on its breeding grounds. So for those with 1107 € to spend, check out the technical specs here.

Thanks to Tony Mills for the Kingfisher photo and Terry George (Sennen Cove Birdwatching), Kester Wilson and Dave Flumm for eventually getting the logger to us.
Posted by Mark Grantham at 12:39 No comments: