Recently we've been going back through some records and making sure that all of the French colour-ringed gulls seen on Looe Island (or more correctly St George's Island) over the years have been processed at the BTO end, thanks to the efforts of Claire the Warden's Assistant. There's been a Great Black-backed Gull colour-ringing project on the island since 2010 and Claire's efforts reading the colour rings are key to the success of the project. More details of the project can be found on the Cornwall Birds website.

But in amongst the gull records was a sighting of a colour-ringed Shag which is pretty unusual in the southwest. Claire photographed the bird by the jetty in December and it turns out it belonged to a French project, perhaps not surprising considering the closest UK projects are in west Wales and southern Ireland. K26 had been ringed as a chick in 2015 on Chausey, a small group of islands off the Normandy coast, geographically part of the Channel Islands group and managed as a bird reserve by the Groupe Ornithologique Normand. 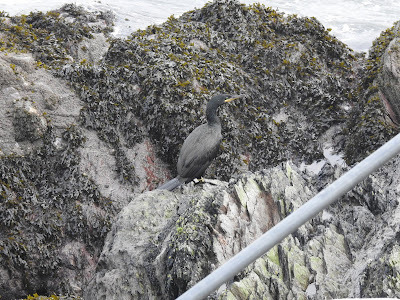 It turns out that this is just the seventh record of a French-ringed Shag to be found in the UK. Of the previous six, three have been in Cornwall, sadly all young birds found dead in fishing nets (in 1982, 1984 and 1985). Of the other three, two were also in the southwest, found dead on the Isles of Scilly in 1981 and in Devon in 1989 (actually ringed 11 years earlier). 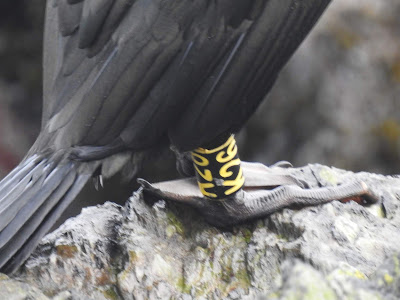 The only other record was also from the same French colour-ringing project, of a bird ringed as a chick in 2017 and seen later that year in Sheringham, Norfolk. The project on Chausey has ringed 1550 Shag chicks and remarkably these are the only two birds to have been seen in the UK, with the only other 'international' movements being two birds seen in The Netherlands. It's quite remarkable that these birds don't wander more widely, but know we all know what to look for we can hopefully find some more!

Thanks to Claire on Looe Island for sorting out all the records (and spending hours reading colour rings) and to Fabrice Gallien in France for the information on the birds and the project.
Posted by Mark Grantham at 11:17 No comments:

It's been a long time since we've blogged, but what better time to change that than New Year. Today was a rare calm day and despite not being very cold we decided to have a couple of hours at Gwennap Sewage Works anyway. The vagaries of ringing at sewage works is that we often only use the smallest size rings (AA) and today was no exception. In the two hours (and just three nets) we ringed 28 Chiffchaffs, including this very smart tristis Siberian Chiffchaff. Unfortunately we didn't recatch any ringed birds from last winter (when we ringed 44 Chiffchaff here), but once the colder weather arrives I'm sure we'll be catching more. 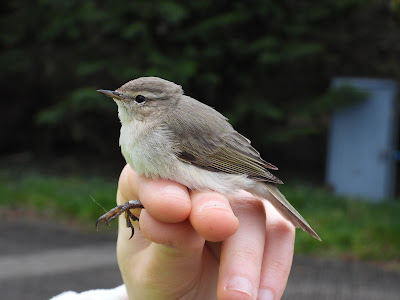 There were well over 40 Chiffchaff on site (and two Yellow-browed Warblers), so plenty more to keep us occupied on the next calm day. The bycatch wasn't too bad either: Firecrest, two Long-tailed Tits and the obligatory Wren. 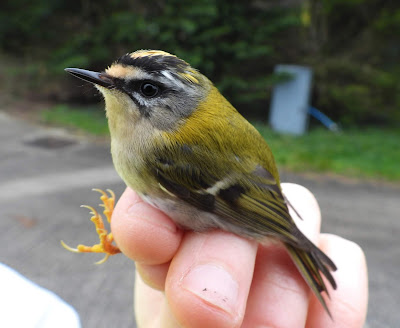 Posted by Mark Grantham at 15:40 No comments: