With the wind dropping for a couple of days we took the opportunity to get the Meadow Pipit triangle up for the first time this autumn. We decided on Gunwalloe, as we could ring in the reedbed at the same time, hoping for some late warbler interest.

Over yesterday and today, we handled 134 birds (123 new and 11 retrap) of which 81 were Meadow Pipits. Not too shabby for so early in the autumn, but there were lots of birds passing, but most chose to settle just outside and around the triangle! But it was a good chance for new recruits to get to grips with a nice species with a useful moult pattern.


We also saw a bewildering aray of colours in these birds, with most typically quite bright olive green, but we also saw some rather brown birds, a very grey bird and also one with very distinct orangey flanks and upper breast (but still just Mipits!). It was unusual that these paler birds also had very pink legs and feet, compared to yellow on the greener birds. More on these later in the autumn... 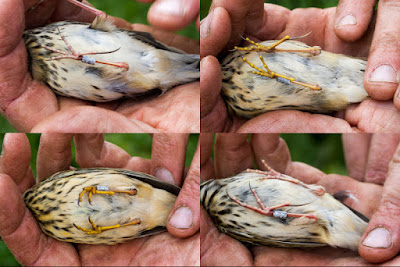 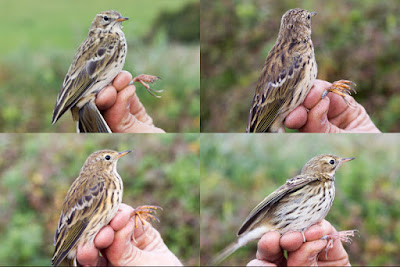 The reedbed nets also produced a few late warblers (two Sedge, four Reed and five Cettis's, including one ringed as an adult in 2011), Stonechat and a smart Kingfisher. A single extra net also did us proud with a Garden Warbler (first ever caught at Gunwalloe) and two Firecrest (also the first caught here!). 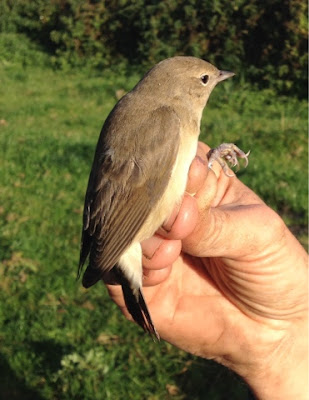 We're not used to sharing the overflow car park at Gunwalloe with anyone, especially not at 6 in the morning, so it was a surprise to find it full of vans, lorries and 30+ cars. A quick chat with the security guards later and we found out this was in fact a day of filming for Poldark. We did invite the main man to grab his scythe and clear a new ride, but he declined... 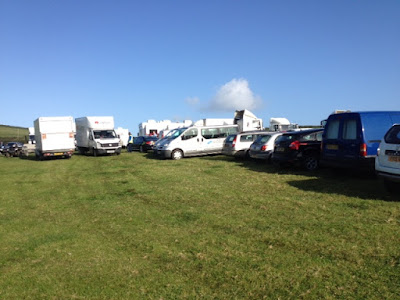 The BTO has recently released the 2014 online ringing report which, for the first time, includes information on nest recording totals and also timing of breeding for many species. The report is freely available on the BTO website and is well worth a look.

Looking just at the figures for Cornwall, the contribution the five-year-old ringing group has made, to nest recording in particular, is clear from the annual totals. Obviously the totals are due to the efforts of many different recorders, but I think group members can take some worthy credit. 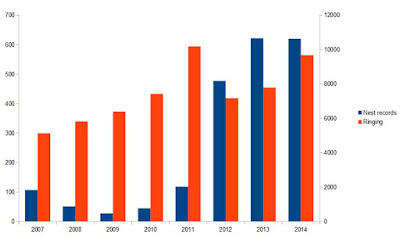 The online report also details some of the more interesting movements of ringed birds reported in 2014, and some of the highlights involving Cornwall include: 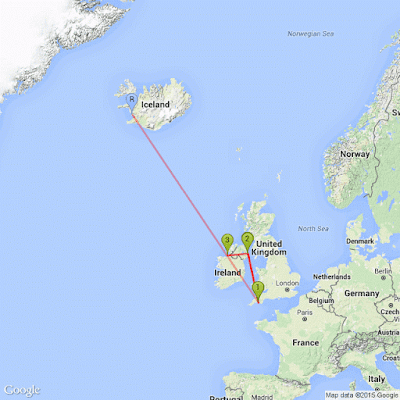 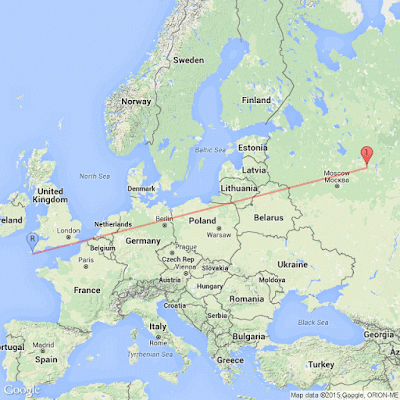 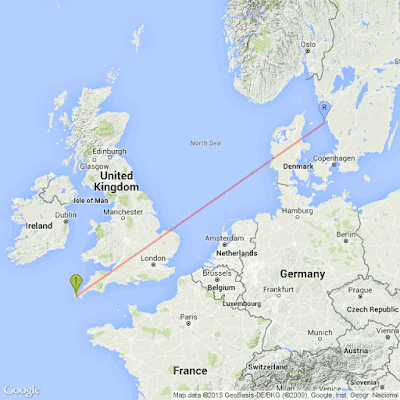 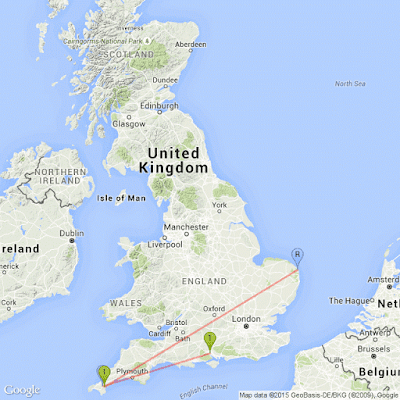 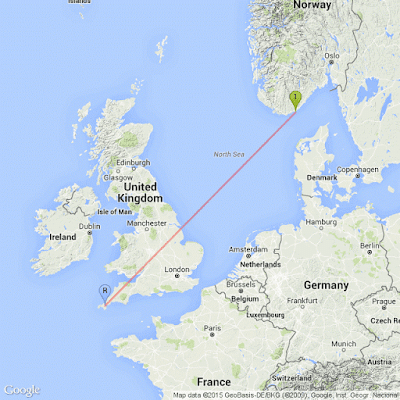 Posted by Mark Grantham at 14:18 No comments:

Up-country warblers and a lesson in coverts

We recently received details from the BTO of two warblers caught on our penultimate CES ringing session at Gunwalloe on 16th August, both originating from up-country. Reed Warbler D992026 was ringed at Squire's Down, Dorset, on 11th August so had made the take just five days to make the 230km trip down to Cornwall. It almost certainly did it in one go though, and had also had time to put on some pre-migration weight, fattening from 11.2g to 12.4g in those five days.

An altogether different bird was Sedge Warbler Y941821, ringed at Icklesham, Sussex, on 6th August 2013. You then wonder if this bird chose different autumn migration routes as a juvenile and adult, now coming further west, or was this just coincidence.

The only other ringing of late has been a bit of garden ringing for new trainees, but it's always good to catch some instructive birds. The Blue Tit below very nicely shows the contrast between retained juvenile coverts (dull greeny-blue) and moulted adult-type coverts (blue). This bird had moulted all bar one of its greater coverts, the carpal covert and just the smallest alula feather, so see if you can identify them all in the pic! 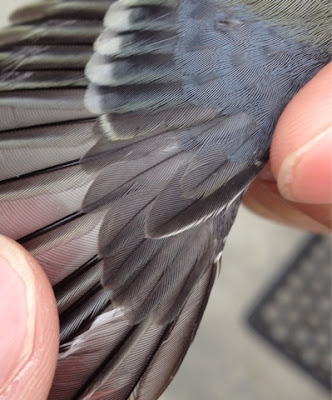 As an aside, I also dropped into Devoran before high-tide in the evening to check the roosting Curlews, to find two colour-ringed birds. We think the below might be a Scottish bird (the single yellow ring was coded BI) and the other bird looked German, but refused to stand on more than one leg in all the time I was sat watching! 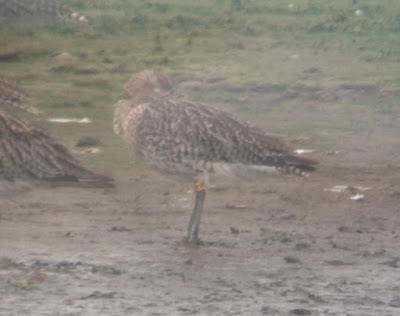 Posted by Mark Grantham at 08:18 No comments:

Instead of using our large wooden roosting box, last night we used a pop-up tent to roost some Swallows caught in the reedbed at Gunwalloe. The video below shows them being released at dawn, with all birds successfully dry and safe in the roomy tent.

Although the birds came in to roost very late, of the 350 birds present we caught 76, including a recapture of a bird we ringed in the Gunwalloe roost in July 2014 and also a bird ringed on the Isles of Scilly on 20th August, so heading completely the wrong way in autumn! What was equally surprising was that 24 out of the 76 birds caught were adults (32%), compared to 27 out of 284 (10%) ringed at roost earlier this year.
Posted by Mark Grantham at 10:05 No comments:

Blyth's Reed Warbler at Nanjizal - a first for Cornwall

In what didn't look like overly-promising weather, the regular autumn mist-netting at Nanjizal continued this morning, producing 93 birds, including five Reed Warblers, four Grasshopper Warblers, three Garden Warblers and what must surely be one of the birds of the autumn in the county! Blyth's Reed Warbler is a long-overdue bird for Cornwall (with a single record from Devon eclipsed by five in Dorset and no fewer than five on the Isles of Scilly), but this didn't detract from the excitement of finding one in a mist-net!

So here are just a few photos and details of the bird, with no doubt more to follow... 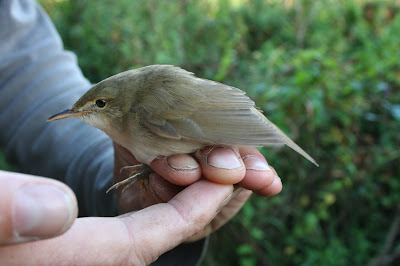 As if we need to plug the site even more, but any visiting ringers wanting to join the ringing group at Nanjizal can find out more details elsewhere on the blog.
Posted by Mark Grantham at 21:52 No comments:

Final CES of the year

This morning finally saw the end of the CES season at Gunwalloe. With the rides getting wetter and wetter, we're not overly sad to see this last session done! The total of 30 birds seems low but was the highest visit 12 total yet and did include a Kingfisher: only the second ever caught at Gunwalloe.

Whilst we missed three visits mid-season due to poor weather, it was still a very productive year, with more birds caught on visits 10, 11 and 12 than any year since we started in 2011. In fact the year total of 366 birds (315 individuals) was the highest since the outstanding 676 in the first year we ran the site.


The change in the annual total is primarily driven by catches of Sedge and Reed Warbler, but the table below also shows interesting changes in some species, in particular the crash in Reed Bunting numbers.


The fact that just two Reed Buntings were caught on CES this year seems incredible given the double-figure numbers in every other year.