I don't mean ageing as in the dark art of knowing if that dappled Herring Gull is a third or fourth calendar year bird, but more some of the interesting changes in plumage and bare parts we see as our colour-ringed Herring Gulls grow up.

W:245 was ringed as a chick on the University of Exeter campus in July 2018 and has been seen just seven times at various sites local to Falmouth since. It's interesting to look at how its bill colour has changed this year though, seen in the montage below. 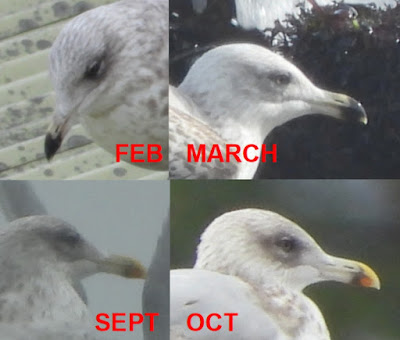 It's also interesting to see how moult progresses through the year as birds rapidly change appearance. W:178 was also a chick ringed in 2018, this time in the middle of Falmouth town, and has been seen eight times since. Both photos below show W:178 at Stithians Lake, in June and September, but note how quickly it has grown through new flight feathers (with 'mirrors' on the tips) and also adult-type wing coverts.

Some birds really do change appearance in a matter of months as well. W:249 was also a 2018 campus chick and has been seen eight times in the local area. Below are a few photos of W:249 just from this year and the change is striking, although photos can be deceiving as the bird looks to have taken a step backwards in its moult in September!

Posted by Mark Grantham at 15:57 No comments: