Spring is in the air

It hasn't really felt like spring the last couple of mornings, with frosty cars and freezing cold metal poles! But once the sun was up, Dunnocks and Chiffchaffs were singing and Goldcrests displaying to each other at the sewage works, so things are definitely getting going.

But there's still plenty of signs of winter around, with this rather subtle Siberian Chiffchaff one of the last birds ringed this morning at Carnon Downs STW. It showed quite a lot of green tones to the upperparts and tail, but was nice and plain underneath and also had the distinctive long supercilium we see of some Sibe Chiffs. There was also a remaining Yellow-browed Warbler, but even this was darting round wing-fluttering at a Goldcrest! 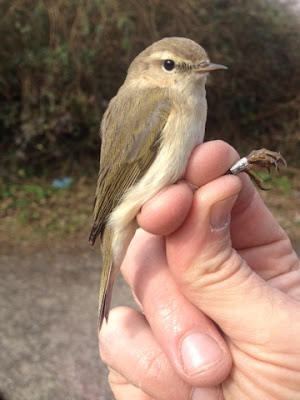 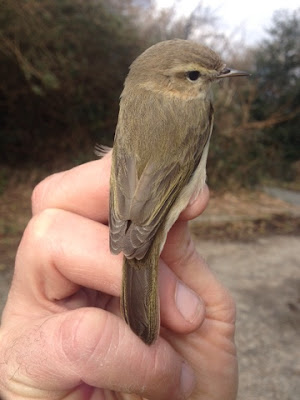 In fact the last bird of the morning could be a sign of winter of a sign of spring, as this male Blackcap could wel be a wintering bird, but the fact it had a good amount of pollen on its forehead might indicate it was travelled from points south recently. We did look around for any pollinating trees nearby but even the local catkins weren't producing much pollen yet. 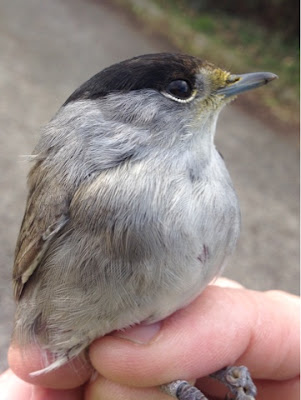 But the fact that we only caught three Chiffchaffs at Carnon Downs STW this morning and just one at Gwennap STW yesterday is perhaps a sign that birds have already started to move north, or at least have other things on their mind...
Posted by Mark Grantham at 17:01 No comments: