With the last of the (supposedly) calm seas for a while, we took the chance to get over to Mullion Island to ring any surviving Great Black-backed Gull chicks. At the start of the month we counted at least 59 nests with 146 eggs/chicks, but we know that survival is incredibly low to fledging, so we never know what to expect.

Worryingly the first chick we found on the island was tiny, perhaps only a week old and far too small to ring. With most chicks on Looe Island a good size now (we visited two days ago to ring them there) we wondered if Mullion birds were nesting far later and we'd struggle to find any chicks big enough to ring. The remainder of the island was a mixed bag though, with some nests still with eggs, one just in the process of hatching. 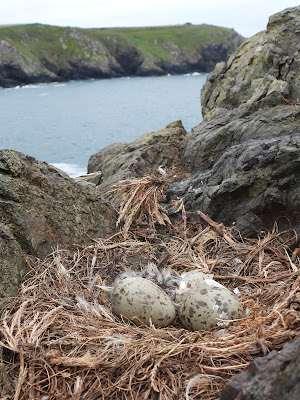 However, we did also find enough larger chicks to keep us occupied and in the end we colour-ringed 14 birds. This is still only 10% of the eggs/chicks we counted three weeks ago. but seems typical of recent years. We'll make a return trip in a couple of weeks time to see if the remaining chicks have survived, so the number may yet improve.

For the first time we also saw not one but two of our own ringed birds on the island, of an age now where they're probably breeding. It was good to see the rings on these birds were still looking good, as in some cases they can wear quite rapidly, making them hard to read. See below examples from Looe Island (taken two days ago) of worn rings from 2010 and 2011. 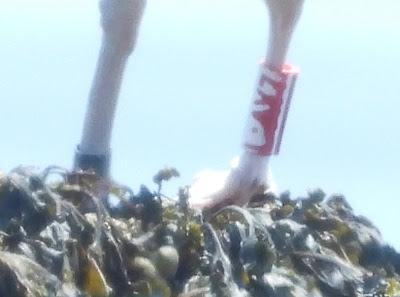 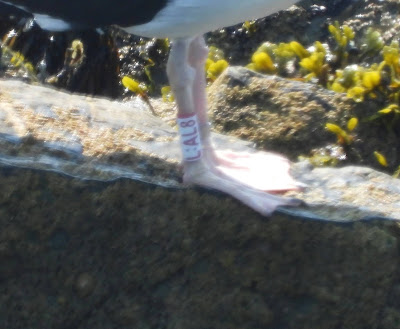 Strangely there were still also one or two Cormorant chicks in the nest which is very late, but most were long gone, leaving just their mallow-stick nests as evidence. 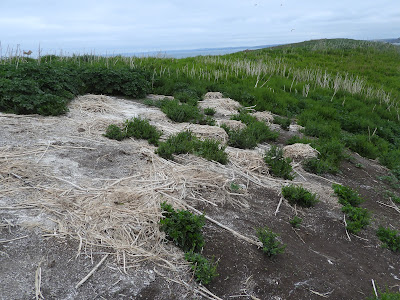 Posted by Mark Grantham at 15:55 No comments:

Following the recent arrival in one of our boxes of a Barn Owl from Manchester (details here), yesterday saw another visitor from up-country. Whilst visiting a regular nest site at Tregarne (St Keverne), a male bird flew out of the barn as we approached, but we managed to catch the female in the box, where she was sat with four downy chicks. Noticing she was ringed, we presumed it was the female we ringed there in 2017, but it was actually a female that had been ringed as a chick in 2017 at a site near Gweek (8km away). Oddly, this bird had bred elsewhere in 2018 and 2019 (near Crosslanes), 9km from where she was now nesting, so must have been a new arrival here.

As if this wasn't interesting enough, we then removed the bulk of an old Jackdaw nest in the box in the adjacent barn, finding the body of a long dead Barn Owl built into the nest. This bird was also ringed and remarkably was a chick from Devon ringed in 2019. When this bird arrived at Tregarne we won't know, but it must have been late winter or spring to be built into the Jackdaw nest, but there must have been some fight with two new females arriving at the same site to take it over!
Posted by Mark Grantham at 11:48 No comments:

We recently received details from the BTO of a nesting Barn Owl we recaught in on of our boxes at the end of May. We mostly catch our own birds, ringed as adults or chicks, but just occasionally we welcome a visitor to Cornwall. GR53474 is now breeding in a box near Fraddam, but had been ringed in 2017 as a chick at Irlam in Greater Manchester, over 420km to the north!

Since we've been monitoring Barn Owls in the county, the only other long-distance visitor we've recaugt was a bird ringed as a chick in Suffolk in 2017 that was breeding in Newbridge the next year (see here). Apart from that, a bird ringed as a chick in Cumbria in 1990 was found dead near Golant in its first winter and incredibly we have also had birds ringed in Germany an The Netherlands found here.

The same day the Irlam Barn Owl was caught we were also able to catch up with another visitor from the north (the second line on the map above). Red AXF was ringed as an adult on Puffin Island off Anglesey in summer 2016 but since then has found Cornwall to its liking, breeding ever since at Western Cove, Portreath. 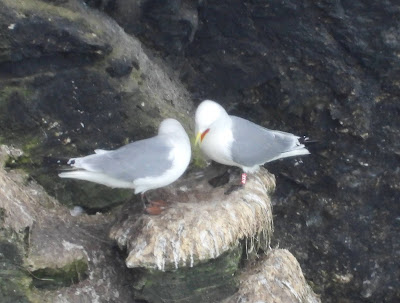 Posted by Mark Grantham at 09:37 No comments:

It's been a while now since we've updated the blog, but to be honest lockdown has meant that we've not really been up to much anyway! We've been out reading gull rings locally and that's about it. But now lockdown has eased slightly we've been able to get out and start to look at Barn Owls and some of our seabirds. More on the owls later, but it was great to get out to Trewavas Head and Mullion Island recently and see how our birds are getting on.

A quick kayak out past Trewavas Head last week found very healthy numbers of Kittiwakes back on the ledges, including lots of 'new' birds at Trequean which has only recently been used. This new site appears to have been taken on by younger birds, with several birds we've ringed as chicks now sat on the ledges there. A quick paddle found 23 of our colour-ringed birds and four French birds which is a great start.

We then had our first trip over to Mullion Island today to check on the numbers of Great Black-backed Gulls nesting there. We weren't able to get over to ring any Cormorants this year due to lockdown, which was unfortunate as they were in a very accessible part of the island! But we were able to photograph and count nests earlier in the year and the count of at least 53 (and probably 57) is the highest we've seen in recent years.


Back to the gulls, there was one section of the island we couldn't cover due to nesting Shags and Cormorants, but we covered a majority of the island and counted 59 nests, mostly still with eggs. This is slightly down on previous years, as was the 146 eggs/chicks counted.


We'll be back over in a few weeks to see how those 146 have got on, so more on that later. 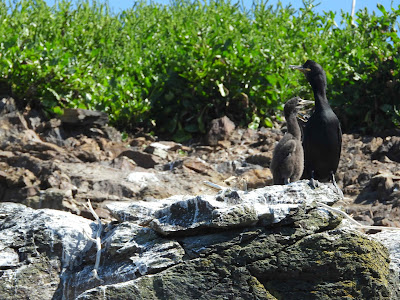 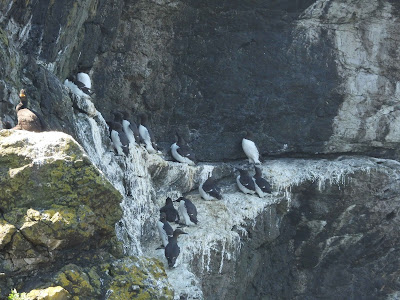 Posted by Mark Grantham at 14:25 No comments: