Yesterday we finally managed to get a few people together to start the process of getting some boardwalk into the CES net rides at Gunwalloe. These are sections that were replaced by South West Lake trust at College Reservoir, so we'd offered to 'remove them' for the trust. The down side being that these 4m sections are pretty heavy and cumbersome and required a few strong arms and a trolley for the day. 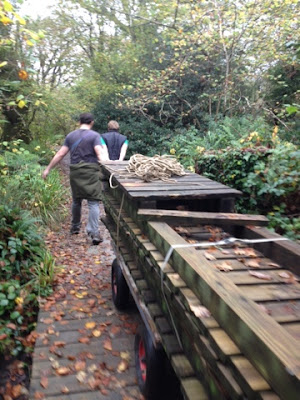 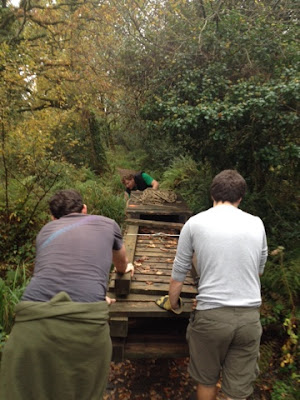 But finally we managed to get a total of 13 long sections and three short sections out to the road, so part two of the plan will be to borrow a low-loader to get them down to Gunwalloe and then out into the reedbed. Hopefully by next CES season we won't be wading around up to our thighs in thick mud... 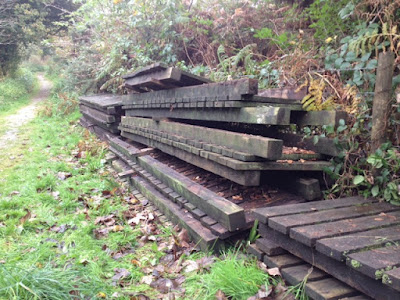 Posted by Mark Grantham at 09:41 No comments:

A catch up with some colour-ringed regulars

With the weather once again too windy for mist-netting, it was a good time to get out and catch up with a few old colour-ringed friends. One of the most interesting birds is 23D8, which we've blogged about several times before (here and here)! It had been seen yet again coming through the Camel estuary earlier in the autumn, but we hadn't managed to see it yet at Helston Boating Lake. But all in good time, it reappeared this week (22nd), back on its usual rail. 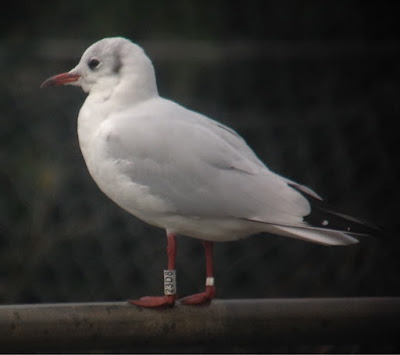 It was then on to Men-aver beach, where there's always a good selection of Med Gulls to look through. But with neap tides refusing to drop, there were only 40 birds here. Three of these had just metal rings, and only one colour-ringed bird. Red PLP2 is a Polish-ringed bird, ringed as a chick in June 2012, and has been seen in March 2013 and March 2014 at Pett Level, Sussex, and later at Ferrybridge, Dorset, in January 2015. This is the first time it's been reported from Cornwall though, so it'll be interesting to see if it stays. 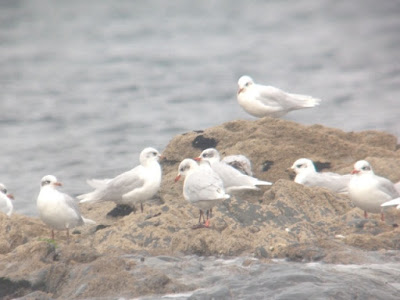 Last but not least, a brief high-tide stop at Devoran produced one of our regular Curlews, again one we've blogged about before (here). 'SA was ringed in The Netherlands in June 2013 and is a regular wintering bird on the estuary.

So if we get the chance, get out and look for some colour-ringed birds of your won, as their histories can get rather addictive!
Posted by Mark Grantham at 12:54 No comments:

The last five days have seen daily ringing at Nanjizal, with 493 birds ringed, including 171 Blackcap, 74 Chiffchaff, 22 Firecrest (60 ringed so far this autumn), three more Yellow-browed Warblers (15 so far this month!) and a Little Bunting (one of two present). Also of note were late Reed Warbler, Garden Warbler and the six Siskin (unusual for the site).

Away from the Penwith valley, the rest of us headed out to Predannack (National Trust farm near Mullion) this morning to try for our first Skylarks of the winter. The fields were pretty quiet, so it's perhaps a bit early in the season, and pre-dawn drag-netting saw three birds slip under the net. We were slightly more successful mist-netting, though nine nets did still only produce four birds!


While we were there we took the opportunity to turn the 'Skylark H' into a 'mipit triangle', but the presence of various raptors kept the majority of birds away from the nets. Some hedgerow nets did catch a single Linnet, in amongst a plethora of Dunnocks...

This bird was an interesting aside though, as it had hints of pinky-colour coming through on the breast (suggesting a male), but an incredibly dull, grey head. So we might presume that this was a winter-plumage male, but the moulting wing, and in particular the worn state of the unmoulted inner secondaries (and very dull head), suggested this was an adult part-way through moult. So quite why an adult male Linnet would look quite so shabby is a mystery, but we presume this is a second-year bird, having had a dull first-summer plumage and, so far, a delayed moult of its head feathers. 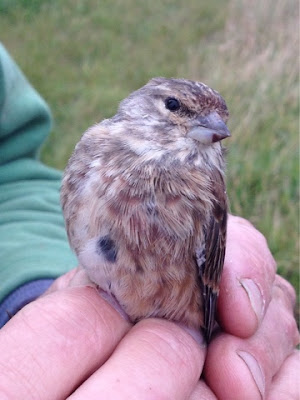 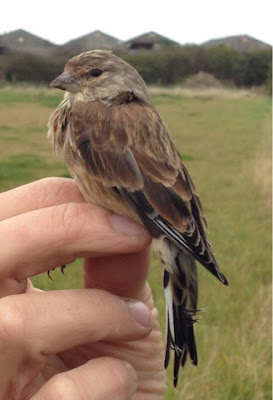 Posted by Mark Grantham at 16:42 No comments:

With Yellow-browed Warblers seemingly flooding into the north and east of the country, it was only a matter of time before they made it down to Cornwall in numbers. The last week has seen Yellow-broweds in seemingly every valley and Nanjizal has been no exception. This morning's catch of seven was rather notable though, especially as it included a bird that was already ringed, and not by the group.

HPY702 had actually been ringed just seven days previously at Gibraltar Point Bird Observatory in Lincolnshire (over 530km distant). That day there were five ringed at the bird observatory (with an obs record count of 11 in the recording area!). Interestingly, this bird weighed 5.5g when first ringed and a week later it had actually increased in weight to 6.1g.
Posted by Mark Grantham at 00:32 No comments:

More Mipits on the marsh

With the forecast suggesting no wind today, we took the opportunity to get the triangle out and catch some more Meadow Pipits at Gunwalloe. Unfortunately it wasn't quite as calm as predicted, but we still managed a respectable 61 pipits, along with a scattering of other species.

Highlight for some was a rather fine adult Moorhen, sexed as a female on biometrics. 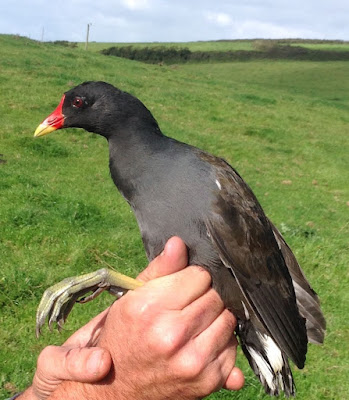 Posted by Mark Grantham at 16:20 No comments: