Although not strictly a West Cornwall Ringing Group bird, Great Black-backed Gull L:AU8 has been seen on our patch a couple of times...

It was ringed as a chick on St George's Island, Looe, in 2011 and was first seen on Hayle estuary in October 2011. It wasn't reported again until 24th September when it was on Skokholm Island, Pembrokeshire, and then the shockingly bad iPhone-scoped photo below (mine...) came from Copperhouse Creek, Hayle, just 26 days later (10th October).

Presumably this bird won't breed for another couple of years and will continue to wander, so where will it turn up next? Hayle is a great place to look for colour-ringed gulls and if you're lucky enough to find one then details of project coordinators can be found on the cr-birding website.
Posted by Mark Grantham at 10:35 No comments:

We've been a bit late submitting our nest recording data for this year, but having finally sorted all the final outcome codes and monthly effort recording, I finally sent it all off to BTO this afternoon (see more on the BTO Nest Record Scheme here). The total of  144 nest records was pretty good, although admittedly a fair few of these were single-visit seabird records...

Also doing badly were Great Black-backed Gulls. On our first visit to Mullion Island we counted well over 100 chicks and eggs, but later visits (theoretically to colour-ring chicks) found only a handful of survivors, with perhaps as few as three or four birds fledging! What happened to the others is a worrying mystery.

Conspicuous by its absence from the top five this year is Kittiwake. The Rinsey colony failed completely, with just six active nests all failing at the egg stage, which compares badly to the 44 active nests in 2012 (36% of which failed).

The full list of nest records submitted is below:

Black 27M is a French first

A good stormy Cornish day meant that the only thing to do (other than work!) was chase a few colour-ringed gulls. Having been evaded by a French-ringed Med Gull at Men-Aver beach last week I thought I'd have another look this afternoon. Just after low tide on a good day, up to 60 Med Gulls congregate on the 'reef' here, but today wasn't a good day, with a paltry three present, none of which were colour-ringed. 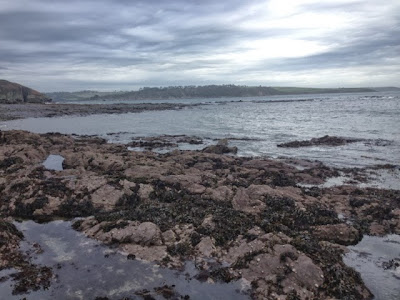 But the larid redeemed themselves with a Great Black-backed Gull sporting an unfamiliar black colour ring. OK, so you can't see its legs in this dodgy iPhone-scoped photo, so you'll have to believe me that it was 27M, a bird ringed as a chick in Normandy in 2013. We don't get many foreign-ringed Geebs in Cornwall, with records of just six; four from the Channel Islands and two from Norway, so this French bird is a bit of a first. 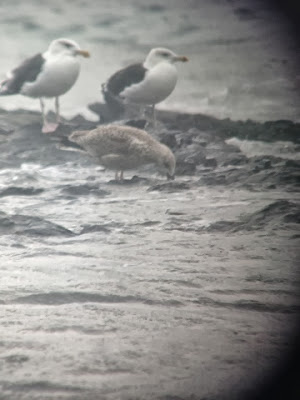 Posted by Mark Grantham at 18:18 No comments:

Finch frenzy and a moult muddle

The last few days has seen a continued influx of autumn migrants into The Lizard and a couple of calm mornings has allowed us to capitalise on this. In my relatively small garden (below, with the school playing field behind), with just one 30' net, we've been busy catching Goldfinches coming to nyger seed and have caught over 140 in the last two days. Add to this a few Greenfinch, Starling, Chaffinch and single Siskin and Pied Wagtail and it's been busy! 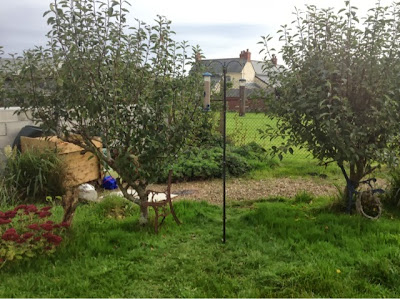 Most of the Goldfinches have been young birds (and oddly more females than males), distinctive with their pointed tails, juvenile primary coverts and unmoulted greater coverts (although most had moulted them all). A surprising number were still in their first juvenile plumage as well, which seems a bit late. Most of the (presumed) adults caught were just finishing primary moult, with just two already done. There were then the odd one or two birds where ageing wasn't quite so simple.

The bird below was just finishing primary moult, with just the outer two primaries (including the vestigial outer one) to go. But is the unmoulted primary here really old enough? If this was a moulting adult, then this primary would have been grown as part of the bird's main moult a year ago. The other option is that this is a juvenile bird (from an early brood perhaps) undergoing a complete moult, in which case this primary would have been grown in the nest a few months ago. 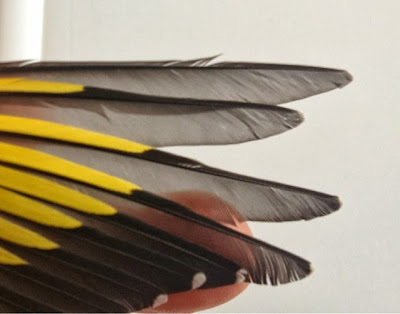 So how can we decide on the age of this feather? Comparing it to known juveniles is one option... The bird below is a known juvenile, with a 'good' tail and dull primary coverts, and appears to show primaries with a similar amount of wear to our mystery bird. 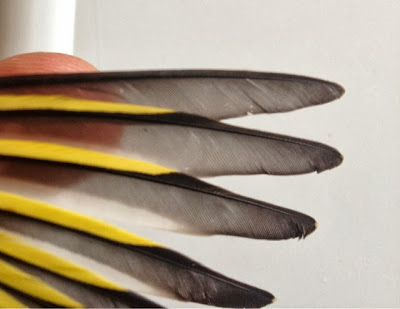 Another juvenile (below) shows even browner primaries though, despite the poor quality photograph - iPhones don't do macro! So if our mystery bird has a fresher unmoulted primary than this juvenile, then it too must be a juvenile right?

Note as well on this juvenile has also moulted some primaries, but not all of them. The outer three (ignoring the vestigial outer feather) appear rather brown with worn tips, whereas the inner feathers are much fresher, darker-centred, with brighter yellow outer webs and with more obvious unworn white tips. 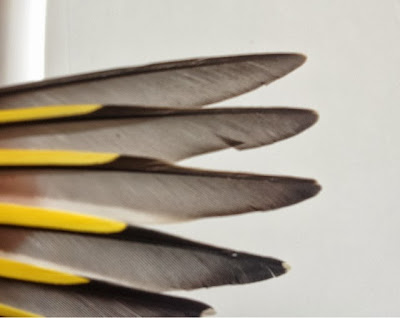 To be sure we'd really need to compare to a known adult in active moult and see how worn the unmoulted outer primaries really are at this time of year. But this does indeed look like a juvenile undergoing a complete moult, which means that it's rather unsafe to assume that other birds finishing primary moult are adults...

It's that time of year when as soon as there's a favourable light wind the Mipits are on the move...

This last weekend was the first settled period for a while on The Lizard and autumn vis-mig started to pick up. The first Reed Buntings of the winter were around the fields and the first real Skylark movement got underway, but it was Meadow Pipits we were interested in. We're lucky enough to be able to ring on a wild bird seed field down near Southerly Point, where we can also target Meadow Pipits in a triangle of nets. The theory is, set the nets in a tight triangle, put a tape lure (or more accurately an MP3 lure!) in the middle and wait for birds to drop in. 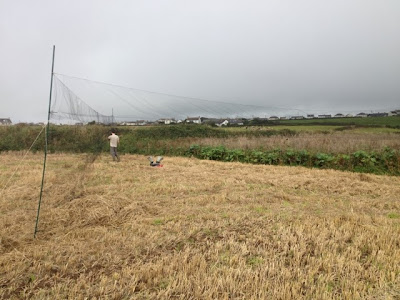 As Saturday went on, migration picked up and hundreds of Meadow Pipits were heading south, many dropping in to the triangle. Through the morning, two of us ringed 149 Meadow Pipits and some extra two-shelf nets through the weedy field also produced a few Linnet, Goldfinch, two Stonechat and a late Whitethroat.


The next day saw similar weather, so we repeated Saturday's efforts and ringed a further 114 Meadow Pipits and a more impressive 30 Linnet. In fact, our weekend total of 43 Linnet is the most ringed in the county in any year since 1985! Almost mirroring Saturday's catch, we also ringed two more Stonechat and a late Sedge Warbler.


Just to round of the weekend, this morning saw a change of scenery, with the team moving up to Gunwalloe for yet more pipits. This wasn't quite as successful as The Lizard, but it gave us the excuse for some late autumn reedbed ringing, producing a few Reed Buntings, a late Reed Warbler and a Cetti's Warbler. 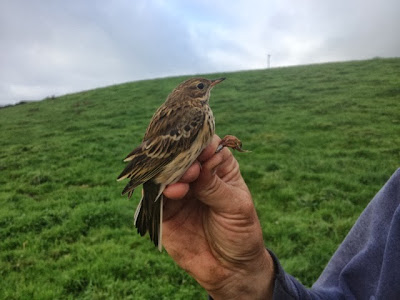 All in all, the long weekend ringing totals were 449 birds ringed, including 349 Meadow Pipit, 43 Linnet and 21 Dunnock!

Posted by Mark Grantham at 17:31 No comments: