Although not strictly a West Cornwall Ringing Group bird, Great Black-backed Gull L:AU8 has been seen on our patch a couple of times...

It was ringed as a chick on St George's Island, Looe, in 2011 and was first seen on Hayle estuary in October 2011. It wasn't reported again until 24th September when it was on Skokholm Island, Pembrokeshire, and then the shockingly bad iPhone-scoped photo below (mine...) came from Copperhouse Creek, Hayle, just 26 days later (10th October). 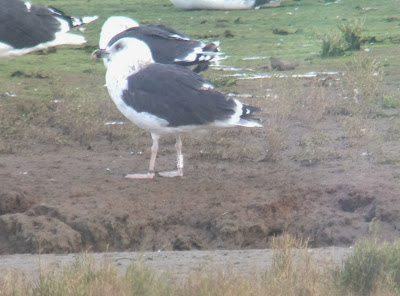 Presumably this bird won't breed for another couple of years and will continue to wander, so where will it turn up next? Hayle is a great place to look for colour-ringed gulls and if you're lucky enough to find one then details of project coordinators can be found on the cr-birding website.
Posted by Mark Grantham at 10:35