It's been a while since we blogged, but it doesn't mean we've not been busy. We're now at a stage where there are only two Barn Owl broods left to be ringed (with the running total now over 95 birds ringed this season), so will be looking at the numbers soon. It feels like the season started well, with plenty of large clutches, but has since gone downhill, with much smaller broods and a few failed sites. One site even had four large chicks where two attempted to fledge early and sadly ended up predated.

Away from Barn Owls, our other main summer ringing once again focused on seabirds, with mixed fortunes. Our annual gull-ringing trip to Mullion Island was a quick affair, with the island seemingly devoid of gulls. In fact, we only found and ringed five chicks, which is the lowest number since 2013.

Slightly more successful were our Kittiwake trips to Trewavas Head, where we have continued to read colour rings on many of our own birds (43 from previous years) and also several French birds, some of which are now breeding here. We've also strayed further north to check the colonies Portreath and Porthmissen, the later being so much quieter than in previous years. From the precarious viewpoint at Porthmissen Bridge it's possible to see most of the ledges, but the photos below show large areas of the colony have failed completely, with around 60 nests still with chicks. 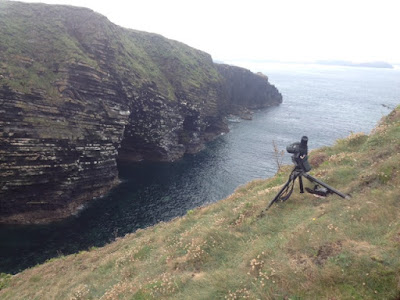 If reading colour rings takes patience then reading metal rings is a whole different ball game! But two rings read in the last week were both worth the effort, even more so as they were both on upside down! A Cormorant at Helston Boating Lake was ringed as a chick on Little Saltee Island, Co Wexford, in 2016, and a Black-headed Gull at Swanpool, Falmouth (below) was ringed as an adult in Dorset in 2011. 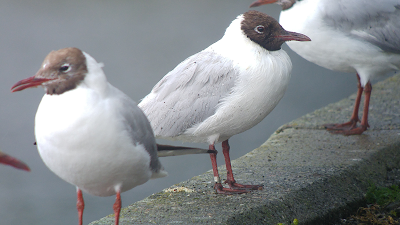 Posted by Mark Grantham at 21:48 No comments: