The last few days have seen increasing numbers of gulls following fishing boats into Coverack harbour. Whilst the highlight for many are the four (or more) Glaucous Gulls there, members of the ringing group have been focusing more on reading colour rings.


Over the last few days, we've managed to read rings on 18 different birds, including birds from France, Guernsey (4), Skokholm, Denny Island in the Bristol Channel, Portland, Looe Island (5) and Falmouth (5).

Just to keep everyone happy, here's a couple of photos of Glaucous Gulls, showing a very bleached bird and a very fresh one. 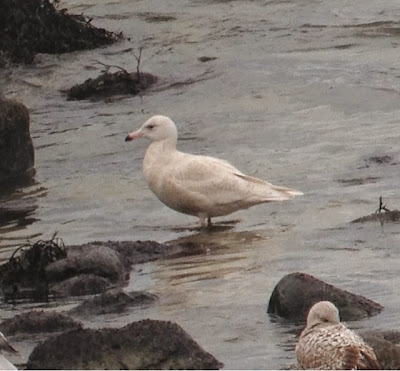 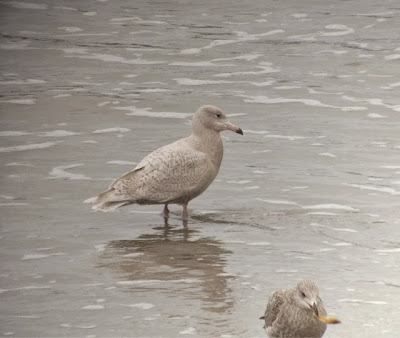 Posted by Mark Grantham at 09:22 No comments:

St Ives gulls on the BBC

We've blogged a bit about some of the gull work we've been involved with in St Ives (here, here and here), but the BBC show that funded this was eventually broadcast earlier this evening on BBC1. If you're quick you can catch it on iPlayer for the next few days (available here). 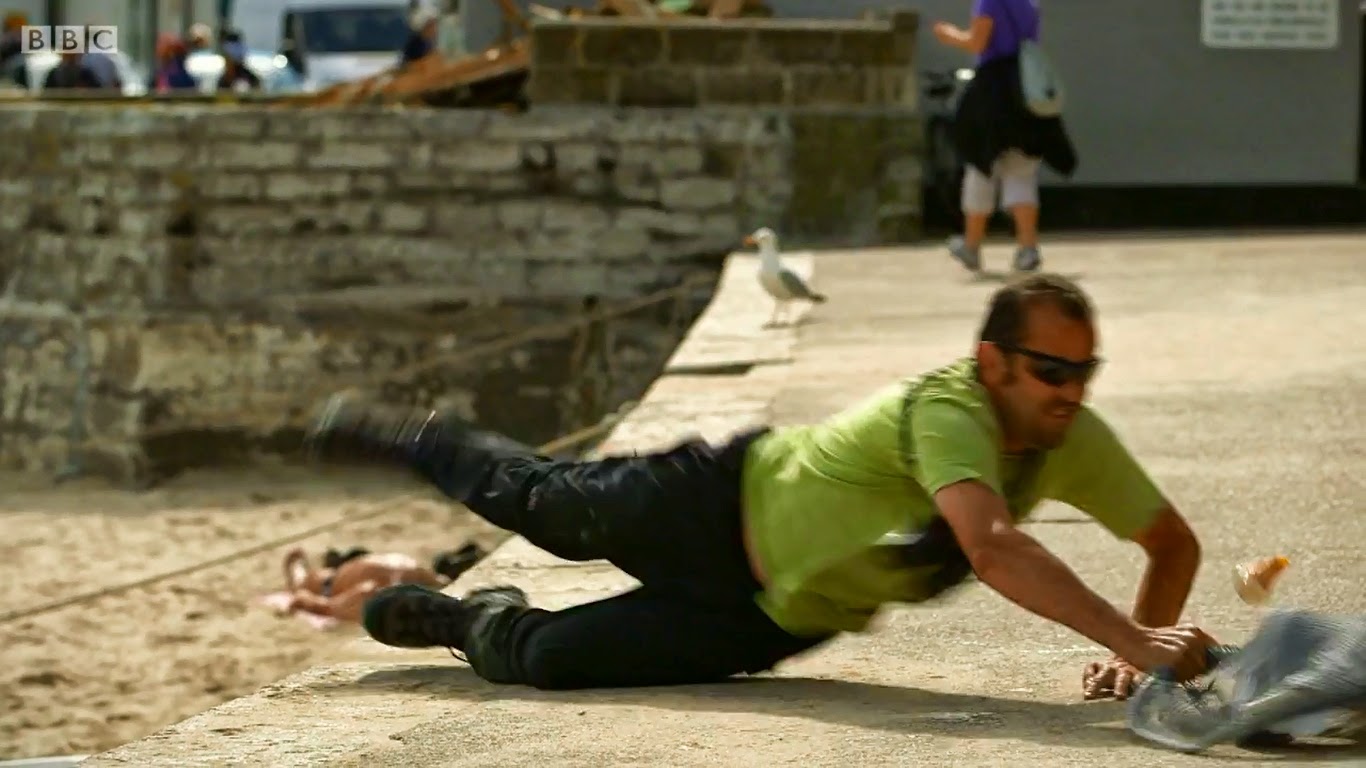 The programme is worth a watch, but for those pressed for time, the amusing bits to look out for are us catching a few birds from 14:40 and a hint at some of the GPS logger results from 32:20, although they gloss over the fact that since the summer we've accumulated over 35 million data points from these birds!
Posted by Mark Grantham at 21:15 2 comments:

With a carload of the group out of county cannon-netting ducks and waders with the Axe Estuary Ringing Group, I was on my own at Gwennap sewage works today. With just two nets, a couple of hours produced a very respectable 41 birds, including 29 Chiffchaffs!

The highlight was the bird below, which I thought was a British control (AAH203 - actually a Wren ringed in Cumbria in 2003) until I noticed the ring address which read 'ARNHEM HOLLAND'. Dutch-ringed Chiffchaffs aren't very regular in the UK, with fewer than 30 previous records. This isn't the first to be found in Cornwall though, as one was retrapped at Brew, near Sennen, in May 2007. Oddly this bird had been ringed just nine days previosuly in The Netherlands, so a very odd movement! 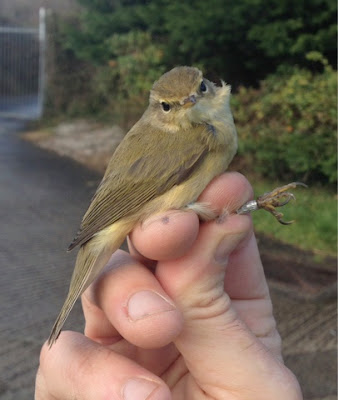 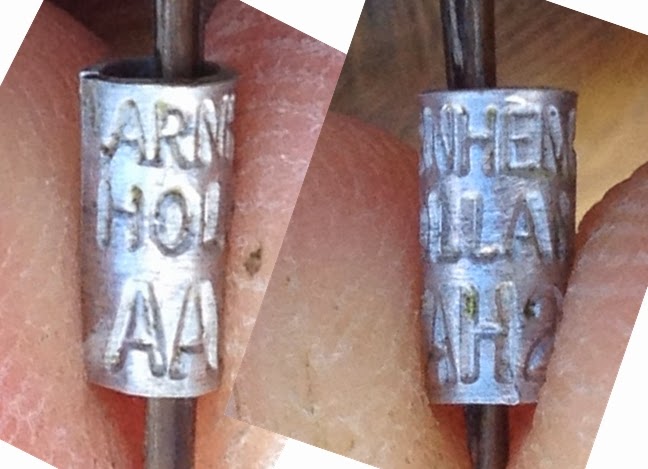 Another interesting bird was this Siberian Chiffchaff. Not the classic bird, lacking all olive and yellow tones, but a more subtle type. But it still showed very washed out plumage tones, along with a slightly flaring supercilium behind the eye and jet black legs. 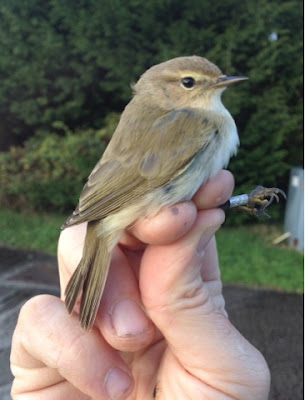 The 'bycatch' of the day wasn't too shabby either, including one of two Yellow-browed Warblers and one of three Firecrest present at the site. 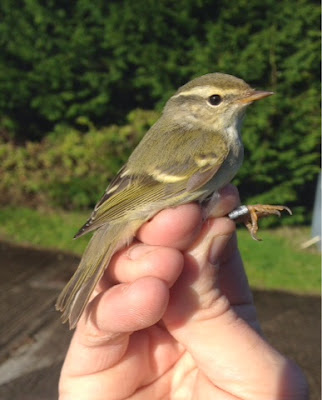 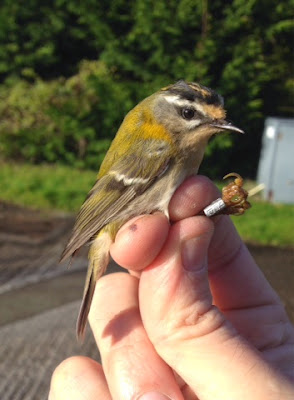 Posted by Mark Grantham at 16:36 No comments:

We've recently been able to look at some of the data from the GPS data-loggers on the three gulls in St Ives and one of these in particular is quite interesting. Logger 4036 (colour ring Blue W:181) was a breeding male originally ringed on the roof of the Co-op in St Ives. Over November-December 2014 it took a couple of trips out to the north, visiting Lundy Island for an overnight stop on one date. A second trip then took it out to both Great and Little Saltee Islands, a brief visit to some fields near Duncormick (as far as 240km from St Ives) and then a visit to Hook Head. 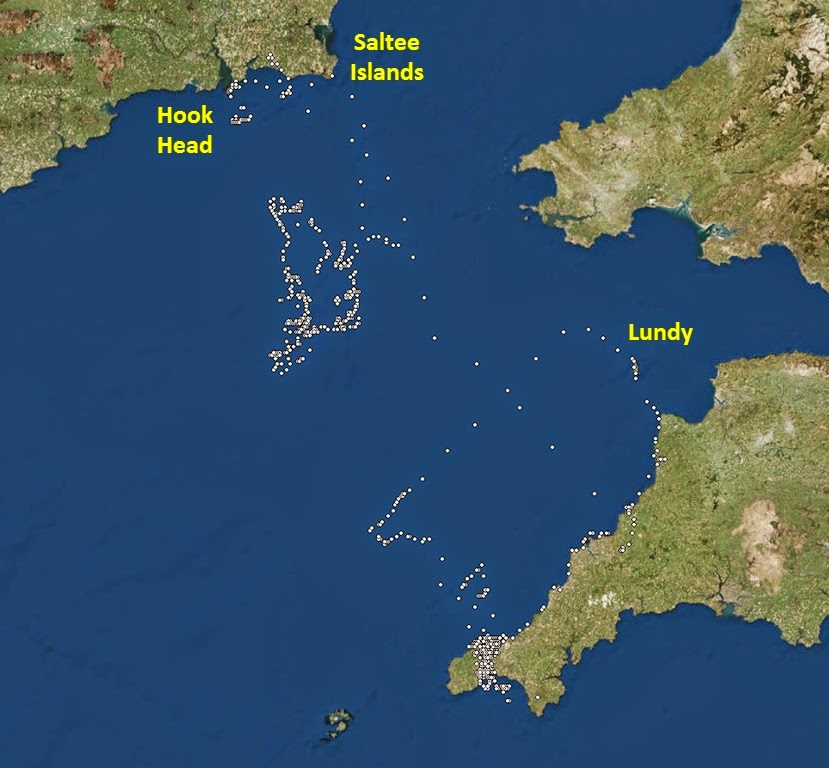 What is also interesting is the time it spent at sea on its return, with a cluster of points in the Celtic Sea. It is possible that it was either following fishing boats feeding or a resting bird 'riding the tide'.

W:181 has always been a very pelagic bird, and the track below (in yellow) shows some of its movements during the breeding season, again wandering out into the Celtic Sea. 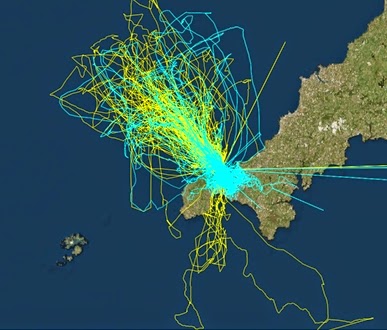 Many thanks to Peter Rock for getting to grips with the data and producing the maps here.
Posted by Mark Grantham at 11:18 No comments:

The year seems to have started as it ended, with some pretty windy weather forecast... So looks like we won't be netting any time soon, but that doesn't stop us getting out and reading some rings. Photographer Tony Mills did incredibly well to get enough detail on a Chiffchaff ring at Sandy Cove, Newlyn, to get the whole number: HHB515. This was a bird ringed at Nanjizal, Land's End, on 20th November, so whilst only 11km away (as the Chiff flies), it's interesting to see how these birds move around during the winter. 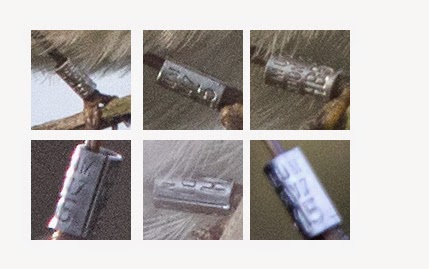 More standard fare came from Men-aver beach on the Helford, with a good gathering of gulls producing three colour-ringed birds. These were two Mediterranean Gulls we've seen before this winter (Green RS92 from France and White 3P71 from Denmark) and one of our own Great Black-backed Gulls from Falmouth. L:BF6 was ringed as a chick on the roof of the Falmouth Marine School in 2013 and this is the first time we've seen it since. This is the second of the three siblings to be seen, following a bird in France in October.
Posted by Mark Grantham at 17:46 No comments: