White-fronted Goose isn't the commonest bird in Cornwall, so Alan James was happy enough to find and photograph one on 1st November at Marazion Marsh. This was no ordinary bird though as it was carrying an orange neck collar and also a data logger. 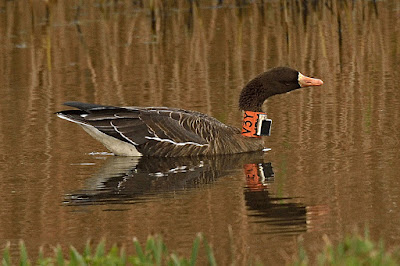 Having spotted this we quickly emailed Tony Fox who was almost certainly responsible in some way for this bird. Thanks to Tony for the very quick response, which is summarised here.

Orange V3Y was a Greenland White-fronted Goose ringed at a place called Hvanneyri in west Iceland on 23rd September 2017 and was fitted with a GPS logging device and solar cell. Whilst at Hvanneyri it associated with CDZ (a juvenile male), another adult female fitted with a GPS logger and an unringed adult (probably male) that evaded capture. This small social group moved to a farm called Leirulækjarsel in Mýrar on 25th September where they remained until they departed.

The team don't have online access to live tracking data from V3Y, but the other GPS-tagged bird left Leirulækjarsel at around midday on 28th October en route to its wintering grounds in southern Ireland. What happened next is pretty amazing, because it made southern Ireland safely on its way south no problems, passing over Co Waterford at 4:30am on 29th October but seemed to not realise it was so close to Wexford! It continued southwards for some reason, eventually doing a tour of the Channel Islands and Brest in Brittany before turning back north, reaching Tacumshin in Co Wexford at 5:30am on 30th October. It rested only briefly before continuing north to Wexford Slobs, arriving at 7:20am the same day.

Without its own tracking data, the best guess is that V3Y followed a similar route for the majority of the journey, but got separated from the flock before turning up at Marazion Marsh on 1st November. But the story does have a happy ending, as John Wilson (who started the tracking project of Greenland White-fronted Geese back in 1983, resighted the whole social group (CDZ, V3Y, the GPS-logged bird and the unringed adult) at Wexford North Slob on 8th November. So despite an impromptu stop-off in Cornwall, V3Y found her way home eventually and rejoined her family!

**UPDATE** Thanks to Reuben Veal for adding to the story, as the bird he reported from St Gothian Sands on 5th November was V3Y, adding extra detail to this fascinating story!

Many thanks to Alan for allowing us to use his photo and to Tony for the rapid reply and very comprehensive history of this social group.
Posted by Mark Grantham at 17:11 2 comments: