It's not often we get the chance to read colour-rings on Peregrines outside of the breeding season, as birds are often hard to pin down to a single location to read the ring. But with a few local photographers becoming more aware of the various colour-ringing projects we run, the chances of reading rings on fly-by birds is increasing.

But it was a member of the ringing group who photographed a passing Peregrine near Predannack Airfield yesterday, only to find it was wearing a yellow colour-ring.

The group has been using yellow colour rings on Peregrines for several years now, so we presumed it was a local bird, but it was a surprise to find it was actually ringed as a chick in north Cornwall in 2016. We've had a few long-distance movements before of our own birds, but it's always nice to have a surprise like this. Thanks to Tony Blunden for the photo and Tony John for confirming the details for the bird.
Posted by Mark Grantham at 14:08 No comments:

Email ThisBlogThis!Share to TwitterShare to FacebookShare to Pinterest
Labels: peregrine

In the first mist-netting venture of the year, it only seemed right to head to the sewage works. So just two of us braved the early morning frost to get a few nets up at Gwennap Sewage Works. It took a while for the sun to stir up the insects enough to get birds moving, but once they did (and with the addition of a 'sewage mix' on the MP3) we didn't do too bad, ending up with 62 birds.

The total included 23 Chiffchaffs, two of which were Siberian 'tristis' Chiffchaffs. Interestingly, one of these was already carrying a ring, having been ringed at Gwennap in December 2016. This is only the second time we've recaught a tristis in a subsequent winter, adding to the evidence that these are returning wintering birds, not lost vagrants.

Of just as much interest was the recapture of the bird below, originally ringed in September 2016 in North Norfolk! This was presumably a recent autumn arrival in Norfolk when ringed, so was presumably from points north/east. 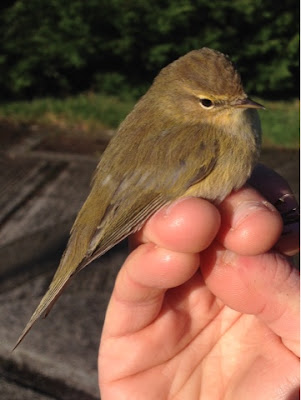 Just to round off the day nicely, and very typical of this autumn/winter, we ringed an impressive NINE Firecrest, which is a good winter total, never mind from one morning.
Posted by Mark Grantham at 00:19 No comments: