Yesterday we had a ringing group jolly to help out Kester Wilson down at Nanjizal, near Lands End. Numbers of birds in the valley there have been picking up and just last week a ringing day total of almost 300 birds spurred us on! The site is a great mix of habitats and attracts good numbers of some quite uncommon birds. After narrowly missing a soaking, the first net round wasn't quite as hectic as expected, or hoped for, but still kept us busy for a bit. 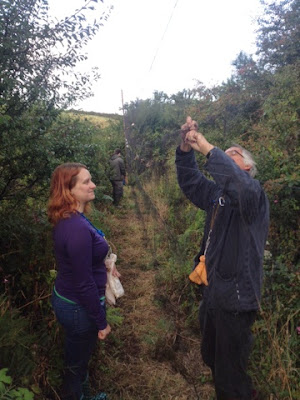 It was only really the first two net rounds that caught big numbers and we were soon closing nets as it warmed up and slacked off. But a quick add up and we'd ringed a non-too-shabby 125 birds, including 10 Grasshopper Warblers, 35 Sedge Warblers and 31 Whitethroat, and just the one Tree Pipit.

Posted by Mark Grantham at 22:35 No comments:

Hot on the heels of TBB, which was recently seen in West Bexington, Dorset, another of our Cormorants has headed east. TAX was at Dawlish Warren, Devon, on 15th August, reported to use by Lee Collins, who reads a huge number of rings at the site. This was his first colour-ringed Cormorant though, so we're happy to oblige!

TAX was ringed in May 2014 on Mullion Island, one of 18 birds now sporting orange colour rings.

Posted by Mark Grantham at 14:23 No comments:

Returning Curlews from the Continent

We've had a little run of colour-ringed Curlew sightings recently, with three different birdsringed in three different countries. Two of these are in fact returning birds, proving that there's some degree of faithfulness to wintering sites of European birds.

Red/Metal, Red/Green was ringed as a breeding male on 30th May 2013 in Kattenvenne, Germany, and was first seen at Rosemullion on 10th August 2013. It then returned to breed at Kattenvenne in 2014 and was back at Men-aver beach, Helford River, on 13th August 2014.

The other bird was a new one to us, but we do know that it was a bird ringed as part of a BTO project looking at how waders use the Severn Estuary. This will have been a bird ringed in autumn/winter so may have been on passage when ringed, or has now switched wintering area.

We blogged recently about a few big gulls at Lizard Point, including a pic (also below) of Great Black-back T:013. 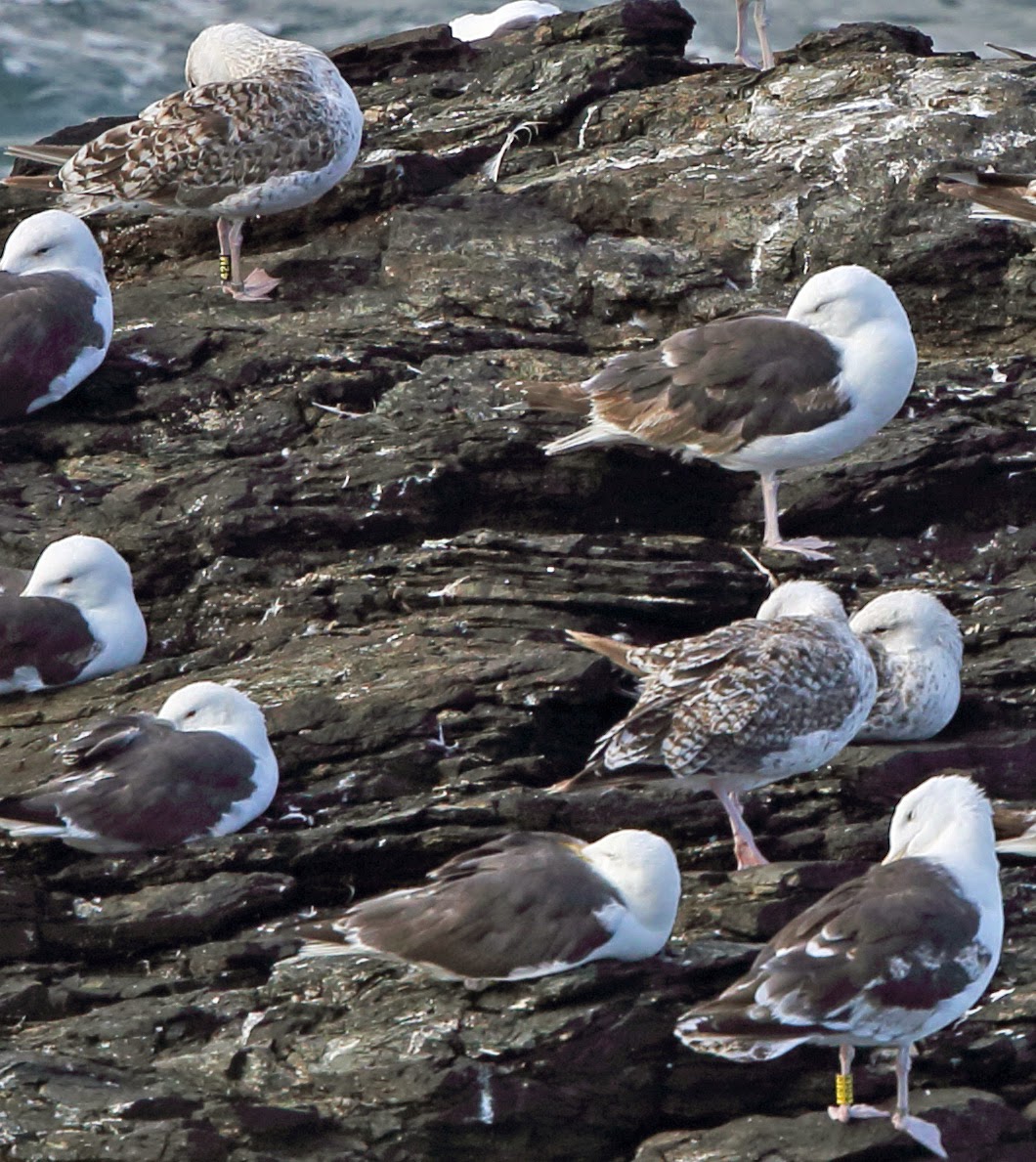 We've now received the details back for this bird and it has quite an interesting history. The whole story behind it's ringing featured on the BTO's Demog Blog last year just after it had been resighted in Spain. It was seen in A Coruña from 13th January to 26th February 2013 and then again from 15th October to 29th November 2013, but hadn't been seen since. It is presumably still too young to be breeding so is just perhaps summering closer to home...


The photos originally appeared on Demog Blog and are courtesy of Euan Ferguson and Antonio Gutierrez.
Posted by Mark Grantham at 11:01 No comments:

Juvenile Med Gulls on the Helford

Surprise surprise it's too windy for any mist-netting this week, so it's back to looking at colour-ringed gulls again...

Just for variety I ventured out to Men-aver beach on the southern side of the Helford River. The reef here is a great gathering point for Mediterranean Gulls from the area and as the tide pushes them up the beach it's possible to read a few rings. There have been good numbers of very fresh juveniles around recently, so I thought it'd be nice to try to find a ringed one amongst them to see where they're from so early in the season.


Tides were rather higher than expected (ex-hurricane effect perhaps?), so there were only 15 birds on the reef, but three of these were wearing smart green colour rings, indicating a French origin. Two of these were fresh juveniles as well, exactly as I wanted...

Thanks to the ever-efficient Camille Duponcheel, I got the details for these birds back this morning. Both 570 and RR83 had been ringed on the same day (29th June) at the same site: Barbâtre, Polder de Sebastopol, Vendée. This is over 400km from Cornwall and interesting that these birds had moved north so soon after fledging. 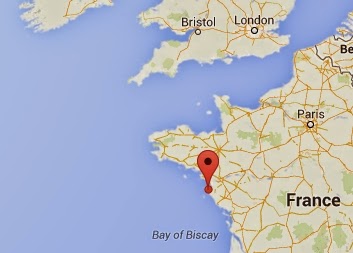 Posted by Mark Grantham at 09:57 No comments:

The weather has been kind the last few days, and the forecast is looking good for the next few days, so we've been busy taking advantage to get mist nets up. A quick couple of mornings last week at Marazion caught over 120 birds, including this very smart Cuckoo. 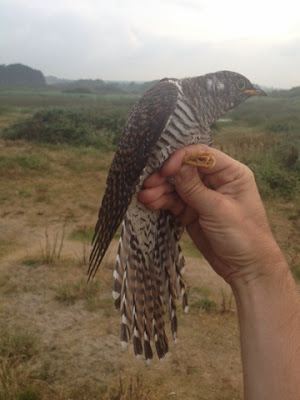 In preparation for our latest CES visit this morning, we put up nets last night and managed to catch 25 Swallows in the process. There's always one rusty bird in these catches that makes a change, but I don't think I've seen one quite this dusky before.


The actual CES itself this morning was half-decent for a change. The average catch on Visit 10 is just 35 birds, so our total of 57 this morning was very respectable. Unsurprisingly most were Reed and Sedge Warblers, although 11 Blue Tits were a bit unwelcome! One more unusual bird was a very dark-headed Reed Bunting. Despite having a rather black head, it didn't have any real white collar, and the presence of an obvious brood patch confirmed this was a female. It was actually a retrap, first ringed as a juvenile in July last year. Whilst you do sometimes see female birds taking on male characteristics the older they get (female Blackbirds turning black for example), this bird was probably just very worn, with the dark feather bases showing through on the head. 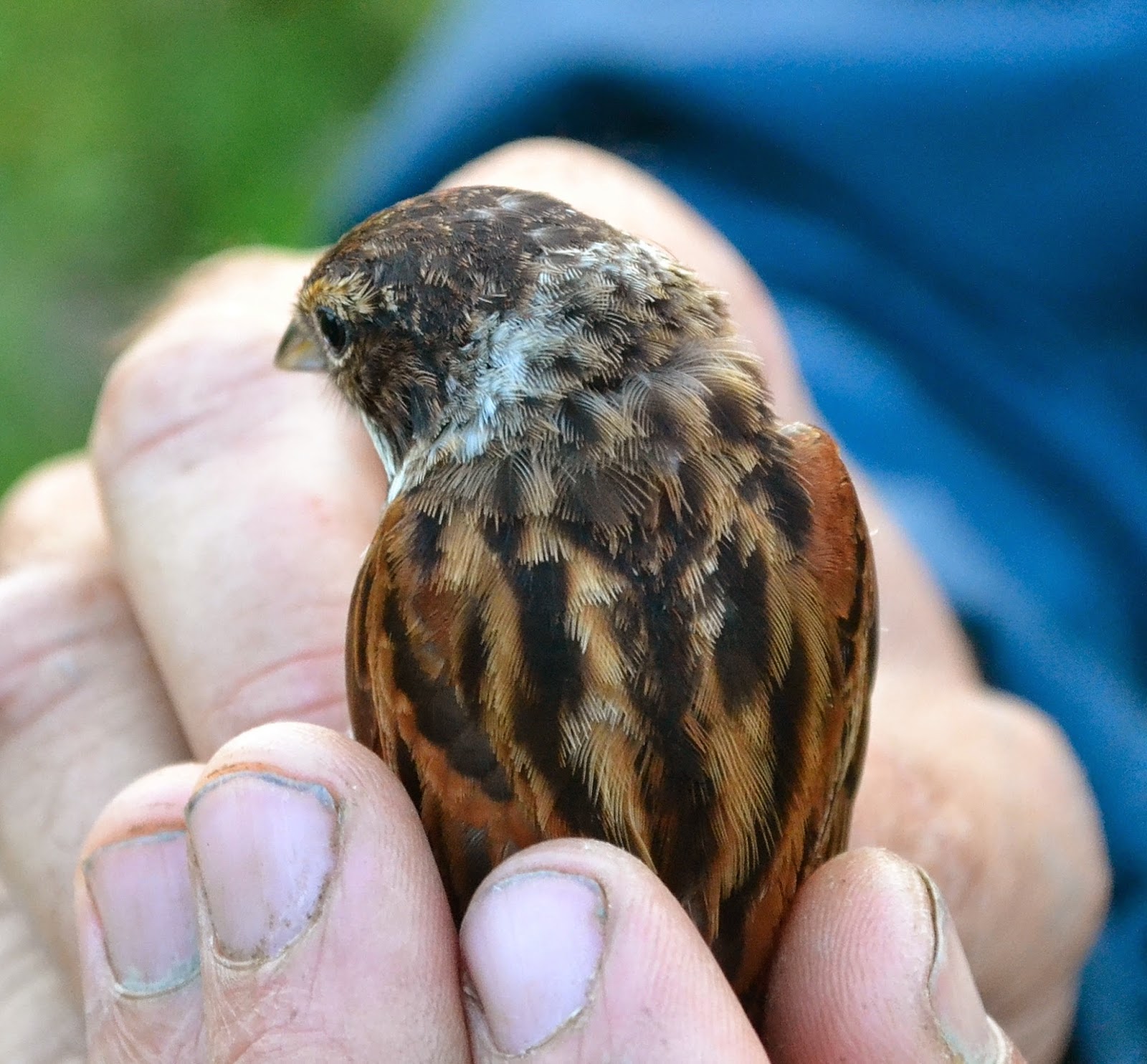 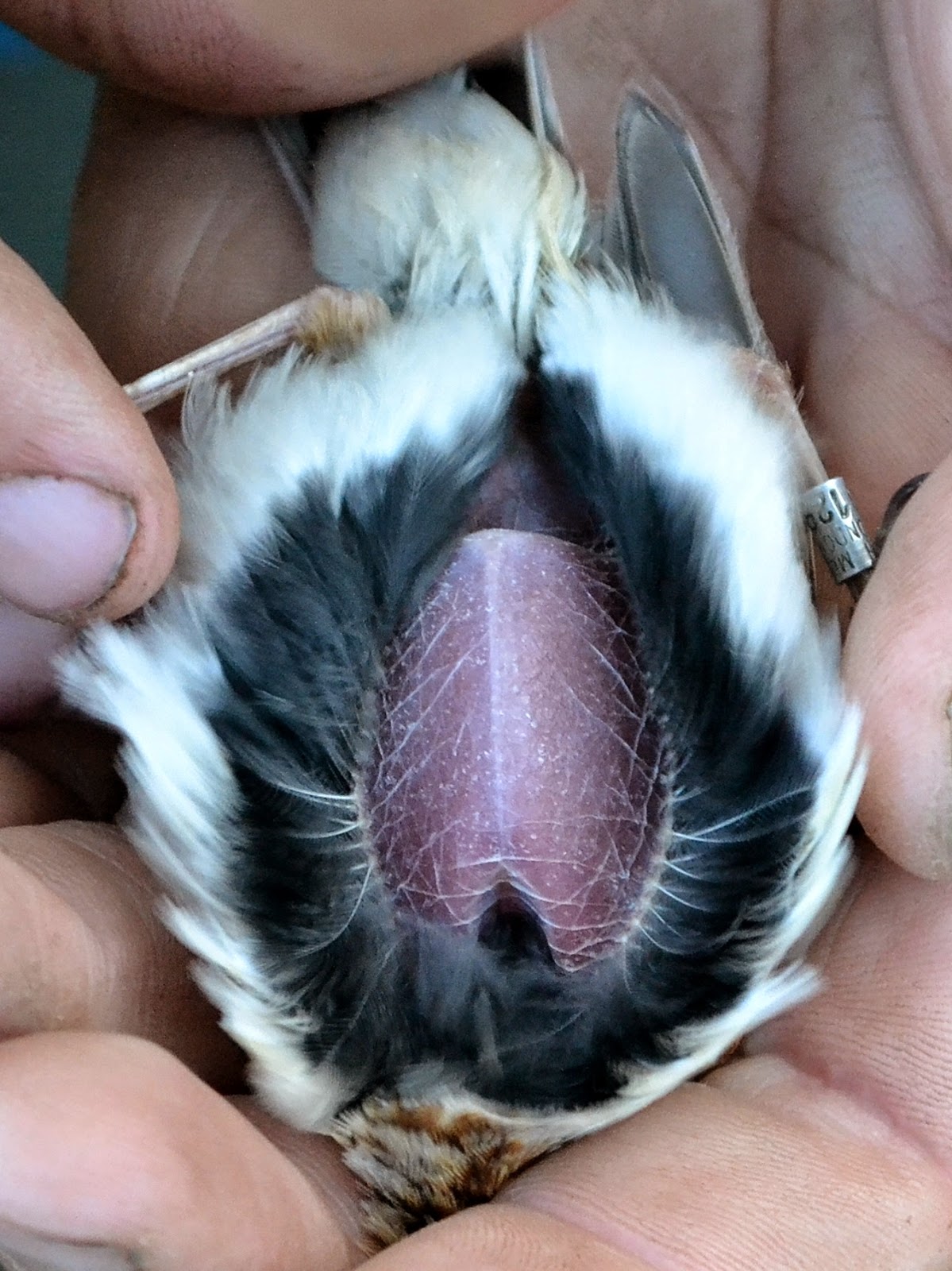 Talking of wear, also check out the comparison here between a fresh juvenile Reed Warbler and a worn adult. The one will have had its flight feathers for a month, the other for perhaps five or six months. 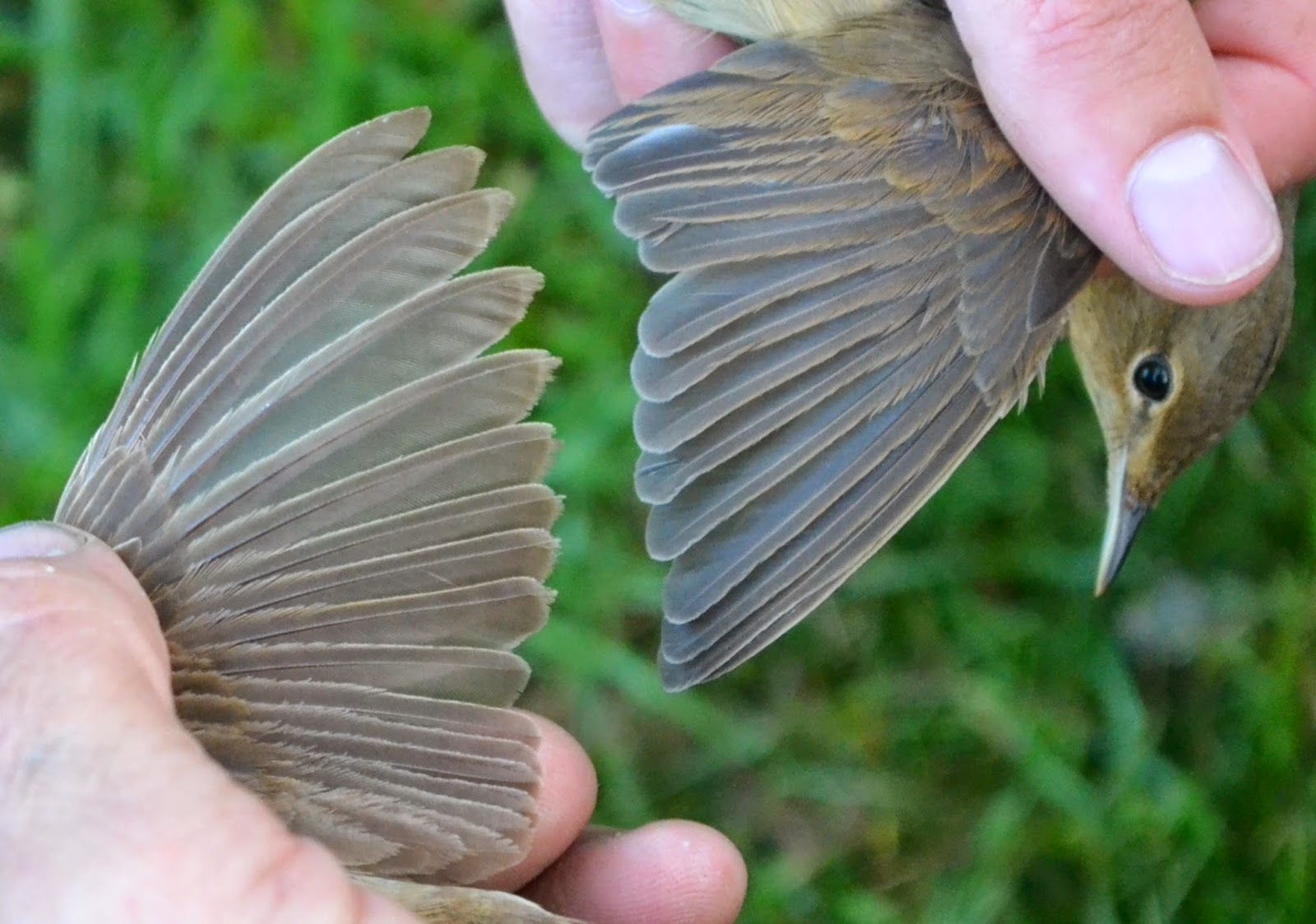 The last few days have also seen a good gathering of big gulls at Lizard Point, and we've managed to read a whole host of colour rings, including birds from Norway, NE Scotland, France and local SW birds.


Thanks to Dave Jones for the reedbed photos and Terry Thirlaway for the gull photos.
Posted by Mark Grantham at 17:02 No comments: