It was such a stunning spring day yesterday that there was only one place to be... out on the water! So we fitted in another visit to the Kittiwakes at Trewavas Head, this time managing to land by the engine houses. This part of the colony was worryingly quiet though, with fewer than 50 birds on the ledges, instead of the usual 65+ pairs! Just three of our colour-ringed birds were present, but hopefully this is just a slow start to the season here. 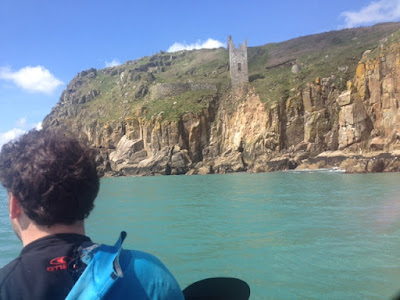 The main face at Trewavas Head was slightly busier which was encouraging. Here we were able to record a further dozen of our own birds, including two that have previously been seen on their wanderings - see here and here.


In amongst our own colour-birds were three French-ringed birds. Two of these are known to us already, but typically the one new bird to us was so high up on the face we could only see two colours and part of the metal ring, so it remains unknown (for now!).

Posted by Mark Grantham at 23:42 No comments:

Any excuse for a paddle

This morning a couple of us took to the opportunity for a paddle out to check out the Kittiwakes at Trewavas Head. Leaving from Porthleven, the swellier-than-predicted swell made things a little slow going and we were also unable to safely put the kayak in at the engine houses, so had to make do with a visit to just the main headland colony.

With only around 60 birds there at any time, numbers were down on previous years, but the to-ing and fro-ing of birds mean that we were able to record 19 colour-ringed birds as part of our RAS (Retrapping Adults for Survival) project. The 19 included 17 of our own birds and two French birds that are now regular breeders here. One of 'our' birds was originally ringed as a chick on Gugh, Isles of Scilly, in 1996, having a colour ring added by us in 2015. So at 22 years old this is our oldest bird in the project. 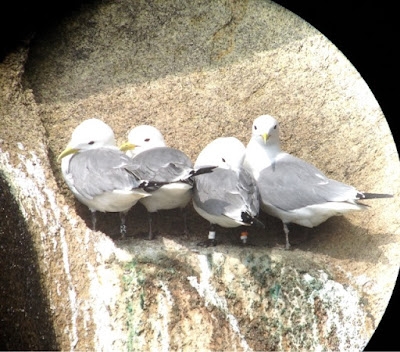 The pic above shows two of the other more interesting birds. AP is a bird we ringed as an adult at Rinsey Cliffs in 2012, remaining there until 2014 when the colony there effectively collapsed. It was one of the few birds that relocated to Trewavas Head, seen just once in 2016 and 2017. The rather more colourful bird was ringed as a chick in 2007 at Pointe du Raz, Brittany, France. It was seen in France in 2009 and 2010, then at Rinsey in 2012 and 2013, before moving to Trewavas Head from 2015 onwards.

Of the other birds, two had also been seen on their coastal wanderings, with one photographed at sea off Longstones Lighthouse in July 2014 and another seen at Gwennap Head in August 2017.
Posted by Mark Grantham at 17:51 No comments:

It's been a while since we've blogged, but with incessant poor weather and a late breeding/migration season we've really not been up to much! But some regular ringing did pay off recently, as Robbie Phillips relates:


"After ringing on the University of Exeter’s Cornwall campus for the last four years it’s always nice to have a new species for the site, so to catch three iskin midweek was a highlight. We were out again last weekend when a ringed Siskin was found in the net and I just expected it to be one from earlier in the week, so it was a shock to find that it wasn’t. Even more surprising was that it was carrying a foreign ring, and from Russia!! Where abouts in Russia the bird, aged as an adult female, had come from we thought would take some time to find out. For my first foreign control, I couldn’t have asked for more, well worth the years of visits and hundreds of Blue Tits." 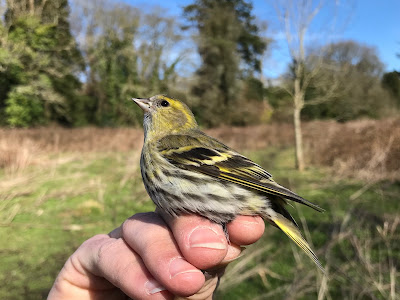 Incredibly, just 10 days after catching this bird, we heard news from the Russian Ringing Scheme. 'Our' Siskin had been ringed as second-year female in April 2017 at Rybachiy in the eastern Baltic, over 1800km from Penryn. It had presumably been ringed on spring migration, so may well have bred even  further east than Rybachiy! There have been fewer than 20 Russian-ringed Siskin found in the UK, but this is also the first ever foreign-ringed Siskin to be found in Cornwall.
Posted by Mark Grantham at 23:02 No comments: