We received news today that the Great Northern Diver we rescued from illegal netting on Carnsew Basin (more here) was found dead last week (54 days after ringing). Found by the RSPB warden for the area on a litter pick, there was no obvious reason why it had died, but sadly it wasn't fresh enough for a post-mortem examination. 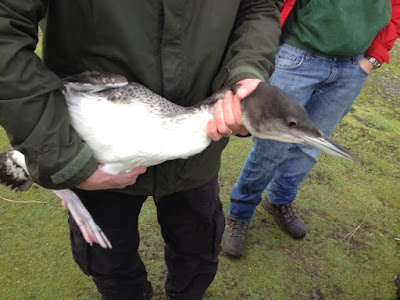 There have only been 12 ever ringed in the UK, with one ringed at Selsey Bill, West Sussex, in February 1973 found just 11 days later.

We also heard that one of our breeding Barn Owls was hit by a car in Lostwithiel last week, having to be put to sleep at a local vets. This was the female from the local pair, ringed just last summer, but hopefully it's still early enough in the season for another female to take over the territory...
Posted by Mark Grantham at 20:18 No comments:

After a great start to the gull-watching ear, it's been a bit quiet recently for gulls on the Lizard, with colour-ring sightings drying up a bit. But the drought was broken with the very nice record of an Icelandic-ringed Lesser Black-backed Gull: Blue YM23.

This bird was ringed as an adult back in May 2010 at Sandgerði in western Iceland. Since then, it's been seen in three different winters in Portugal (on the coast and at landfills) and in-between times also seen in Co Wexford (December 2012), our very own Hayle estuary (March 2015) and then at Southerly Point, Lizard a few days ago! A round-up of its trips are mapped below, but it's certainly covered many more miles than this...

This is the only Icelandic-ringed Lesser Black-back to be seen in Cornwall, so hopefully we'll see it again next spring! 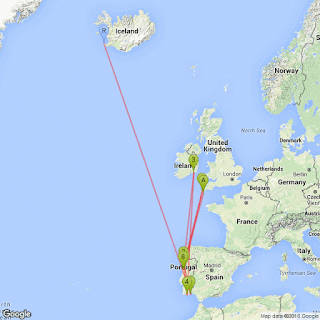 Posted by Mark Grantham at 14:48 No comments:

Well apparently yesterday was the last day of winter, so it was fitting that we had a day out that saw us cooing over the remnants of winter along with looking forward to the summer.

Whilst failing to put up a couple of Dipper nestboxes, we peered over the fence at one of our local sewage works (Constantine) to find the bushes there heaving with small stuff. At any one time there were at least 25 Chiffchaffs buzzing round fly-catching, and in amongst them were at least five Firecrest and two Siberian 'tristis' Chiffchaffs.

So that was the last gasp of winter, and the first signs of spring came in the form of a nest-building Dipper (where we were trying to put a box!) and also 39 Cormorants sat on nests on Mullion Island. Once again they've moved location, this time preferring the landward side of the island. There were also some signs of spring at Rinsey, with several Shags starting to nest-build and the first Kittiwakes also back on ledges, including CA (below), ringed as an adult in 2013. 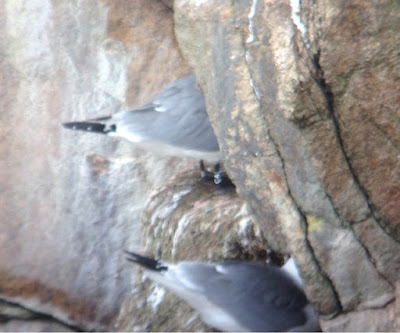 Posted by Mark Grantham at 10:10 No comments: