St Ives Herring Gulls back on the TV

For anyone that missed the original airing of the programme, some of our gull-tracking work that featured on the BBC is available again on iPlayer for the next couple of weeks. The programme 'Nature's Boldest Thieves' looked at the food-snatching behaviour of birds in St Ives and included some work on birds that we colour-ringed and also tracked using GPS data-loggers.

The programme can be viewed on iPlayer here, or just click on the image below. 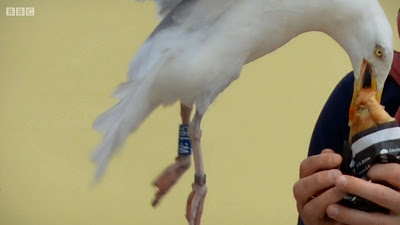 Why so many adult Sedge Warblers?

We've noticed this month that we seem to have been catching more adult Sedge Warbles than normal, so we thought we'd have a look back through our data from previous years and see if this is correct... So we compared the percentage of adults in our reedbed catches at Marazion/Gunwalloe and also at the migration site at Nanjizal.

So the August percentages look like this (with total number of birds caught in brackets)...


From this cursory glance at the data it looks like we were in fact correct, with a much higher percentage of adults in our catch this autumn. Why this might be is a bit of a mystery and it'll be interesting to see how this compares to other sites in the southwest and beyond.
Posted by Mark Grantham at 12:17 No comments:

In the past we've only shared a single Storm Petrel with the Channel Islands; a bird ringed on Burhou, Alderney in June 2008 that we recaught at The Lizard in August 2013. So it was a pleasant surprise to receive news from the BTO two of our birds from The Lizard had been recaught on Burhou in July. One of these had been ringed in July 2012 and the other was ringed on 16th July this year, recaught there just two nights later.

This got me thinking about the differences between the birds we caught at Porthgwarra in 2011 and the birds we now catch at Lizard (2012-15). The pattern of movements always struck me as being a bit different between the two sites, but is there really anything in it? In 2011 we ringed 190 birds at Porthgwarra (with 6 controls) and since then we've ringed 565 birds at Lizard (with 20 controls). The movements these sessions have generated re shown below:

Some of the differences are interesting, with numerous movements between Porthgwarra and Ireland (Counties Wexford, Sligo and Mayo), but none to/from Lizard. But our ringing at Lizard has shared many birds with Welsh sites, whereas we never traded a Porthgwarra bird with Wales. The obvious explanation for the Welsh movements is the increased ringing activity on the Welsh Islands in recent years, in particular on Skokholm. The table below shows the national ringing totals from the BTO's online ringing report and the big increase in effort in Wales is pretty obvious! But there's no real change in effort in Ireland (the figures here are for the Republic of Ireland), so the fact that none of our Lizard birds have been found there is unusual.

Whilst I was looking at all these recoveries, I thought I'd also look at the length of time between ringing and finding. It is generally thought that birds attracted to 'tapes' are non-breeding, prospecting birds in the first few years of life. This fits with our captures, with most birds being recaught in the next summer or sooner. Obviously there are some very quick movements between sites (we've had one day movement to/from both south Wales and France), but recaptures after more than two years are unusual. In fact, the longest time elapsed was the Burhou-ringed bird mentioned right at the start, recaught five years after ringing.


So whilst a quick look at the data doesn't really answer many questions, it certainly poses a few more questions and we'll just have to keep ringing birds to find the answers!

In other news, we have also just received a sighting of one of our Cormorants in France: our first foreign movement! TBD was ringed on Mullion Island in May (see blog post here) and was seen yesterday on Banneg in the Molene archipelago.

Interestingly, this isn't the first Mullion Island Cormorant to be found in France, as there appears to be an old record of a chick ringed on the island in 1969 that was found dead in Loire-Atlantique in 1971. We're not sure who would have ringed this bird, but watch this space for further details...
Posted by Mark Grantham at 12:47 No comments:

August is always an interesting and busy time at Nanjizal, with the first big push of migrant warblers coming through. Where other Cornish sites are catching <100 birds in a session, the valley at Nanjizal regularly produces catches three times this number. Just over the last week, morning catches of 341 and 281 have been dominated by Sedge Warblers (201 on one morning alone), but in amongst them have been a few more interesting species. 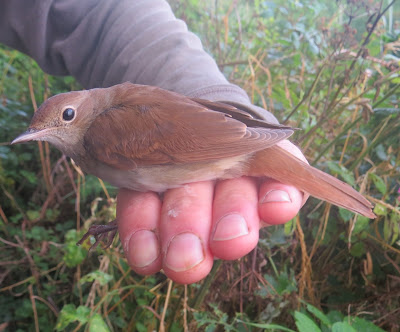 Anyone still stuck for an autumn ringing trip away might want to consider a trip down to Cornwall, so check out some extra info here.
Posted by Mark Grantham at 12:11 No comments:

With a small break in the weather we finally managed to fit in a CES session at Guwalloe Marsh on Saturday, so while we were there we did a Swallow roost in the reedbed the night before. With well over a thousand Swallows gathering, the birds looked good, the weather looked good and we had our first big Swallow catch of the autumn. 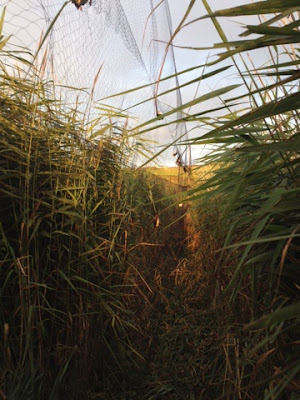 After a long night processing, we ended up with 174 Swallows (inc 14 adults), four Sand Martins and some odds and sods, so a good (if late) start to the hirundine season.

We followed the roost up by sleeping over by the marsh and then getting up for CES in the morning. The weather was kind for a change and with an extra net the final total of 89 birds was pretty acceptable, including 32 Sedge Warblers and 14 Reed Warblers. Only 69 of these were from standard nets, but this total is our highest ever for Visit 10.

What was apparent was that birds were already fattening up for migration, with several Sedge Warblers carrying lots of fuel: compare the Fat 0 bird weighing 9.1g to the Fat 7 bird weighing 16.7g and you'll get the idea. It was also interesting that it was the adult birds that were the fattest, with the average juvenile weight being 10.8g compared to 13.1g for adults.


Just to add a bit of culture to the day, we also stopped off to have a nose round the ongoing archaeological dig on the clifftop. The site is a mediaeval settlement and would have been the largest in the Kerrier area, so a bit of a change from the single farm and holiday shop here now! But with some fascinating archaeology on show it was a rather interesting aside...

Posted by Mark Grantham at 09:22 No comments: