Cornwall is a colourful place (for rings)

Over the years various members of the group and local birders have reported a wide variety of colour-ringed birds in the county. As we run a long-term urban gull project, not surprisingly our most-reported species is Herring Gull, but what about other species? A quick look at the numbers from the BTO's DemOn (Demography Online) database gives us records of over 4,500 colour ring reads of 26 different species, summarised by year here: 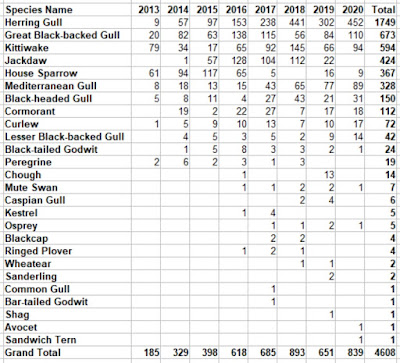 As expected, other gull species feature right at the top, followed by species that we run RAS (Retrapping Adults for Survival) projects on: Kittiwake, Jackdaw and House Sparrow. We don't ring any smaller gulls ourselves, so all of the records of Mediterranean and Black-headed Gull resightings come from other schemes, often abroad. In fact a lot of the larger gulls are from abroad as well, with French Great Black-backed Gulls topping the table, closely followed by Belgian and French Mediterranean Gulls.

Lower down the list are some more unusual species, details of which we've blogged about before, including:

Some of the other more unusual resightings include these smart birds:

We're always keen to receive new sightings though and can help in tracing birds with the different coordinators, so if you're lucky enough to see any colour-ringed birds then drop us an email with details - westcornwallringinggroup@gmail.com

Posted by Mark Grantham at 13:15 No comments: