With the first Barn Owl broods now all ringed and boxes monitored, it's a good time to take stock and see how the season has gone. Averaging out the numbers in the table below, we can see that the project continues to grow and for the first time we have data from over 100 boxes which is a greeat achievement. The occupancy rate contineus to be relatively low, but we hope that previously unoccupied boxes will be taken up by new pairs as the years go by. Of the boxes monitored, clutch sizes appeared to be slightly down on previous years, but the subsequent brood sizes didn't necessarily reflect this. The figure of 3.2 hides a much more complicated story though.

It was apparent as the season progressed that brood sizes (and numbers of chicks ringed) was decreasing, but this is always hard to measure. But if we simply look at the number of chicks present at ringing through the season then a trend does seem to appear. The sample sizes are rather low, but we do think there's something in the data. 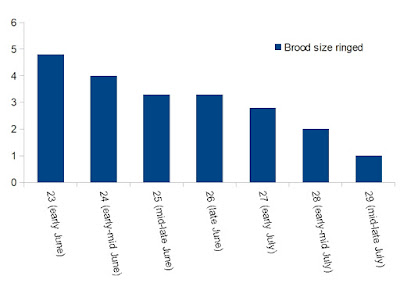 The much lower brood sizes later in the season we presume was due to the period of very unsettled weather, with plenty of rain. This makes feeding very difficult for adults which obviosuly has knock-on effects for chicks. We hope to be able to place cameras in numerous boxes over the winter (watch this space on that), which will give us much better data over the coming years.
Posted by Mark Grantham at 16:23 No comments:

With slightly higher hopes than last time, we paddled out to the Kittiwakes sites at Trewavas Head to check up on the c140 pairs nesting at the three sites. The first stop was Trequean Cove where there were encouragingly still good numbers of birds, but a closer look revealed just 11 nests still with chicks which was a poor return from the 40 sitting birds we found in May. There were plenty of our colour-ringed birds and so far this season we've seen 13 birds at Trequean that have previously been seen at the main colony or at the engine houses colony. This might suggest that birds are slowly moving along the coast, but why they might be doing this is unclear.

The reason for this became apparent as we paddled along to the engine shouses, where the 28 pairs we'd seen in May were down to just half a dozen forlorn birds sat on empty ledges. The main colony at Trewavas Head wasn't much better either, as despite there being plenty of birds still present (including 17 of our own colour-ringed birds and a French bird), there were just three nests with chicks, down from the 65 sitting birds in May. Why these birds have failed again so disastrously is a a mystery, but it's interesting that the nests dominated by younger pairs seem to be doing better than the established sites, so maybe change really is for the better.

To back up this move away from the main colony, we received an email from fellow Kittiwake workers in France (Professor Emmanuelle Cam from the University of West Brittany) with a report of two of our birds seen in their colonies in Brittany in recent weeks. Both of these birds are regulars at Trewavas Head: 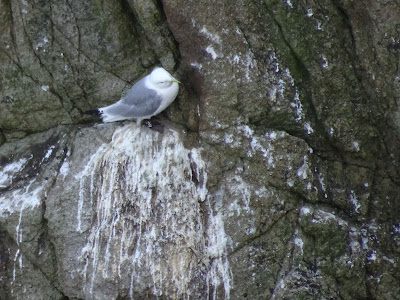 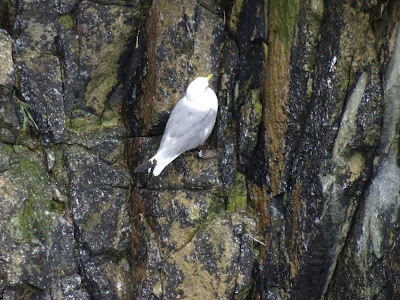 These are the first of our birds seen in your colonies, and it's great to have the coverage that produces these sightings. It'll be interesting to see what happens in the coming years and whether the colonies can recover.
Posted by Mark Grantham at 14:24 No comments: