It's always a highlight of a day out birding or ringing when you come across a Yellow-browed Warbler, so to find three on our first net round at Nanjizal was an absolute bonus! These stunning little birds originate in the Siberia and used to be rather scarcer than they are now, but with hundreds arriving along the east coast over the last couple of weeks it was only a matter of time before they filtered down to the southwest. 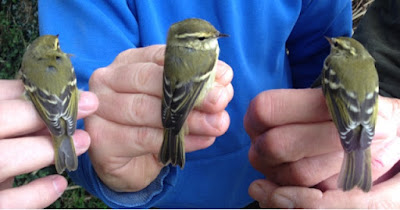 As if that wasn't enough, our second net round also produced three unringed Yellow-broweds, with one later in the morning bringing the total to a staggering seven birds! This brings the autumn total to10 birds, which compares well to previous years: the annual total in Cornwall counting backwards are 24, 13, 19, 8, 3, 4, 1, 7, 6.

The morning ended on 167 birds ringed, including 44 Blackcap, 28 Robin (fresh-in Continental birds), 27 Meadow Pipit, 26 Chiffchaff, two each of Willow and Reed Warbler, Grey Wagtail and Stonechat, a single Firecrest and the mystery bird below... Scroll down for the species. 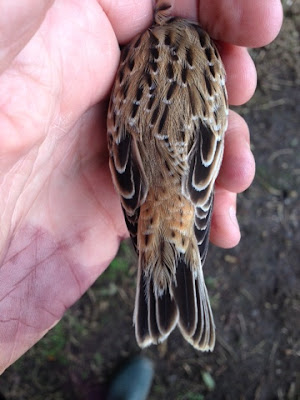 A very smart first-year female Whinchat!
Posted by Mark Grantham at 17:16 No comments: