Bank holiday Monday seemed to be the perfect day for a spot of kayaking, so three of us headed out to Mullion Island to have our first count of Great Black-backed Gull nests.

At first there didn't seem to be many birds on the island, but as we swept the island there were plenty of nests. Most were still with unhatched eggs, though some did have small chicks. In total we recorded some 83 nests containing 204 eggs/chicks, which is by far the highest number in recent years.


The high nest count is great news and almost rivals the key Cornwall site at Looe Island, where 86 nests were counted last week. We've always seen very low survival rates to fledging though, so it'll be interesting to see how many of these 204 eggs and chicks survive the coming weeks. 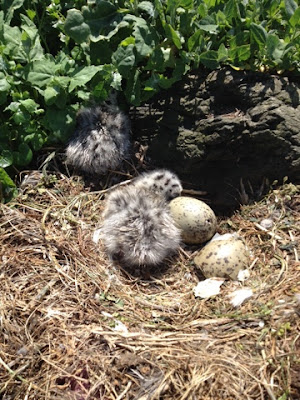 Posted by Mark Grantham at 19:22 No comments:

Barn Owls on the move

We did our first long day of Barn Owl boxes yesterday, checking a swathe of sites from Falmouth across to Godrevy. Around half were occupied, but not all pairs were breeding. It could be that some of these non-breeding birds were just in poorer condition, as the females on eggs were weighing up to 425g whilst those not breeding were more like 310g.

Those that were breeding were either on full clutches of eggs on with eggs just hatching, so it was almost perfect timing for the checks.


Several of the adults were already ringed, which is where the interesting information comes from. Of the three, only one was found where it was ringed, breeding in the same box since we started our monitoring project in 2011. The other two were part of a more interesting story.

A male now breeding near Praze-an-Beeble had originally been ringed as a chick 4km away near Rosewarne just last year. The male of this Rosewarne pair was also ringed, but had actually been ringed as a breeding bird near Gwinear (only 1km distant) last year. We're not sure if he left it was pushed out, but the Gwinear female is sat on a full clutch so has obviously found a new male!

Posted by Mark Grantham at 17:28 No comments:

A quick trip out to Portreath this morning to check for Kittiwake eggs brought an unexpected surprise. Aside from three French-ringed birds and several birds on 1-2 eggs, an adult was seen brooding a single downy chick. This is 5-6 weeks earlier than in previous years and seems to be incredibly early compared to other studies. 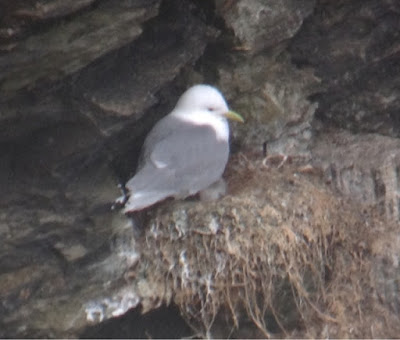 Posted by Mark Grantham at 23:43 No comments:

Back in the reedbed

The settled weather gave us the chance to get back into the reedbed at Gunwalloe for our second CES visit. It was a bit windier than forecast, but that's Cornwall for you! The session ended with just 17 birds, which is average of 23 for this visit below the (lowest is 15 in 2014 and highest is 33 in 2011).

As per normal the catch was dominated by Reed Warblers, including two birds ringed in 2013. But the oldest birds caught were both ringed back in 2011: a Cetti's Warbler and a Blue Tit. Whilst the latter had been recaught in 2012 and 2013, the Cetti's had avoided recapture since ringing!
Posted by Mark Grantham at 21:37 No comments:

Cornwall ringing isn't for the faint-hearted!

The last couple of days seem to have been a bit full on, but full of adventure! Yesterday a small team joined the ringing legend that is Tony Cross to do the annual round of Chough sites in the county, colour-ringing chicks to continue the RSPB's long-term work on the recolonisation of Cornwall by these enigmatic birds. It's a dirty and very hard job, requiring an array of climbing kit, but a full-day saw us checking most of the sites, with mixed success. Whilst some nests were empty or predated, we did ring healthy broods of two, three and four, with a few more to check next week. This might not seem very many, but the breeding population is dominated by young, inexperienced birds at the moment, so things will improve in time...

The long day yesterday was followed by a more sedate one today. Accompanied by two surveying apprentices from Natural England we did the first of our checks on Barn Owl boxes. We only visited half a dozen sites, finding birds on eggs, including one clutch of five eggs.The afternoon was then spent kayaking out to one of our Kittiwake sites at Trewavas Head to read some colour-rings on returning birds. Whilst we only found four of our own birds and a single French-ringed bird, we take any opportunity for a kayak out on a sunny day!

Posted by Mark Grantham at 23:12 No comments:

...which literally translates as hello three-toed gull, but really just relates to a few French-ringed Kittiwakes at Portreath this afternoon. 'Tridactyle' also relates to the Kittiwake's scientific name (Rissa tridactyla), and there are many other tridactyl animals, including a sloth, a giant-anteater, a woodpecker, a Jacamar (related to kingfishers), an Australian marsupial, a plume moth, a polychaete worm, an extinct scorpion-like arthropod and, oddly, Plum Powdery Mildew!

But back to Kittiwakes... So a sunny afternoon just cries out for a trip to the cliffs to check out the satellite colony at Portreath, with the main colony only viewable from sea. But even this small gathering of birds was worth an extended look, and no fewer than four French-ringed birds were recorded. All of these birds will have come from Point du Raz in France, so it'll be interesting to see when they were ringed and if they have interesting histories...

Two of these appeared to be 'squatters' which aren't actively breeding but just prospecting. Birds will exhibit this kind of behaviour until a nesting 'stump' becomes available which they will occupy. Excuse the poor photo quality, but phone-scoping at 60x magnification in heat haze is never going to produce the best results!

Posted by Mark Grantham at 17:27 No comments:

Back into the mud for the Gunwalloe CES

The start of our Constant Effort Site season at Gunwalloe is always a slow affair, but this morning's session was even quieter! The new boardwalk in one of the rides did make life rather a lot easier, but the catch of just 12 birds was a bit disappointing... We've actually only managed the first session twice since 2011 as it's normally too windy, but catching 16 birds in 2014 and 19 birds in 2015.

The warbler catch was just four Reeds and three Sedge, but three of these were already ringed, which is where the real value lies. The retrap Sedge we'd ringed in May 2015 (and recaught a month later) and the Reeds were ringed as an adult in 2014 (and recaught twice in 2015) and a juvenile in 2013 (recaught once in 2014 and twice in 2015). 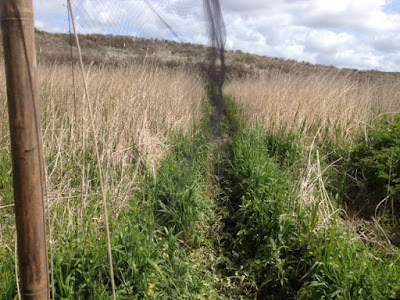 Posted by Mark Grantham at 13:18 No comments: