It was a bit of a surprise this week to receive an email asking for details of a sighting of one of our Mullion Island gulls from January 2018, as the finder had misplaced them. Lucky for us this was chased up as the bird had never actually been reported to us and is the first of our birds to be seen in Spain! So many thanks to Antonio Gutierrez for chasing this and to Juan Carlos Andrés for photographing the bird (below) in Ondarroa harbour on the north coast of Spain. 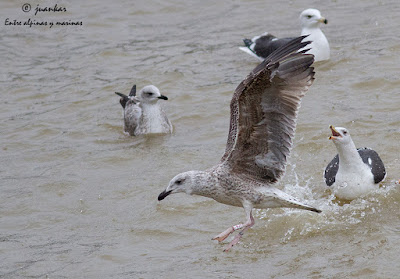 The ring code (L:BJ9) did sound familiar though and this bird had actually been photographed over the summer on a fishing boat in the Helford River back in Cornwall (below). What's interesting to see is just how worn this bird became over just five months.


This is only the fourth of our birds to be seen abroad: L:BF8 and L:BJ3 have both been seen at Lampaul, Ile de Ouessant, France and L:DC3 has been seen on Ile d'Yeu.
Posted by Mark Grantham at 11:02 No comments: