We recently received some interesting recoveries from the BTO, mostly of some pretty fascinating Storm Petrel movements. In the past we've traded quite a few birds with Ile Banneg, home to France's largest breeding population of Storm Petrels, but these reports were notable.

Over summer 2013 at Hot Point, Lizard, we only caught one French-ringed Storm Petrel (compared to four in 2012), but we've just heard that we had a great run of records of birds going the other way. In total five birds ringed at Hot Point in 2013 were recaught on Banneg later in the year, with a further bird ringed in 2012 unfortunately found predated there. This compares with just one going that way in 2012.

But what was interesting was when these birds were caught, with some making very quick movements over the 178km to Banneg. Birds ringed in June were recaught 35 days, 32 days and four days later, whilst a bird ringed in July was recaught three days later and one ringed in August was recaught the next day! I'm sure birds regularly commute backwards and forwards across the English Channel, but in theory non-breeding birds are more attracted to tape lures, but I bet these movements are of breeding birds...

We also just received details of a few movements from last autumn, including a Sedge Warbler ringed at Marazion and recaught in France five days later (but it did weigh 11g when ringed so was obviously getting ready for the off), a Spanish-ringed Reed Warbler recaught at Gunwalloe was ringed on spring migration (the first to be found in Cornwall), and a Chiffchaff we caught in November had been ringed in North Yorkshire a month earlier. This bird had come over 500km and was presumably on migration through the country when ringed.

Our run of colour-ringed Great Black-backed Gulls has slowed down a bit, so we've had to make do with the occasional Lesser Black-backed Gull instead! But Orange T015 was an interesting one, seen at Lizard point on 17th March.


It was ringed in February 2010 at a rubbish dump near Salamanca, central Spain (red marker), and is almost certainly a British breeding bird. In 2011/12 it wintered further east, seen at two other Spanish rubbish dumps (blue markers).


It was seen on the same dumps again in March 2013 and February 2014 and was last seen at Colmenar Viejo on 2nd March, so made a quick two-week movement back up to Lizard Point.


There have only been 15 records of Spanish-ringed Lesser Black-backed Gulls in the UK, but this is the second in Cornwall, following another colour-ringed bird seen at Gwithian in 2006.
Posted by Mark Grantham at 12:09 No comments:

Return of the Kittiwakes

After a tip-off that Kittiwakes were starting to gather on cliffs, I had a trip out to our RAS (Retrapping Adults for Survival) site at Rinsey Cliffs this morning and found about 40 birds back on ledges in our study colony, claiming some early territories. It wasn't the best weather for digi-scoping, so apologies in advance for the poor quality of the grabbed photos below! 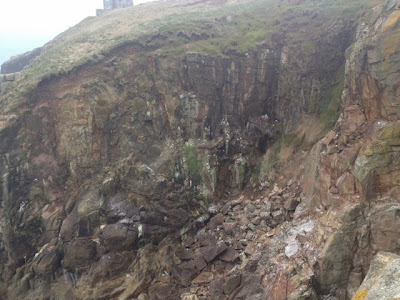 It was nice to see a few of my colour-ringed birds back as well, and of the five birds seen, three of them have interesting non-Cornwall origins. Below are A8 and AL, which was originally ringed as a chick on the Isles of Scilly in 1999 and had its colour ring added in 2012.

Another Scilly bird was CC (below), which was ringed on the islands in 1998 and recaught (and colour-ringed) by the group in 2013. 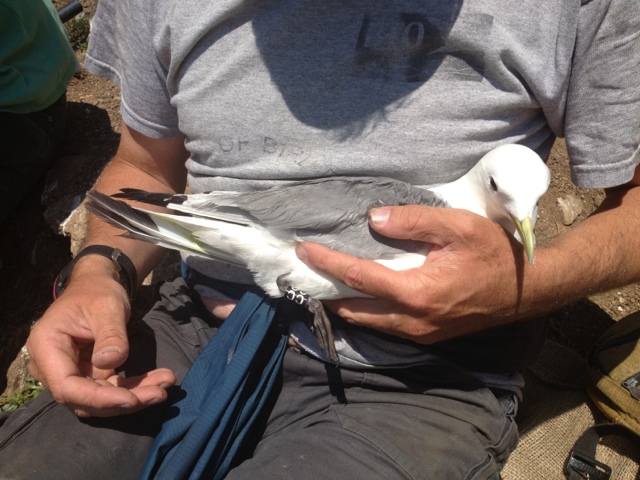 Along with the Scilly birds, there was also a single French bird (OYM,NWR), which dropped in too briefly to grab a digi-scoped photo, so here it is at Rinsey in July last year! It was originally ringed as a chick at Point du Raz, Finistere, in 2008. 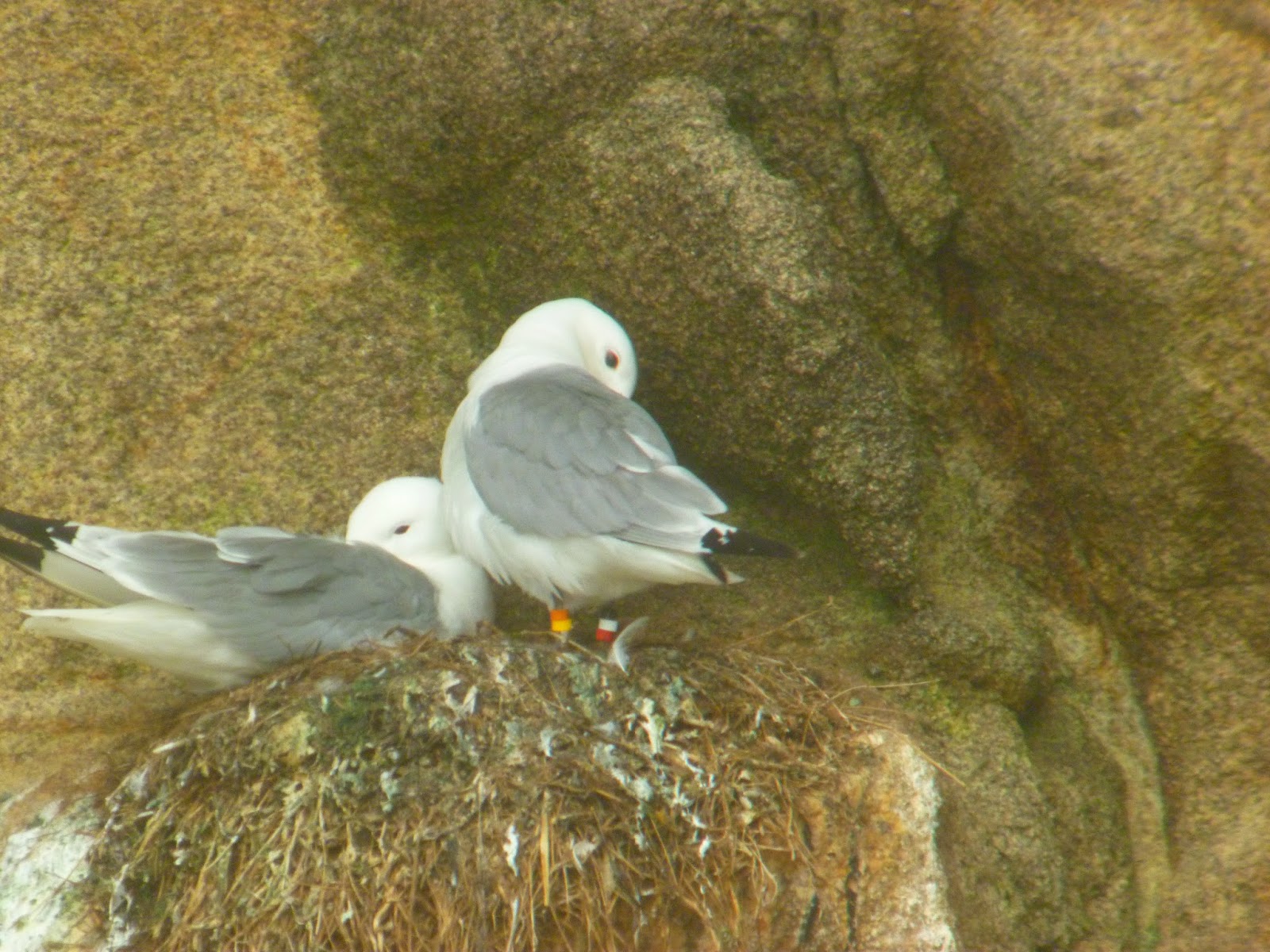 Posted by Mark Grantham at 15:11 No comments:

The last couple of weeks have seen large numbers of Great Black-backed Gulls (and the odd Iceland and Glaucous Gull, and even a smart Kumlien's Gull!) gathering on the reef at Lizard Point. There seems to be an endless stream of colour-ringed birds in amongst them as well, with birds from as diverse places as Norway, Wales, Channel Islands and France! So far we've recorded 13 different colour-ringed birds, and  the origins of some of those we've photographed (well Tony has photographed) are below.

Among a few other interesting birds was Herring Gull Red S:037 which I originally saw in Newlyn Harbour in October 2011. It had been rehabilitated and released at Burnham-on-Sea, Somerset, in July 2011, and was reunited with me again at Lizard Point on 11th March!
Posted by Mark Grantham at 18:54 No comments:

Chiffchaffs getting ready for the off

Finally the weather improved for long enough on Wednesday to get out and put up some nets! With winter fast coming to an end we took the opportunity to make a late visit to one of our sewage works sites at Ponsanooth. We ended up with 21 new birds and 13 retraps, including the typical sewage works fare of two Grey Wagtails, a Siberian Chiffchaff and several 'normal' Chiffchaffs. Highlight though was a net round of three Firecrest (including the two males below) and a Treecreeper, the latter being the first one ever caught by the group! 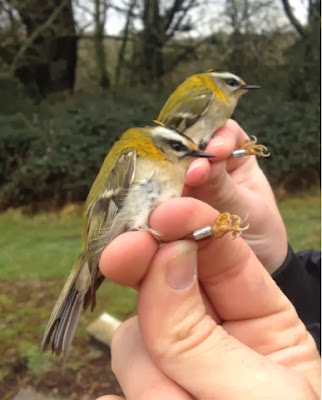 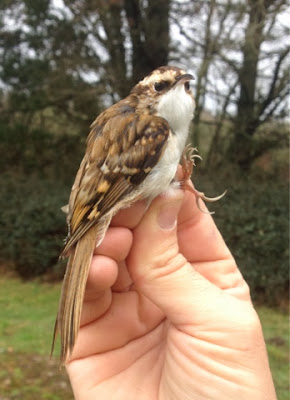 What was more interesting though was the weight changes in some of the retrap Chiffchaffs. EKT783 weighed 7.9g when ringed on 17th December, up to 9.9g now. EKT753 weighed 7.8g when ringed on 26th November, then 7.6g on 12th December and 7.9g on 29th January, now weighing 8.4g. Finally one of our controls (a bird ringed elsewhere), DYP947, weighed 8.3g when caught on 29th January now weighs 9.7g.
These birds were also fat, scoring 3 or 4 (on a scale of 0-8), compared to earlier in the winter when the carry little or no fat (score 0 or 1). These are both sure signs that spring is on its way and birds are preparing to move back north...

Posted by Mark Grantham at 09:46 No comments: