First CES juveniles of the year

This morning we braved the mud at Gunwalloe again to do CES visit 3, and were pleasantly surprised by the results. After a few years of quite low early-season catches, the standard nets (400' of them) produced 28 birds with an additional 30' net producing an impressive 15 birds!

Aside from the standard warbler fare (including both Reed and Sedge Warbler originally ringed in 2011), we caught our first recently-fledged juveniles of the year, in the form of a Robin and a Dunnock... 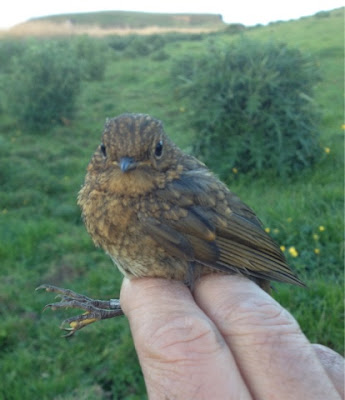 ...with the additional highlight of two controls (birds ringed elsewhere). The Blackcap below was ringed at Nanjizal, near Land's End (see more here), in September last year and we also caught a Reed Warbler originally ringed as a breeding male on the Isles of Scilly in June 2013. The latter bird is interesting as it appears to have switched breeding site by quite a way north. 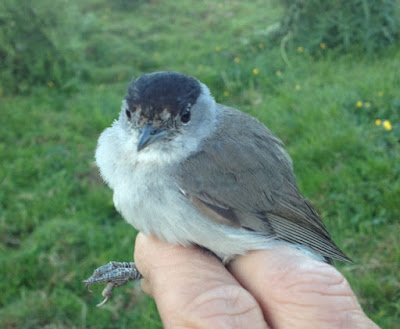 One last distraction whilst on the way to check out a small Sand Martin colony was a female Stonechat carrying food that we eventually pinned down to a small area of open dune grassland. A quick search revealed a brood of two half-grown chicks which were duly ringed and returned to home. 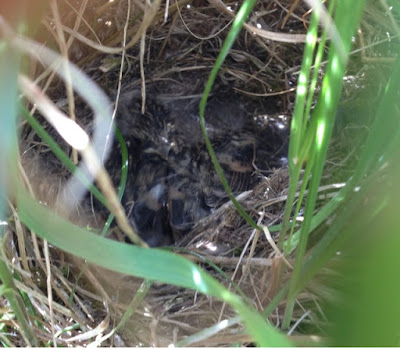 Posted by Mark Grantham at 21:19 No comments:

19-year-old Kittiwake and a few Shags

RAS is the BTO's Retrapping Adults for Survival scheme, where regular monitoring of a breeding population of ringed or marked birds gives a better understanding of between-year survival rates. The group carries out RAS studies on House Sparrow, Jackdaw and Kittiwake and yesterday we headed out in wetsuits and a ladder on a kayak (yes, a ladder bungied onto a kayak) to check on some of our seabirds.

First stop was Trewavas Head where we we have a small colour-ringed population of Kittiwakes. We were able to read a couple of our own rings, including a bird that had moved from the now-struggling colony at Rinsey, now resident at Trewavas Head, and another French-ringed bird from Finisterre. We also colour-ringed eight more adult birds, including one already carrying a metal ring: ES19858 was originally ringed as a chick on Gugh, Isles of Scilly, in 1996, so is already a good age! This is the third Scillies bird we've caught in the area, with the others ringed in 1998 and 1999.

On the way back we were able to stop off at Rinsey to ring a couple of accessible broods of Shag chicks, also managing to catch a single adult bird. They're surprisingly small in the hand, but still pack a punch with that hooked bill! 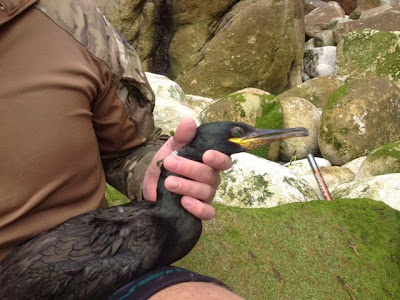 Posted by Mark Grantham at 20:47 No comments:

It's that time of year again when a few members of the ringing group head over to Guernsey to help out with the cannon-netting and colour-ringing of gulls on the tip there. This is probably the final year of tip trips, which have been run by Paul Veron and North Thames Gull Group. For more info on the project, check out the video from a couple of years ago:

Over the week we've caught just over 1,400 gulls, most of which were Herring Gulls, but also good numbers of Lesser Black-backed Gulls and a few other odds and sods. So below are just a few pics from the trip, perhaps useful for people to get to grips with ageing these birds.
Herring Gull

Lesser Black-backed Gull
Yellow-legged Gull
We were lucky enough to also catch a Yellow-legged Gull; only the third we've caught on the tip. This second-summer bird can be identified by the darker grey mantle, more orange orbital ring (around the eye), a very deep long bill and a much more delineated white rump. 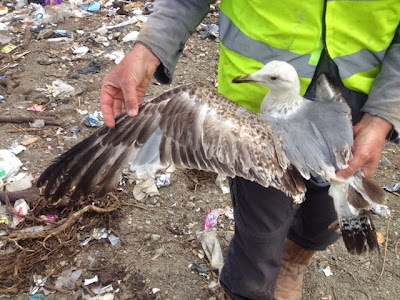 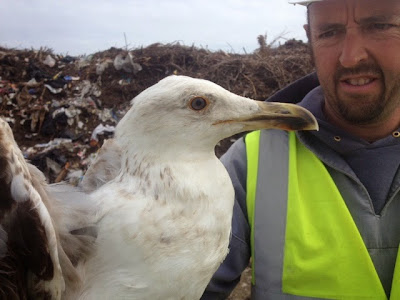 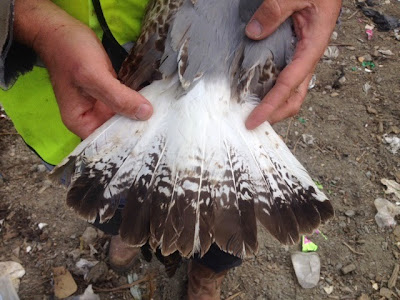 To continue the theme of early nestling ringing, yesterday saw three of us head over to Mullion Island on our annual Cormorant ringing trip. With 47 of the 50 pairs now nesting on an inaccessible cliff edge, we were expecting to ring just a handful of chicks, so the seven we found of perfect size were a bonus. 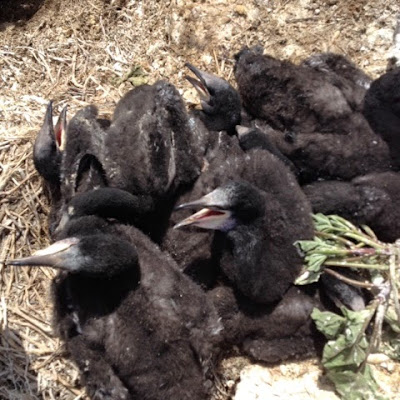 All were duly ringed and colour-ringed, so keep an eye out for our distinctive, coded orange rings on your birding travels. 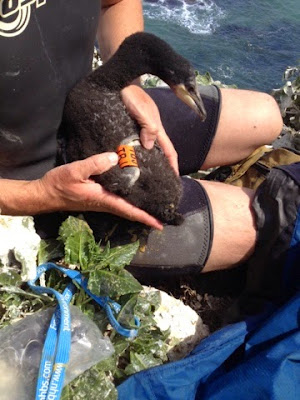 This trip also gives us the opportunity to count the number of active Great Black-backed Gull nests on the island, and a quick sweep gave us at least 37 nests, currently with 90 eggs. There were also over 20 'nests' that my yet to be laid in, but we don't know how many of these will be used. Of the 37 most already had three eggs laid, so birds are well on the way here. This count is well down on 2014 though, when a visit on 17th May found 62 nests, containing 174 eggs, so here's hoping that some of the empty nests are yet to be filled!

Whilst heading back to the kayaks (our new method of transport over to the island), we noticed a ragged wing sticking up out of the mallow. Assuming it might not be attached to much more, we dragged it up only to find it was attached to a some dried out remains, but remains with a metal ring and a shiny red colour ring! This is a Skokholm-ringed bird, and actually one seen in Portreath at the end of 2014, but we'll hear back with the full details soon. 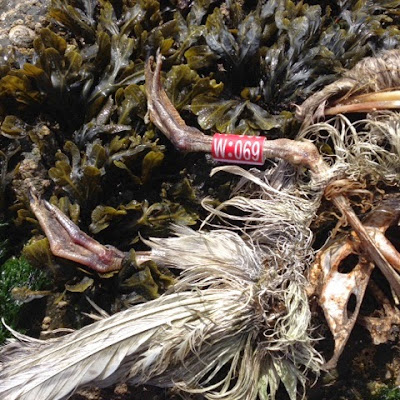 With summer vaguely arriving in Cornwall, this week saw us dusting off the mist nets to start the 2015 CES (Constant Effort Site) season at Gunwalloe. This is now the fifth year we've run the scheme, adding to the BTO's national dataset monitoring the breeding performance of a range of species.


The first few visits of the season are always a bit quiet, as we are mostly targeting reedbed migrants here, yet to arrive in big numbers. Those that have arrived are busy setting up territory and not flying round the reedbed, so the catch of just 16 birds was expected. This was mostly Reed and Sedge Warblers though, including two of the former ringed in 2013. We also retrapped Reed Warbler Y101100, originally ringed as an adult at Gunwalloe in June 2011 and retrapped seven times since on site. This is even more impressive when you consider this bird has now crossed the Sahara desert at least 10 times!

We are now also just starting the main nestbox checks of the year, with the first chicks ringed this week in the form of our usual Dippers in Idless Woods. We probably missed one brood that fledged quite early, but the second box had two fat chicks (from four eggs) at the perfect size for ringing. 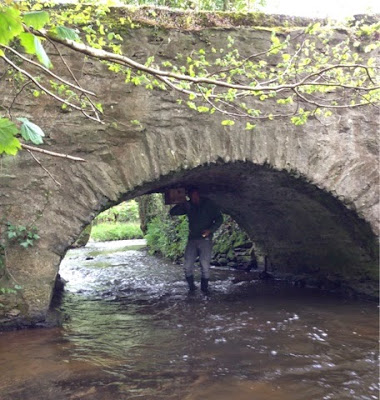 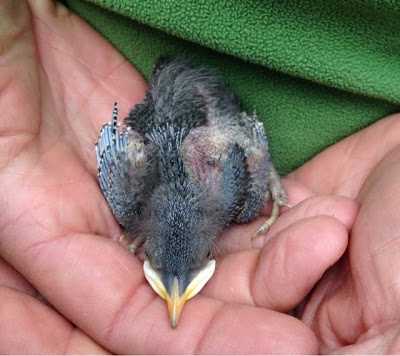 Last but far from least was another morning spent doing Barn Owl box checks, this time in the west of the county with National Trust ranger Shaun Boyns. Once again birds seemed to be doing pretty well down here, with two pairs already with chicks hatched! One interesting National Trust story was the male in the box at Trevean (an NT farm), which the nestbox camera had shown was ringed. We presumed it was a bird from one of our sites locally, but was in fact a bird that we'd ringed as a chick at Treveal (an NT farm) in 2014. At 8km, this isn't the longest movement we've seen, but it's great to see a bird breeding in its first year, and one we know very well indeed.

Next stop are Cormorant chicks on Mullion Island tomorrow and hopefully retrieving the remaining GPS data-loggers from our Herring Gulls in St Ives...
Posted by Mark Grantham at 17:36 No comments:

Early spring has always been a bit hit and miss at Nanjizal. With the site being so exposed to the winter weather, the vegetation growth usually lags behind sites just inland, so we presume that early migrants overfly the rather wintery-looking site. Like a lot of other sites in the southwest, early spring is dominated by Willow Warbler and Chiffchaff, but constant northwesterly winds are never good news, and this year seems to be no exception. When the wind does drop, birds seem to find themselves further east; perfect for Portland Bill!

Over the last winter, the surrounding fields at Nanjizal held good numbers of Reed Bunting and the first ringing session of the season targetting them (on 5th March) saw a nice surprise in the form of a Little Bunting. It could well have been overlooked during the winter months, but was light, with little in the way of fat, so may have actually been on the move back north. 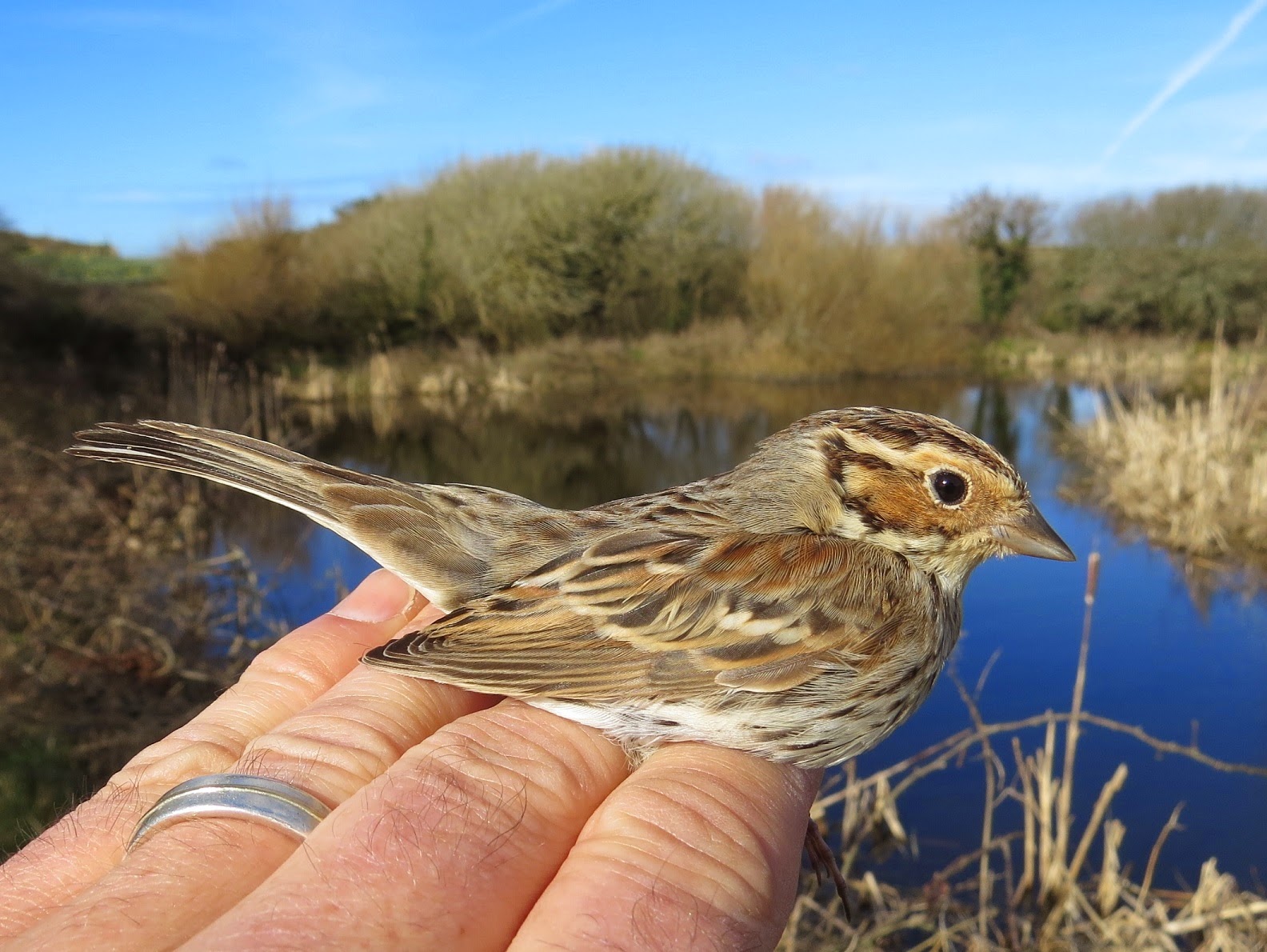 Chiffchaff numbers were very low in March and only one Willow Warbler was ringed, but things improved in April following a period of good weather. Despite there being no large numbers of Willow Warbler or Chiffchaff present, the vegetation is improving and Blackcap are finding the flowering Blackthorn to their liking, with the first Grasshopper Warbler and Whitethroat also now in.

Highlight of the spring so far came at the start of April though, with three Hoopoes frequenting rough, pony-grazed pasture next to the site. On consecutive days, a male and female were caught, giving a great opportunity to compare plumage details on these two second-year birds. 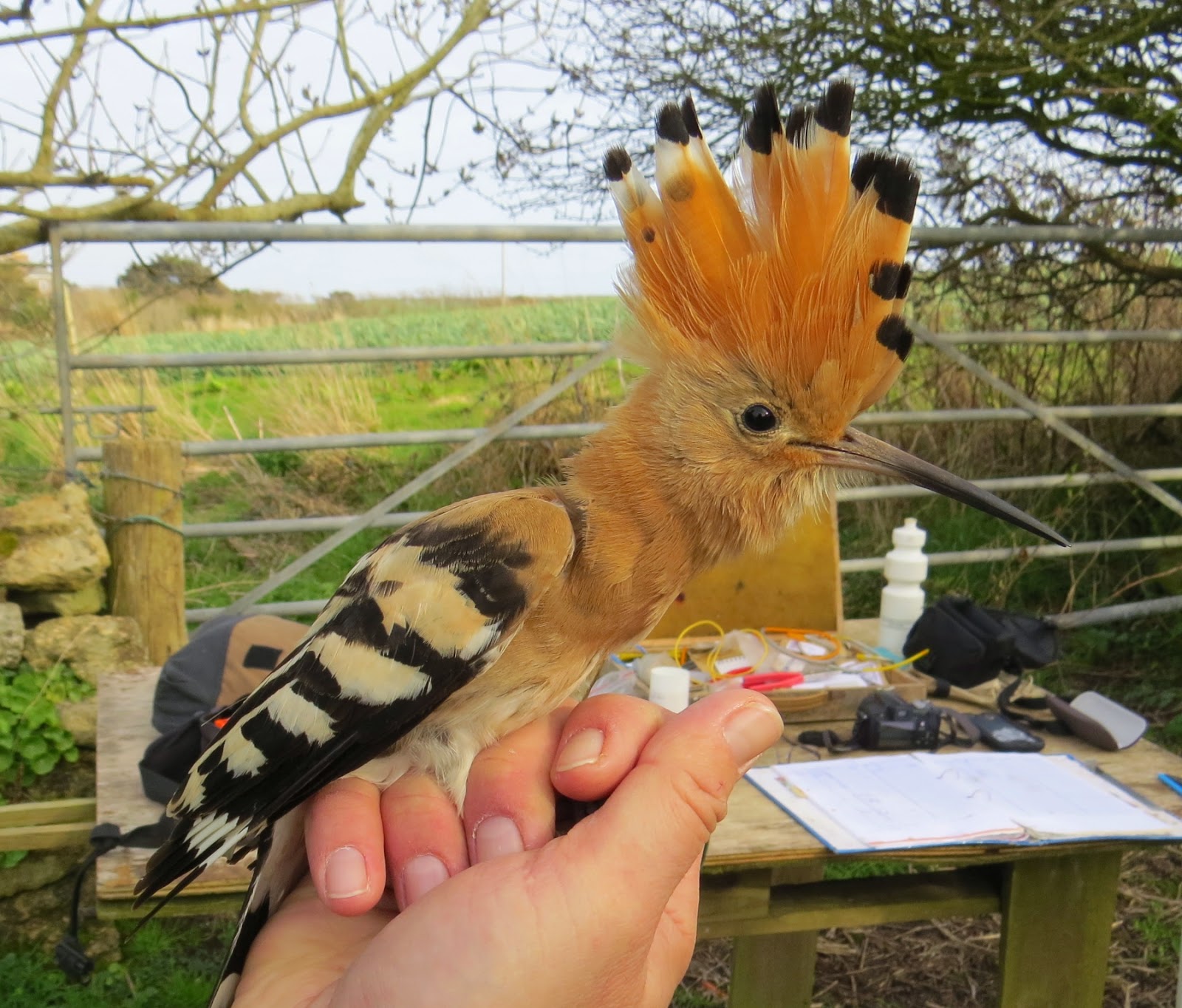 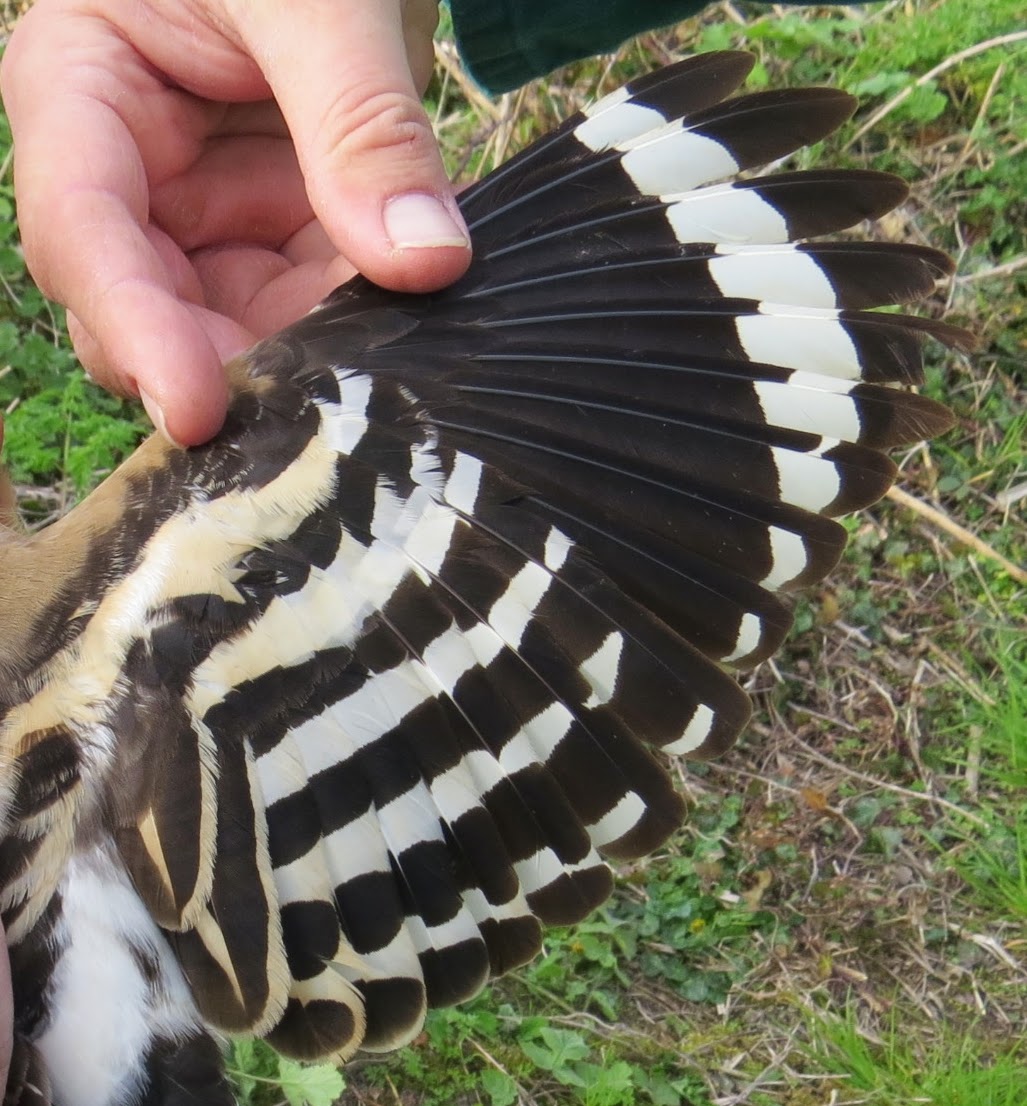 We won't necessarily tell you which is which of these two birds, but if you'd like to have a go at sexing them yourself then there's a great online resource here: 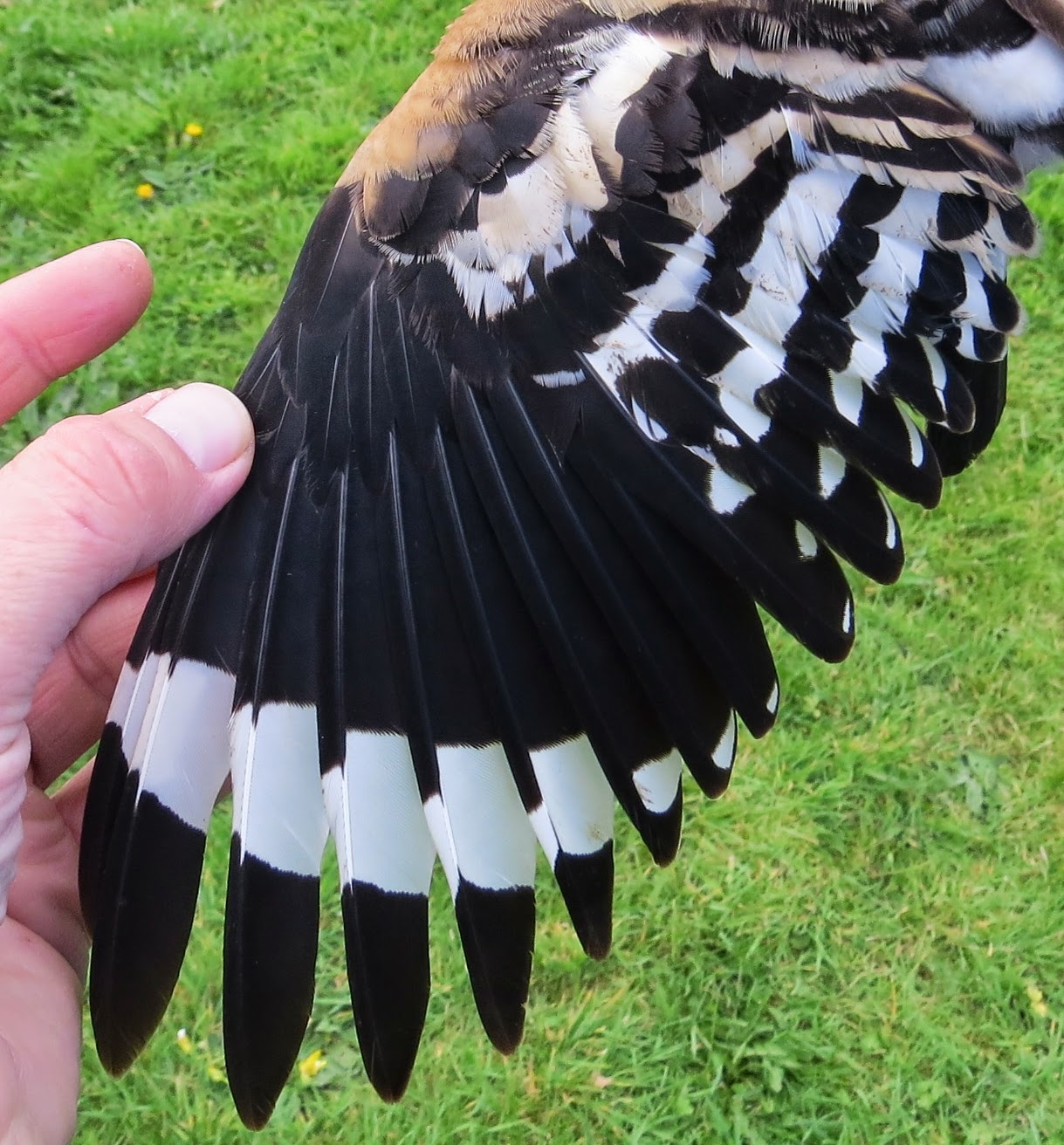 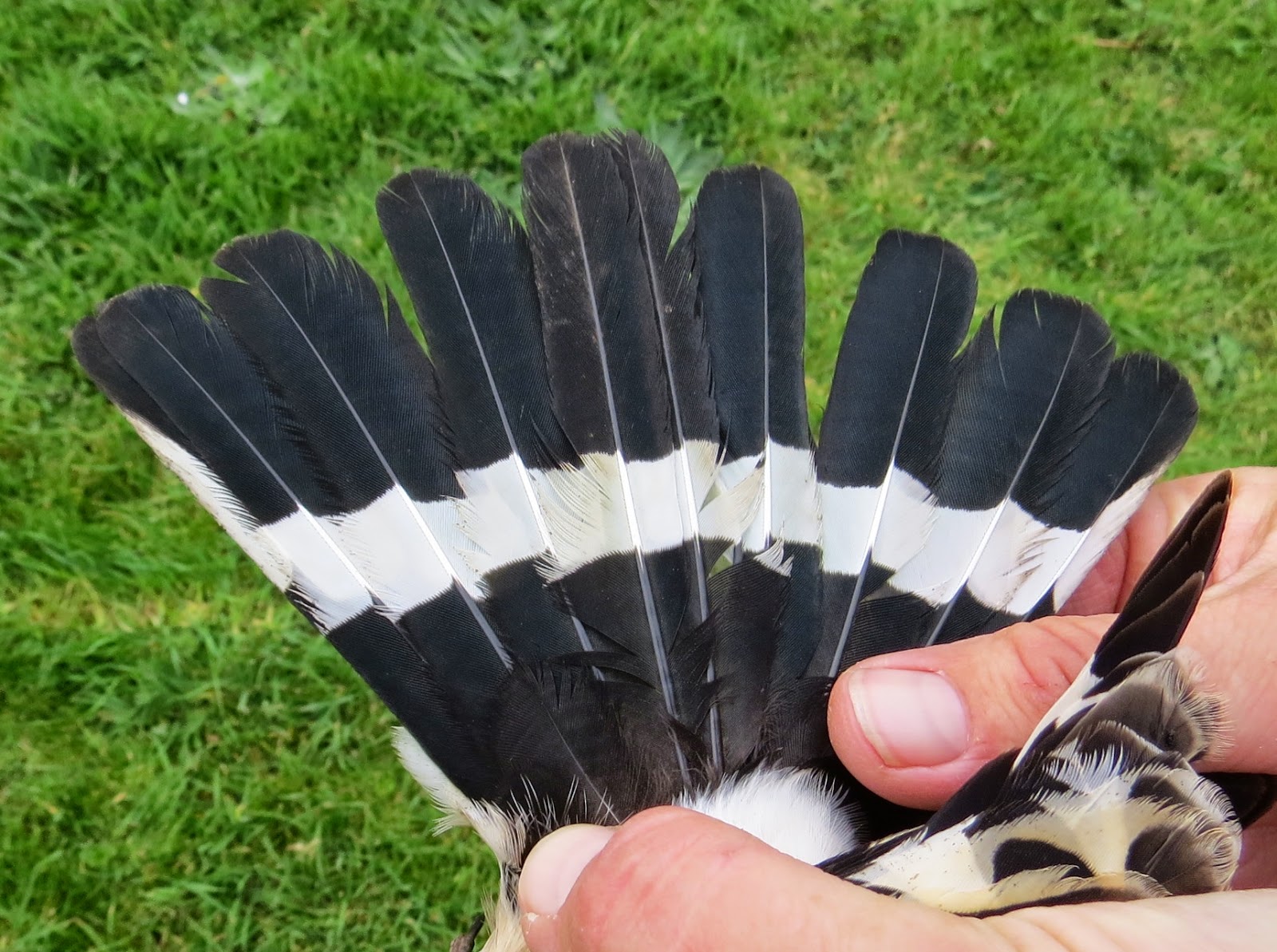 Posted by Mark Grantham at 07:22 No comments: