Meet D129878, the final bird of our 2013 CES (Constant Effort Site) season at Gunwalloe. The fluffy flanks give it away as a pretty fresh juvenile Reed Warbler, the commonest species caught at the site, and totting up, the catch of 52 adult and 63 juvenile Reed Warblers compares OK to last year (60 and 48), but still not up the totals from our first year in 2011 (88 and 96). 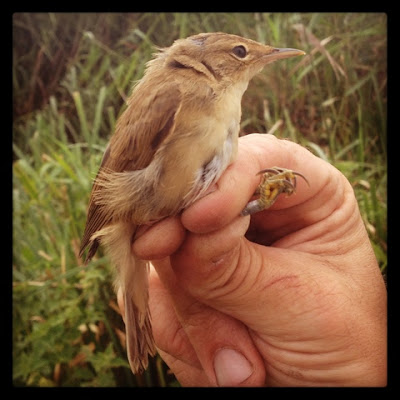 The next most frequent species caught, Sedge Warbler, fared somewhat better though. The poor breeding season in 2012 was reflected in the number of returning adults (just 13, compared to 33 in 2012 and 30 in 2011), but the number of juveniles was surprisingly good (64, compared to 36 in 2012 and 85 in 2011). One species notable by its 'near-absence' though was Cetti's Warbler: the total of three adults and 12 juveniles in 2011 dropped to three adults in 2012 and just a single juvenile this year.

Species diversity was also down, with 12 species caught this year down on the 15 in 2012 and 17 in 2011. The only real highlight were the five juvenile Stonechats ringed, but even these weren't quite the Aquatic Warbler of 2012 or the three Grasshopper Warblers of 2011. But looking on the bright side, the year was in general a slight improvement on 2012, but not yet recovered to the levels of 2011. The chart below shows the catch totals per CES visit each year: note how typically windy spring weather means we always miss the first visit, but at least it's Constant! 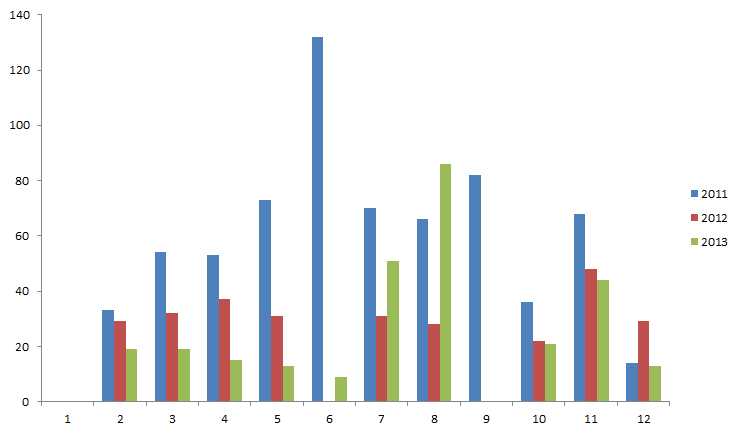 So hopefully the disastrous breeding season of 2012 and the wet start to 2013 won't be repeated next year and we can look forward to another bumper year.

Posted by Mark Grantham at 15:06 No comments:


After a summer of colour-ringing effort, it always pleasing to have the first reports from birders of a couple of our birds. First up was House Sparrow A31, photographed at Old Lizard Head on 30th July. This was too far from where it was ringed, but nice to see such a great photo of one of our birds 'in the field'.

Then just today we received a report of W:029, a Herring Gull ringed as a chick on the roof of a Falmouth Industrial Estate in July. This bird had foregone the promise of pasties, chips and bins in Falmouth and relocated to Stithians Reservoir, just 10km away. Again not a very long movement, but certainly an interesting one.

Other ringing recently has been a bit hampered by the weather... But between us we've managed a few Storm Petrel sessions, catching good numbers of birds (over 200 for the year now) and also birds from France and the Channel Islands. The latter is notable, with just 11 previous reports of Channel Islands-ringed Storm Petrels in the UK.

CES this morning at Gunwalloe was the first productive one for a while, with just under 50 birds caught, including good numbers of passage Sedge Warblers on the first net round. It was also nice to finally catch up with a Cetti's Warbler, the first of the year on CES! Numbers worryingly seem to have been on the decline at the site, with four birds caught by 20th August 2012 and 15 by 20th August 2011.

Posted by Mark Grantham at 23:50 No comments: