Late summer and early autumn sees small numbers of Osprey staging in Cornwall on their southbound journey to west Africa. The wooded creeks and rivers that feed into Carrick Roads seem to be particularly favourable. Devoran Creek has had two individuals for the last few weeks and one of these juvenile birds was sporting a coded blue ring on the left leg. This instantly identified it as a Scottish bird as birds originating in England and Wales receive a colour ring on the right leg. Despite being quite showy the bird typically remained just out of range to read the ring, but with persistent observation and some digiscoping the ring was finally read as JF1. 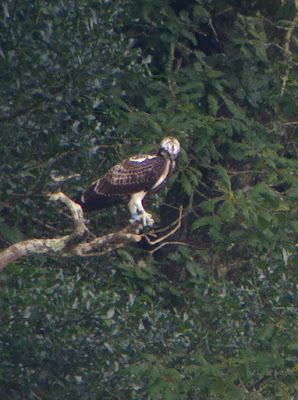 This bird was ringed as a chick on 13th July this year near Monymusk, Aberdeenshire, by Grampian Ringing Group; one of a brood of three. On size, it was deemed likely to be a male and this is the first confirmed sighting of JF1 since leaving the nest. 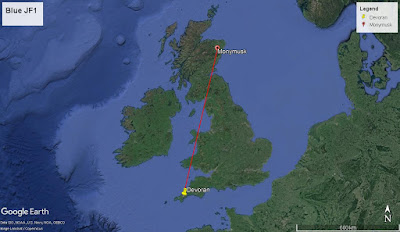 With various Ospreys being seen elsewhere in the county it is very much worth looking out for these impressive birds and, if you’ve got your eye in, reading a colour ring! Thanks to Greg Wills for the words and pictures and Ewan Weston for the photo of JF1 in the nest.
Posted by Mark Grantham at 14:20 No comments:

Thanks to Greg Wills for penning this post about his persistence in tracking down a mystery colour-ringed Curlew:

High tide roosts provide a perfect opportunity to pick through wader flocks for more unusual species and colour-ringed individuals. Gorrangorras Creek, adjoining Penryn River, plays host to one such roost, where birds gather on one of the few shingle banks waiting for the tide to retreat. The gathering typically holds good numbers of curlews and on 18th August a quick scan revealed a bird sporting a yellow colour ring. Due to worsening light, the complete code couldn't be determined and so a nervous wait took place hoping the bird would be present the next day in order to reveal the story the rings had to tell. 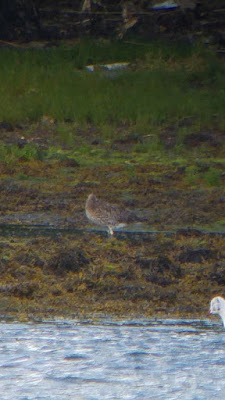 The following day after a brief walk further along the river, the flock was once again present; this time with distance and light on our side. The single ring instead revealed itself as a four-ring combination, all on the tibia. 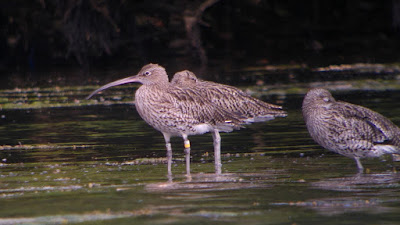 Now the puzzle really began! The two lower rings were obviously metal and yellow, though the upper rings seemed off-white, something that needs to be checked with some scrutiny with light blue and light green (lime) rings all used regularly in schemes. And so ensued much deliberation between the observers, forum conversations and Curlew ringers across Europe. After much to-ing and fro-ing, the identity was confirmed as being an adult female ringed light blue/yellow, light blue/metal, ringed on its breeding grounds near Ladbergen, Steinfurt, Germany on 18th May 2012. She has returned to the same breeding area every year until 2017. 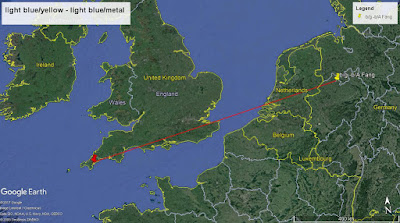 This isn't the first German-ringed Curlew to be found in Cornwall, with a bird from the same scheme Red/Metal, Red/Green seen at Rosemullion in August 2014. There was also a 25-year-old German-ringed bird killed by a bird of prey at Gwithian, a 20-year-old bird found dead near St Mawes and an 18-year-old bird hit by a car near Carnon Downs.

Thank you to Gerrit Gerritsen and Christian Kipp for their assistance in confirming the identity. Christian’s father Manfred has ringed round about 3,000 Curlews in Germany and between them they have resighted 160 colour-ringed birds in their breeding areas, most of them in Steinfurt.
Posted by Mark Grantham at 21:35 No comments:

Email ThisBlogThis!Share to TwitterShare to FacebookShare to Pinterest
Labels: curlew

Whilst September is the official start of autumn, migration has been in full swing at Nanjizal during August. During the month, there was no coverage from the 14th-20th (peak Sedge Warbler passage) due to family holidays and a short period at the start of the month. None the less, a non-too-shabby total of 1,698 new birds was achieved. Unlike a lot of coastal sites, good numbers of birds at Nanjizal usually coincide with still clear nights where the birds can pick good habitat, rather than being happy to land on the first bit of land they see whilst flying through inclement weather. As you can see from the totals the main species trapped are species that have a tendency to migrate SSW in autumn, with Sedge Warbler and Blackcap both funnelling down in big numbers. This funnel affect also brings a good number of dispersing British Robin, as we always get good numbers at the end of August into September. Other species such as Willow Warbler are never in such large numbers.

The month also saw a few rare and scarce birds appear in the nets, predominantly birds from the south, as there hasn't been much arriving on the east coast to filter down. A blast of south-eastlies on the 22nd seemed to do the trick and a good run started with a Wryneck on the 24th, white-spotted Bluethroat on the 25th (one of 224 birds ringed that day). The 26th then produced the second Melodious Warbler of the month (the first was on the early date of 10th) and for the second month in a row a Blyth's Reed Warbler, this time a first-year bird. 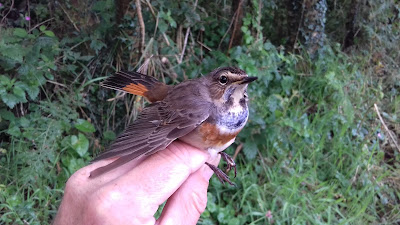 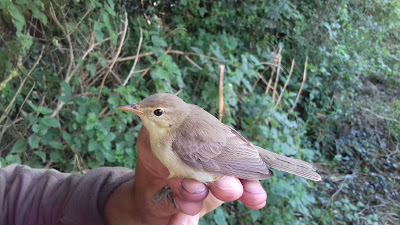 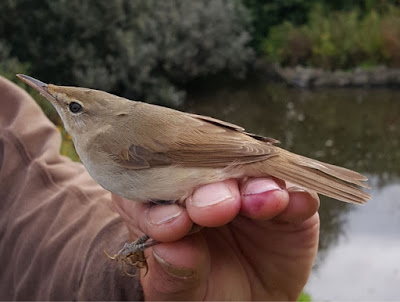 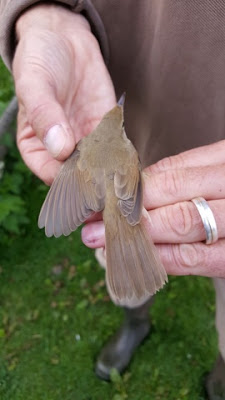 Posted by Mark Grantham at 10:33 No comments: