After another succesful season at Nanjizal, the nets were finally taken down yesterday. Whilst there are boind to be a few more wintering Chiffchaff and Yellow-browed Warblers on site, it's time to focus on other things.

So time for a quick summary of the 2014 season, when an exceptional 5524 birds were ringed. The top five species ringed for the year were:


But some of the totals of scarcer species are perhaps more notable:


Add to these totals a fair smattering of rarities (Aquatic Warbler, Paddyfield Warbler, Barred Warbler, Common Rosefinch and Little Bunting) and it's been a good year! If anyone is interested in ringing at Nanjizal (and joining the autumn warbler monitoring at Marazion  Marsh RSPB reserve), then check out more details on the Nanjizal page.

Posted by Mark Grantham at 18:22 No comments:

Email ThisBlogThis!Share to TwitterShare to FacebookShare to Pinterest
Labels: nanjizal

Helston gulls and our first Skylarks

After putting up a new Barn Owl box with the National Trust yesterday, I couldn't resist stopping off with a loaf of bread at Helston Boating Lake to see what gulls were around. I soon had a good gathering of Black-headed Gulls, along with a few other scroungers. The few birds there included the regular White 23D8 from Berkshire, but also a young Herring Gull with a nice blue ring! 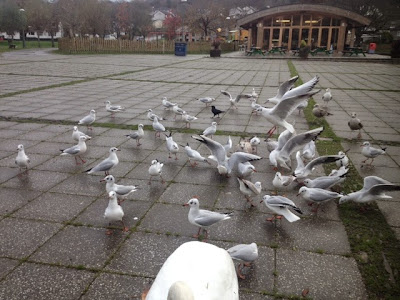 W:047 was ringed on an industrial estate roof in Falmouth in June. This is only 15km from Falmouth, but still interesting to see it leaving the town rather than hovering round eating chips.

Later in the afternoon we then set nets out at Predannack in the hope of catching some of the 100+ Skylark using the set-aside fields there. Setting up seven nets in an 'H' pattern, we put a 'tape' on pre-dawn and at first light walked the adjacent field, moving over 30 birds towards the nets. But with a little too much dawn light, we only managed to catch eight birds, but now know better for next time (tomorrow). These are the first Skylark ringed by the group and weighing in at almost 40g some were quite impressive! 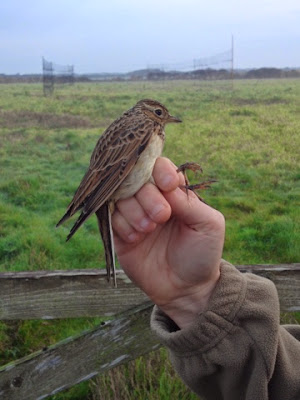 Swithching the 'tape' (actually an MP3 player) to Meadow Pipit, which seem to be less wary of nets in daylight, we topped up the day's catch with 16 Meadow Pipits.

Posted by Mark Grantham at 10:17 No comments:

Peregrine and Blue Tit on the move

Unrelated movements I'll add, but both quite interesting nonetheless! At the weekend we were emailed the photo below of a Peregrine seen at Pointe de l'Herbaudière, Ile Noirmoutier in western France. It's a bit hard to make out in the photo, but the ring was read by two people as Yellow JF, which makes it a bird we ringed as a chick at Kenidjack in May this year. This is a really interesting movement in its first winter (some 417km), but not unprecedented, with one other Cornish-ringed Peregrine seen in France. 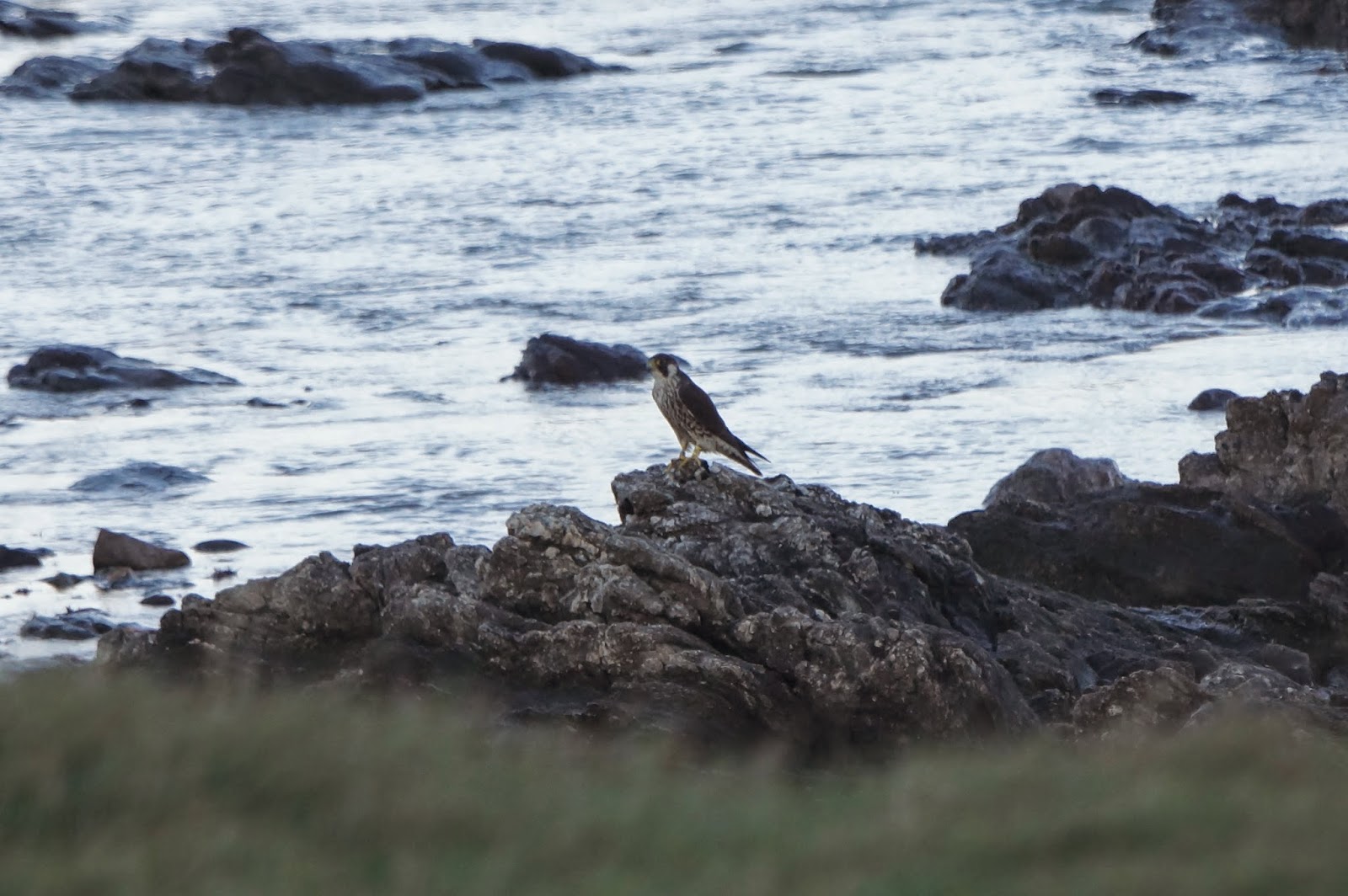 Our second exciting movement of the day came from a new ringing site near Predannack, where a wild bird seed crop has been planted at Teneriffe Farm. Our morning session didn't catch many of the finches (Chaf, Green and Linnet) in the field, but did produce a surprisingly large number of Blue Tits. One of these was already ringed though (with a group ring), so we presumed it was from a Lizard garden just a few kilometres away, but it was in fact a bird ringed as a nestling at Bonallack, near Gweek, some 10km from Predannack. This doesn't seem the longest of movements, but in the Blue Tit world it's quite impressive!

The fields at Predannack do look quite promising though, with over 110 Skylark in two large fields and a good scattering of finches and even the odd Snipe, Lapwing and Golden Plover. A couple of brief calls very reminiscent of Red-throated Pipit also livened up the morning, but we never managed to pin that one down...

Thanks to Dominique Robard for reporting and photographing the Peregrine in France.
Posted by Mark Grantham at 16:27 No comments:

Thinking we'd have a busy thrush day at Nanjizal, a few of us headed out to Penwith in anticipation, but it wasn't to be. The curse of Grantham struck again, and our catch total of 39 new birds (and a scattering of retrap Wrens) was a bit on the low side...

But it did include a couple of nice Siberian visitors, in the shape of a Yellow-browed Warbler and a Siberian Chiffchaff. I thought I'd leave it unannounced in a bird bag as a little surprise for Guill McIvor, who runs the Exeter University Jackdaw project around Stithians and Penryn.

See left the slightly bemused look on his face on taking something small out of a bird bag, before the lightbulb moment happened and the resultant childlike grin below developed! 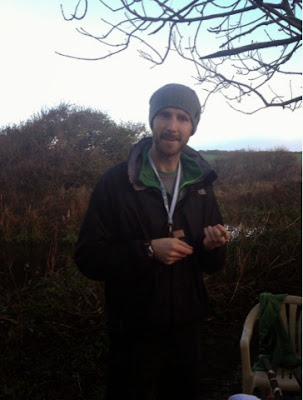 Our second Sibe of the day was a rather smart Siberian Chiffchaff (tristis). It wasn't calling unfortunately, but the general lack of olive tones (it did have a green wash over a lot of the upperparts), gleaming white underparts and striking face pattern did make it stand out amongst the five more typically olive local Chiffchaffs (collybita). 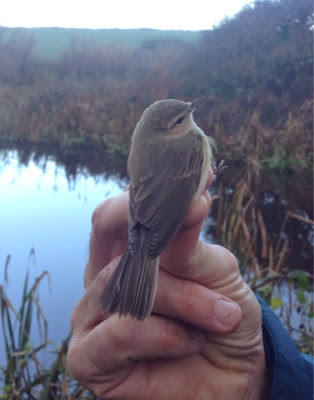 Posted by Mark Grantham at 16:16 No comments:

Birds of a feather...

...and a rather smelly feather at that! But do they really stick together?

We've just received various reports of our ringed birds from BTO, detailing when/where they've been found subsequently. For a House Sparrow and Blue Tit ringed at the Stithians feeding station this wasn't too far, being found just along the road; the former found dead and the latter killed hitting a window.


But we did also receive news of two of our Storm Petrels recaught on Skokholm Island. Both had been ringed at Hot Point, Lizard, on 11th July 2013, being recaught on Skokholm on 24th and 30th July 2014 (see details on the Skokholm Island blog). Interestingly, last year ringers on Skokholm also recaught two other Stormies ringed on 11th July, so there musty have been something special about that night. Looking back, we ringed 78 birds that night, which is the second most we've ever caught in any one night at Hot Point, beaten only by 80 birds on 7th-8th July 2013 (blogged here). So maybe there was just something special about that week...

The map below shows Hot Point, Lizard, in yellow and all of the sites where we've exchanged Storm Petrels in red, with Skokholm highlighted in orange. The bias towards the English Channel and southern Irish Sea is perhaps not surprising, but it's a bit surprising we don't draw in more passage birds heading to colonies further north.

Posted by Mark Grantham at 17:36 No comments:

Blackcaps galore and a smart Little Bunting: October at Nanjizal

After a really good September's ringing at Nanjizal, hopes were high for an even better October, but sadly it wasn't to be. Strong winds, rain and fog reduced October ringing sessions considerably across the county and despite its sheltered location, Nanjizal suffered as much as any.

Despite the weather though, over 800 birds were ringed during October, including 355 Blackcap and 135 Chiffchaff. The late run of Blackcaps brought the year total up to an incredible 1253, which is already by far the highest-ever annual total ringed in the county. The BTO online ringing report shows county ringing totals back to 2006, and the highest Blackcap total since then was 624 birds in 2011. In fact, the average annual total since 2006 is just 389 birds! So even considering the well-documented population increase in Blackcaps in recent years, the massive jump in ringing totals is amazing.

Other species ringed in good numbers included Sedge Warbler (bringing the year total to 1204), Whitethroat (340) and Grasshopper Warbler (136). On the rarity front, with so many Yellow-browed Warblers arriving up-country, we were hoping to beat last years total of 12 birds ringed, but just six were ringed in October: maybe November will see a big push of birds heading west. The pick of the bunch though, was a very smart Little Bunting ringed on 11th October; still not an annual visitor to the county. 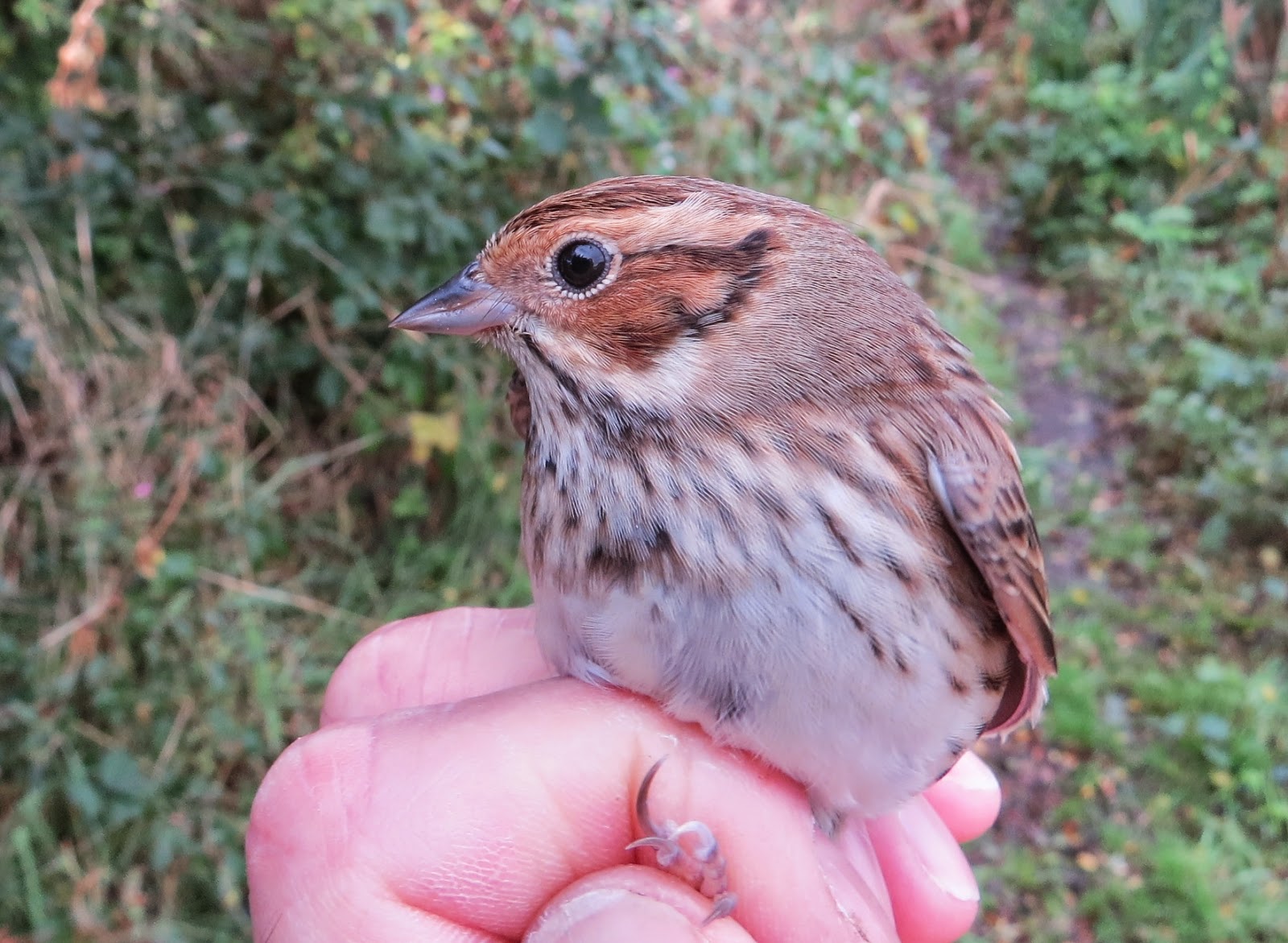 Although the east coast has recently seen huge numbers of thrushes arriving in the last week, very few have been coming through Cornwall. Also seemingly lacking are the expected big numbers of Chaffinch, although the last few days has seen a notable increase, as well as the first flushes of Redwing and Song Thrush. So here's hoping they arrive soon, before Nanjizal closes down for the winter...

Posted by Mark Grantham at 21:52 No comments: