Last few Chiffchaff of the year

Barring calm enough winds tomorrow to net a few garden birds, today saw the last mist-netting of the year for the group. A morning start at The Lizard caught a few Goldfinch, Greenfinch and House Sparrow, and we then headed on to Gwennap Sewage Works. The cold start to the day had brought reasonable numbers of birds into the works, but the afternoon sun meant the insects were up in the trees, so most of the 20 Chiffchaff and three Siberian Chiffchaff there were too high to catch. But enough were milling round the site that we still managed to ring seven collybita Chiffchaff and one tristis Siberian Chiffchaff. 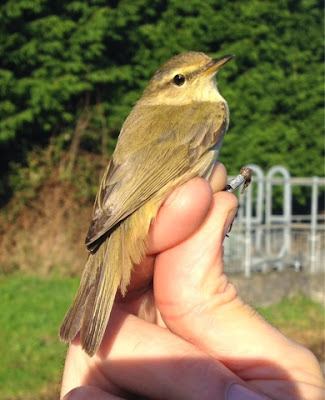 Travelling between the two sites today, we stopped off to check a dead bird on the road for rings, but by the time we'd turned round it had miraculously recovered and was stood in the middle of the road! After narrowly being missed by a passing car, we managed to scoop up a stunned adult Water Rail and take it with us. After a short while in the bag we normally store our nets in (and a nice portion of Sardines we bought for it) it recovered and was quite feisty. So it was duly ringed and released into the more salubrious setting of the new reedbed at Gwennap. 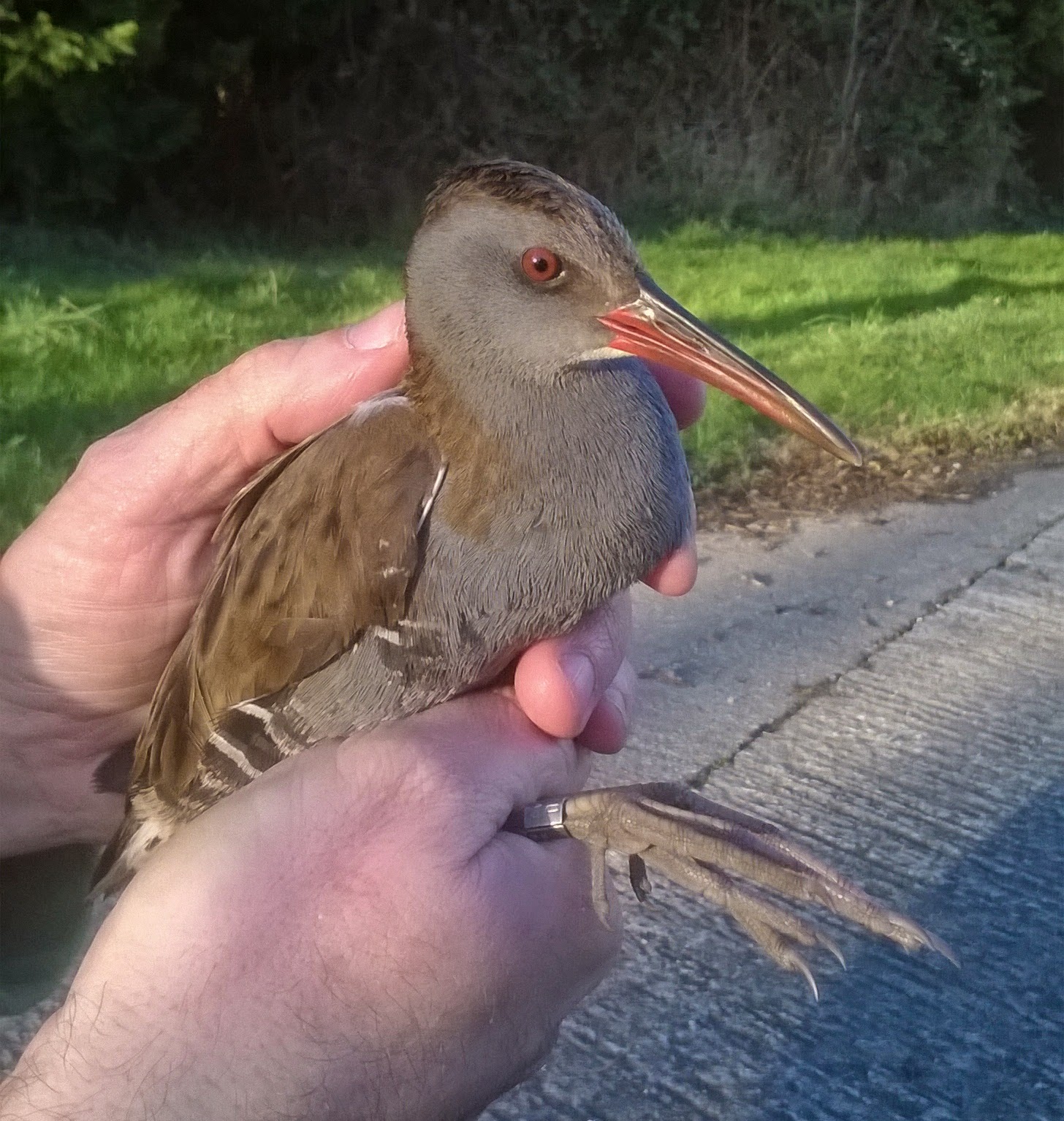 Posted by Mark Grantham at 18:10 No comments:

Stithians Chaffinch in Norway and even more Welsh Stormies!

Our last blog post highlighted a few interesting recoveries received from the BTO, and with only a very slight alteration to the theme (this time "Autumn migrants going the right way and more Welsh Stormies"), this post highlights more recoveries received today. Normally the crown would be taken by the reports of three more Lizard-ringed Storm Petrels recaught in south Wales, but instead of the usual reports from Skokholm Island, these came from nearby Skomer Island. Two of these birds were ringed on The Lizard in 2013, recaught on 28th and 29th July 2014, but 2683255 was more interesting. It was ringed on The Lizard on 30th June 2014, before being recaught on Skomer Island at 23:25 on 25th July. Not satisfied with this, it was then recaught an hour and a half later (01:00 on 26th July) on Skokholm Island, 3-4km from Skomer. The chances of this must be rather slim, but it'll be fascinating to see if this bird is caught again in future years.

But this time round, the most interesting recovery was of a lowly Stithians Chaffinch, ringed as an adult way back in December 2011. We've often wondered how far these birds came to winter at Stithians and presume that they'd be local SW birds relocating, so this report from southern Norway was amazing! Y397543 was recaught near Høvåg on 25th March 2014, presumably on return migration to somewhere else in Scandinavia.

This is just the second Cornish-ringed Chaffinch to be found in Norway (following one in 1977), but four have made it to Sweden.

Last up was another northward-bound migrant, but this time a Sparrowhawk ringed in a Lizard garden on 6th September and sadly found dead on the road in Falmouth a month later.
Posted by Mark Grantham at 18:53 No comments:

We've just received a whole batch of reports back from the BTO detailing some movements of birds to and from the group area. There were rather a lot of local movements, but here are some of the highlights.
Our great run of Storm Petrel movements continues (see the first few here), with yet more movements to and from Wales. This time we received details of four birds ringed at The Lizard that were recaught in Pembrokeshire, on Skokholm Island and at Wooltack Point. Two of these were birds ringed in 2012 and 2013, but the others were quite quick same-year movements, at 38 days, 26 days and 20 days. In fact, all of these last three were ringed on the same date (30th June), the same date we also caught a Portuguese-ringed bird.

We then just had one Storm Petrel movement he other way, from Skokholm to The Lizard (194km), but in managed this in just one day! It was ringed at 00:40 on 24th July and recaught down at The Lizard at 00:30 on 25th July.
Two rather more unusual reports came from Nanjizal, with migrants moving north in the late summer/autumn. A Sedge Warbler ringed on 21st August was recaught 250km away in Dorset seven days later (so moving northeast) and even more bizarrely a juvenile Sand Martin ringed on 10th July was recaught nearly 500km away in West Yorkshire six days later! This again is a very quick northeasterly movement and seems most odd...

Posted by Mark Grantham at 15:39 No comments:

In what turned out to be a quiet morning at Predannack, I thought we'd just post up a pic of this rather obvious set of fault bars on a Chaffinch. 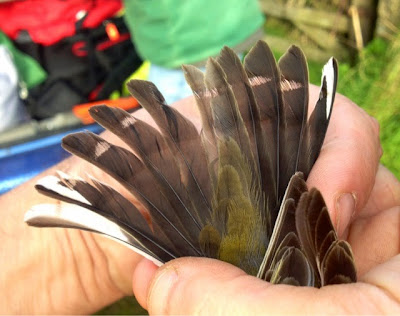 Fault bars are areas of weakness where growing feathers have been compromised by poor weather, food shortage etc, and are normally most obvious on tail feathers. This can happen at any age, but the key thing to remember is that juveniles grow their main flight feathers (including tail) at the same time (in the nest), whereas adults will moult them sequentially. So although birds of any age can show fault bars, the fact that on this bird the distinct pattern of fault bars is the same distance from the tip of all the tail feathers indicates these were all grown at the same time; ie this is a juvenile bird.
Posted by Mark Grantham at 21:17 No comments: