Making the most of low tides and fine weather, two of the group clambered down to the Kittiwake colony at Trewavas Head this afternoon to have a quick check for colour-ringed birds. The rather inaccessible site had the usual 35 pairs looking to occupy nest sites and the short tidal window gave us the chance to sit and look through the birds present. 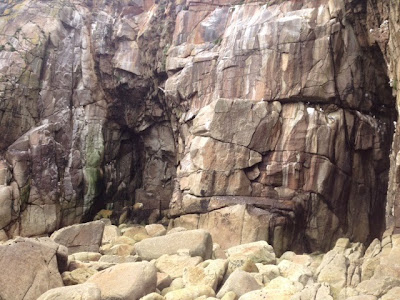 In the end we managed to read rings on four of our own colour-ringed birds (all ringed here in 2013) and two French birds.

Interestingly, one of our own birds back at the colony today was also photographed at sea back in July 2014 - see blog post here.

It only seems right that over Easter weekend we should post about all things egg... Whilst the season has only really just begun, we already have a few species sitting on eggs. The first to lay were Mullion Island Cormorants, closely followed by a few early Shag nests at Rinsey Cliffs, the latter site now having 12 birds sitting. Shags being Shags, some of these won't be sitting on eggs, but at least seven birds are sitting on full clutches of three eggs.

Our first nestbox birds are also on eggs as well: not surprisingly Dippers in Idless Woods. One box just contained a lined nest but the second box had a presumably as yet incomplete clutch of three eggs, nicely covered with beech leaves (I think!). This is a little later than last year, when they had a full clutch by 27th March, but earlier than 2013 when the same date say just two eggs laid.

Posted by Mark Grantham at 14:12 No comments: