With the swell finally dropping off, this morning gave us the opportunity to get over to Mullion Island to ring some Cormorant chicks. With a ragtag fleet of a kayak, a dingy and a paddleboard we made it over and in pretty perfect conditions. We thought we were pushing it with timing, but remarkably a lot of birds on the island were still on eggs!

But there were enough birds to keep us occupied and in less than 45 minutes we colour-ringed 13 chicks, with one smaller bird just metal-ringed. With birds from the island moving as far south as Spain (see a map of Mullion Cormorant movements here) it'll be fascinating to see where this year's birds go. 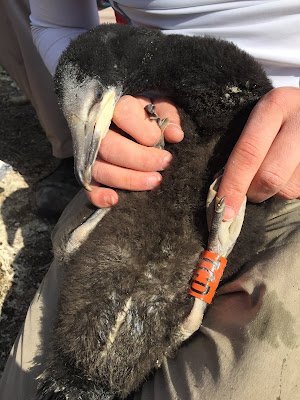 Welsh Cormorant on the boating lake

The good thing about Cormorants is that they're big, so have big rings that with patience can be read on confiding birds. In the last couple of years we've had reports of two birds from Little Saltee Island, Co Wexford: a chick from 2106 seen at Helston Boating Lake in July 2017 and a chick from 2010 seen at Swanpool in December 2018.

The latest though was a bird ringed as a chick on Puffin Island, Anglesey last year that was photographed on Friday at Helston Boating Lake. 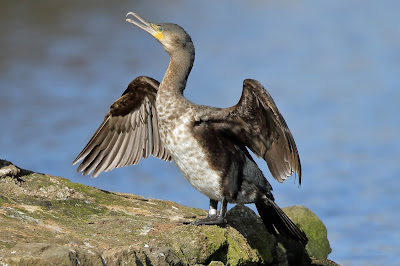 Thanks to Terry Thirlaway for the photo and for passing the info on.
Posted by Mark Grantham at 09:44 No comments: