It's always nice to be back out on the cliffs and today saw a couple of us out checking up on our Kittiwakes at Trewavas Head. This has to be the best place to run a boring old monitoring project, deep in the heart of Cornish mining country. 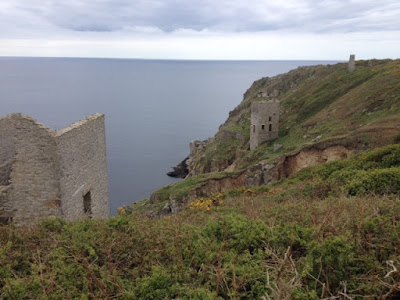 But an abseil down to one site and a scramble/coasteer to another was pretty productive and we managed to read 19 colour rings on birds in the two colonies. Most were birds we'd ringed ourselves in previous years, but 'EC' resighted today was a bird originally ringed as a chick on Gugh, Isles of Scilly in 1996, so now over 20 years old and still going strong!

We also caught up with three French-ringed birds, all of which are regulars at Trewavas Head, ringed at Point du Raz in Brittany in the last 10 years. The bird below, WWN-OWM, was ringed in 2007 and has been seen at Rinsey and Trewavas since 2012. 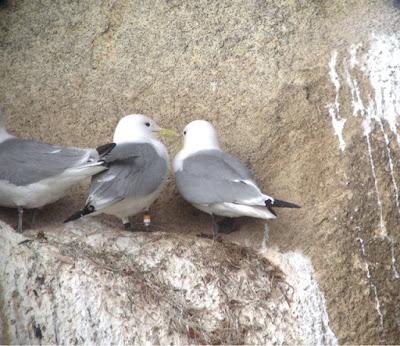 Just to add to the Cornish-ness of the day, the walk out saw a pod of over 40 Bottle-nosed Dolphin, including a few calves, cruise past and the walk back saw two Choughs enjoying the updrafts from the cliff edge!
Posted by Mark Grantham at 23:08 No comments: