With the nets now down at Nanjizal for the season, it's a good time to reflect on what was a record year for the site. The final total of 7,898 birds ringed was exceptional, with the top 10 species ringed for the year being:
But totals of several other species were also notable: 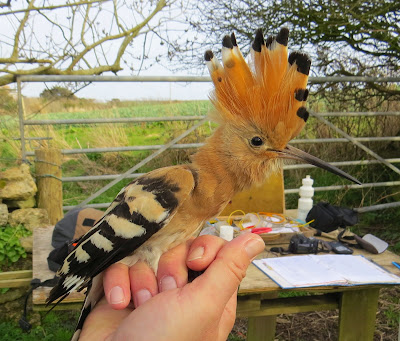 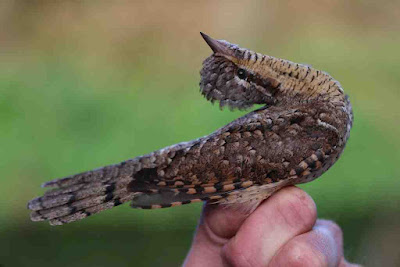 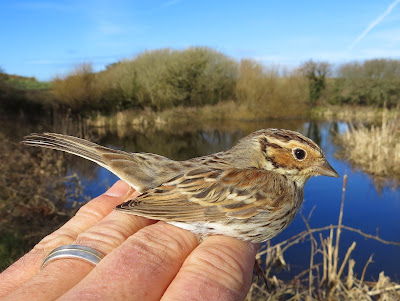 Add to that singles of  Nightjar, Blyth's Reed Warbler (the first record for Cornwall), Melodious Warbler, Dartford Warbler, Subalpine Warbler, Pallas's Warbler and Common Rosefinch and it really has been a year to be remembered! 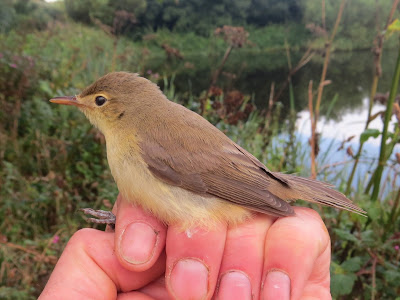 A small amount of preparatory habitat work was done during the winter, but on the whole the site looked ready for the season. Around six years ago, the field margin had been sown with maize, but with the ground becoming too waterlogged, the area was left to fallow. It soon filled in with willowherb and other native species and became excellent habitat for Sedge Warblers, but unfortunately, was cut and sown with rye grass in mid-September. This will obviously have an impact on the breeding birds, but maybe not so on passage birds. It just shows how quickly good, low maintenance breeding habitat can be created in a short space of time.

Spring was a bit hit and miss and there weren't any high numbers of common migrants passing through. I can only remember one notable day when a good number of Grasshopper Warblers appeared. Garden Warblers increased again and reared young for the first time in a few years and Dunnocks had a good, early breeding season. A few unusual birds turned up in spring and two were patch ticks; Squacco Heron and Little Bittern. From photos, the Squacco was different to the bird at Creen Bottom.

The breeding season seemed to be quite reasonable and it was nice to see the Sedge Warblers rear a good number of young, quite different to the national picture. Other species also seemed to have reasonable season, with notable increases in species such as Coal Tit, Redpoll, Siskin and Goldcrest. Once autumn passage commenced, the still and favourable weather, along with increased ringing hours, helped the annual totals considerably, with just under 8,000 birds ringed! The increased coverage was mainly due to the efforts of the ringing group, although two other ringing groups from up-country did visit for an intensive week's ringing.

Record numbers of Sedge Warbler and Blackcap were trapped in the still weather during August and September. A species that seems to have done well everywhere is Firecrest, with 114 ringed on site. Other species that broke any previous annual total by a considerable margin were Cetti's Warbler, Kingfisher, Reed Warbler and Yellow-browed Warbler. Presumably this was due to a good breeding season and possibly an expanding range of the latter. The autumn passage of Willow Warbler was far more noteworthy than the spring and Whitethroats didn't seem to be as abundant as last year and totals were down. September through to December saw a good passage of Chiffchaffs in the southwest and this year seemed to be quite a normal year, although local breeding birds didn't seem to be very successful.

The totals show a good number of unusual birds were also caught, which are always nice to see, although unfortunately they always seemed to appear on busy days when you don't have much time to appreciate them! The most noticeable catch was Cornwall's first Blyth's Reed Warbler, but a Dartford Warbler was a welcome and overdue addition to the site ringing list. 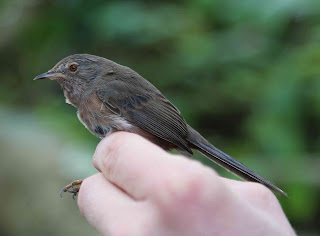 As for controls (birds ringed elsewhere), fewer British Blackcaps than last year were controlled, even though the numbers were higher, and the site saw its first continental Goldcrest in the form of a Dutch-ringed bird. One of the many early dispersing September Robins made its way to Wendover, Bucks, and we also caught our first Sedge Warbler from Shetland. Also of note was a Yellow-browed Warbler recaught just five days after being ringed at Gibraltar Point Bird Observatory in Lincolnshire!

So all in all, 2015 has been an excellent year, with many thanks to all the ringers involved and if you're tempted to visit in 2016 then check out the details on the website.
Posted by Mark Grantham at 23:01 No comments:

Email ThisBlogThis!Share to TwitterShare to FacebookShare to Pinterest
Labels: nanjizal

We blogged at the weekend about the unfortunate Cornish Peregrine found in Portugal, so thought a short update was in order. Thanks to the sterling efforts of the Wildlife Rescue Centre at the University of Trás-Os-Montes e Alto Douro (UTAD), this bird was operated on and is now doing well. But what did transpire during the surgery was that it had actually been shot originally, as evidenced by the pre-op x-ray. 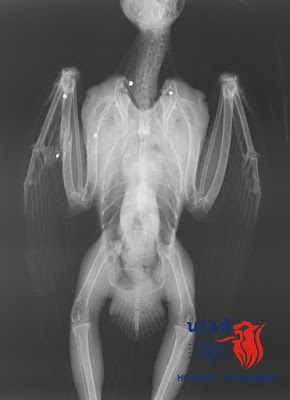 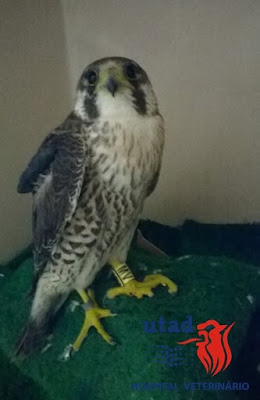 Here's hoping all their hard work pays off and MV will recover...
Posted by Mark Grantham at 09:47 No comments:

Email ThisBlogThis!Share to TwitterShare to FacebookShare to Pinterest
Labels: peregrine

We have recently received a report via BTO of one of our Peregrines ringed this year. GR80973 was one of two chicks ringed near Morvah in July and was sadly found with a broken wing in northern Portugal at the end of November. It is currently in care and we'll post an update as soon as we know anything more...

This is an especially notable movement, as can be seen from the map below of Peregrine movements from the BTO's Online Ringing Report. In fact, this is just the second report of a BTO-ringed Peregrine in Portugal (following one from Co Louth found dead there in 1981), with only one other bird further south; a bird from Northumberland found dead on Lanzarote in 1998. There's not much other ringing news to report, what with the weather being so poor! But we've been out reading a few rings (coloured and otherwise), catching up with a few old friends. From east to west...

Posted by Mark Grantham at 10:06 No comments: