A couple of days ago we ringed the last of our first-brood Barn Owls, this time out at a National Trust farm in Penwith. This is a great example of the value of monitoring, with the male of this pair being a first-year bird ringed a few miles up the coast at another National Trust farm. As a young breeding pair, they had a faltering start... Their first nesting attempt was just three eggs, two of which looked like they were never incubated, with the female sitting on a single egg at the front of the box. They soon decided to start over, moving to another box on the farm, laying three eggs in quick succession but then waiting a week to lay a further two! It was presumably these late two that never made it beyond hatching, but three did survive big enough to look like fledging (below being ringed). 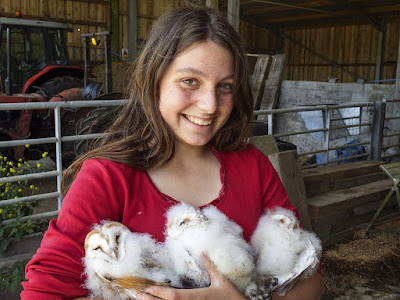 With all the first broods now ringed, we can tally up the year and see how it compares to the last few...


So whilst we checked fewer sites than last year, we saw good rates of occupation and similar clutch and brood sizes to 2014, but managed to ring more chicks than any other year. What was different this year was the high number of failed attempts. Of these, two failed at the egg stage (the young pair above and another where the female was found dead mid-incubation) and two at the chicks stage.

One of the failures saw five large chicks found decapitated in the box. We've seen this once before and presumed it was predation by a Stoat, but we've since heard that adults under stress can sometimes kill their own chicks in this manner, so it was perhaps food stress that caused this particular loss. This happened overnight, being a grisly find for the barn owners when they turned on their nestbox camera in the morning.

But with more boxes being put up and monitored, we hope to have more interesting and enlightening stories to share over the coming years. Thanks as ever to the many landowners who let us into their barns and houses to monitor these birds and in particular to Shaun Boyns at the National Trust for coordinating all of the monitoring in Penwith.
Posted by Mark Grantham at 22:27 No comments:

Last month we blogged about the 'rush' of four French-ringed Storm Petrels we caught on one night (see the post here), but we had no such luck in July, but our catch of 75 birds on one night was a bit of a Lizard record! But we've also heard a bit more about the Storm Petrel ringing in France, courtesy of Bernard Cadiou.

He confirmed that the four birds we caught last month were all ringed in 2014 on the Molene archipelago, where he's been running the ringing programme since 1997. In that time he's ringed over 18,000 birds and on just three nights last month they caught 688 birds - all in two nets without a tape-lure! But these are breeding birds and he was able to confirm that most of the birds we are catching in Cornwall are wandering non-breeders, which once settled at a colony will rarely wander far from it. One good example is 2683074, ringed at Lizard on 8th July 2013 and recaught on Banneg in the Molene archipelago just three nights later. Interestingly, it was then caught incubating an egg on the nearby colony of Enez Kreiz in 2014 and was also recaught there by Bernard just yesterday, this time incubating a small chick!

Many thanks to Bernard for the update on their ringing programme on the islands and it certainly inspires us to ring more birds here!
Posted by Mark Grantham at 13:35 1 comment:

The blog has been a bit quiet recently, but that's mainly due to a long overdue holiday in Turkey! But I came back to a bit of a flurry of gull reports, all of which were quite interesting...

The first two were a bit sad, as Herring Gull W:062 appears to have lost a leg! It was seen with both legs intact in amongst the thousand other gulls in Cadgwith Bay in January, so has obviously suffered a mishap since then. It was reported from Swanpool, having been ringed locally in Falmouth in 2014. 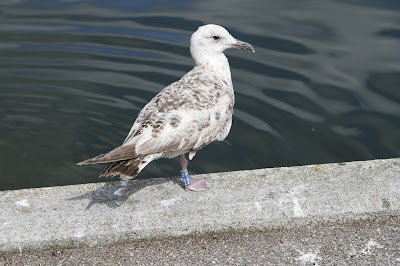 We also heard that W:197 from St Ives had been found with a broken wing and broken leg in St Ives, so had to be euthanased by a local vet. Better news came in the form of W:060, originally ringed on Falmouth High Street, which is now also on it's holidays, being seen in France. This is the first foreign sighting of one of our Herring Gulls, so was great news! 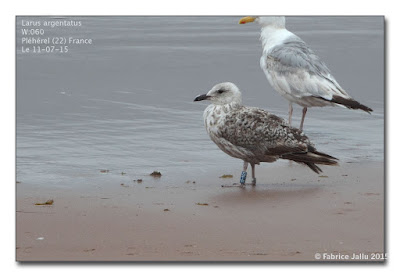 We've also only ever had one previous foreign sighting of one of our Great Black-backed Gulls, so receiving two in a week was a surprise. Our only other foreign sighting was L:BF8, ringed in Falmouth and seen in France in October 2014, and it apparently liked France as it was reported from a different site again at the start of May (delayed as reported by letter). Also heading south was L:BJ3, ringed on Mullion Island in 2014 and seen at Lizard Point twice in August 2014. It was seen on Chouet Landfill, Guernsey on 13th July and it's about time one of our birds made it to the Channel Islands.

Apart from this, since the last blog update we've been doing some ringing, so below are a few highlights in the form of pretty pics!

Posted by Mark Grantham at 10:12 No comments: