Highs and lows in the Kittiwake world

Just for a change of scenery I headed up to look for some colour-ringed birds in the Kittiwake colony at Porthmissen, Trevone this afternoon. In many ways this was a day of highs and lows, quite nicely reflecting the life of a Kittiwake.

The first high was the site, as this part of the north Cornwall coast really is quite stunning! The birds are best viewed from across a narrow isthmus looking back into the colony, nesting along a series of narrow ledges across the sheer face. 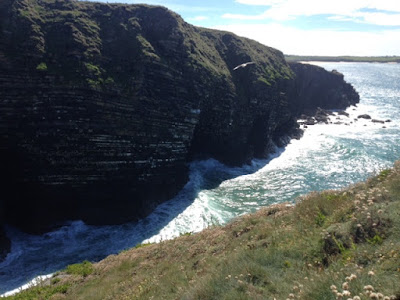 The high was soon replaced with a low though, as on scanning through the colony it soon became apparent that a vast majority of the nests were empty, some with attendant adults, some abandoned. This has recently been one of the key sites in the county for Kittiwake and to see it so devoid of new life was quite depressing. The last few years have seen huge declines in Kittiwakes across the whole south of their range, so we're just hoping that the big declines in key sites in Cornwall are just temporary blips.

The next high came when scanning through the core of the colony, waiting for birds to stand or and shuffle to check them for rings. I was expecting to find one or two French-ringed bird, but found none. But far more interesting to me was a bird that leap out at me as having one of our rings from the Lizard (60km away)! Thankfully it wasn't too far away to read and it turns out that 'AL' has a far from mundane history. It was actually ringed as a chick on Gugh, on the Isles of Scilly, in 1999 and was recaught by us at Rinsey in June 2012, when we added one of our colour rings. It was then seen three more times at Rinsey in 2012, six times in 2013 and just once in 2014 which was the year the colony crashed there. So we don't really know when it first moved to Porthmissen, but it is certainly one to look out for there in future.

After that quite special high, I was then plunged into a rather depressing low with the arrival of a juvenile (female?) Peregrine. After a short while visiting empty parts of the colony, it then happened upon a ledge with four nests on it, all with attendant adults. The first brooding Kittiwake put up quite a fight, but with the adults soon displaced, the Peregrine proceeded to jump from nest to nest along the ledge, taking all four chicks from these nests (all were broods of one) over 45 minutes. The first three were eaten at the nest, with only feeble mobbing from the parents, though one adult did manage to knock the Peregrine off the ledge, which then carried the last chick off to the clifftop to eat.


Whether this is a new behaviour or a regular occurrence is unknown, but this may go part way to explain why there were so many empty nests in other parts of the colony. That's nature though, even if it is mightily depressing!
Posted by Mark Grantham at 22:03 1 comment:

Breeding Stormies on the Brisons

The Brisons lie just off Cape Cornwall and really haven't been visited for a decade, so it was about time we made the effort and went and had a look! Thanks to the good fishing folk of Sennen Cove we were able to hitch a lift over for a couple of hours and ring a good number of birds and also try to get a handle on the number of breeding birds over there. In total we were able to ring 42 Shags (two adults), 13 Razorbill (seven adults) and an unexpected 11 Guillemot (eight adults). Many auks were still on eggs, with a few abandoned Shag nests and several still with small chicks.

More significantly though, we also heard at least two Storm Petrels calling (or singing) from one of the boulder fields. This remains the only site in the county that Storm Petrel have been presumed to breed, although we're sure that other several other sites must exist but are just hard to access. 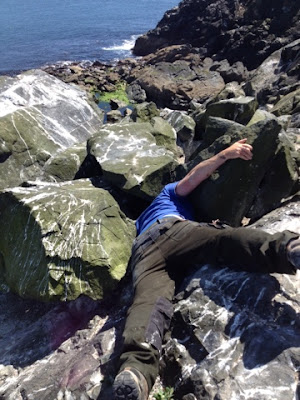 Email ThisBlogThis!Share to TwitterShare to FacebookShare to Pinterest
Labels: brisons

Last of the Choughs

Not quite as ominous as it sounds, but this week saw us ringing the final brood of Chough chicks for the year. A small but very experienced rope team joined us to help us access this new site on National Trust land. A short abseil and some inventive ladder-work later and we found the nest, with three small but healthy chicks. This is rather notable as the female here is just one year old and breeding in their first year is exceptional in Choughs. Her partner is a three-year-old male so almost as inexperienced. The three chicks were big enough to ring but not big enough to know their sex, which is normally judged on size (by measuring leg length). All were good weights though, so hopefully will all fledge in the coming weeks. This brings the number of Cornish chicks colour-ringed this year to 15; slightly down on previous years, but a great result considering several of these broods were raised by young, inexperienced birds. Many thanks to Alan, Roo, Christian and Will for their expert advice and help in safely accessing the site and to the RSPB staff and volunteers for monitoring the site in advance of our visit.
Posted by Mark Grantham at 08:45 No comments:

Email ThisBlogThis!Share to TwitterShare to FacebookShare to Pinterest
Labels: chough

The first summer new moon coincided with a period of nice still weather so we had the chance to do some nocturnal netting for Storm Petrels. We headed to Hot Point, Lizard on the last two nights, netting a total of 52 birds. This is more than we've caught so early in the year before so worth the missed sleep! 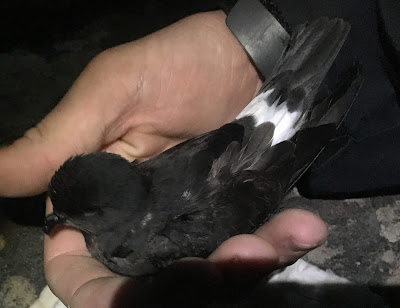 Most of these were new birds, but we did recatch birds we'd ringed there in June and July last year which is interesting and also a single French-ringed bird. Cornwall really does get the lion's share of French birds with 2/6 birds caught in the UK in 2015 being caught in Cornwall. We sometimes catch birds with parts of feet or legs missing and the last couple of nights saw a bird missing a whole leg and one just missing the end of its foot. This doesn't seem to hinder them too much though which is lucky!

Being a bit behind the other pairs, yesterday saw us finally scrambling round to see how the Lizard Choughs were doing. We weren't quite sure what we'd find in the nest, so it was a pleasant surprise to find four chicks in the rather tight fissure in the cave.

Unfortunately one of the chicks was a bit of a runt, being 50g lighter than its siblings, so it'll be interesting to see if it survives. Apart from the runt, the other birds were all given a unique combination of colour rings which will allow us to follow their fortunes in the coming years. Measuring the leg length also gives us a good indication of sex and the three larger birds appeared to be two females and a male. 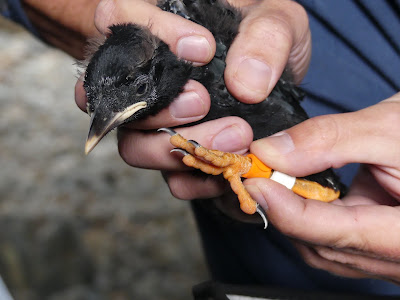 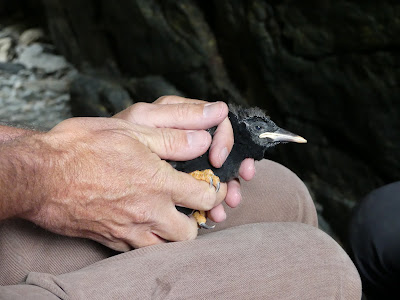 The Lizard brood brings the number of chicks ringed this year to 13, with one further site to check next week. This figure may seem low in comparison to previous years, but many of this year's pairs were inexperienced birds, so this number will only increase.

Many thanks as ever to all of the dedicated Chough-watchers who make our life so much easier by following these birds and working out hatching dates and to Cat Lee from the National Trust for the photos. More information on these iconic birds can be found on the Cornish Choughs website.
Posted by Mark Grantham at 19:24 No comments: