Yesterday afternoon we ringed our last (and latest ever) Barn Owl chicks for 2021, with two present in a box near Carnkie. This was a replacement brood after an earlier failure and only the second time we've ringed chicks in September.

This is then the ideal time to have a look at the numbers and see how 2021 was for our owls. It was an unusual year, with some early broods, some late broods, some regular sites unoccupied, some new sites occupied and generally just lots of surprises.

The totals for the year are below, showing slightly fewer boxes monitored this year, which we can partly blame on lockdown again, so we hope that 2022 will see us back up to checking over 100 boxes. The average clutch size was the lowest we've seen since 2013 which may be a consequence of the spring weather. This also followed through to smaller brood sizes, which were also much lower than in recent years, and fewer chicks ringed than last year.


We always see a few short movements during the year, with ringed chicks taking up residence in boxes, so below is a map of these noted in 2021. 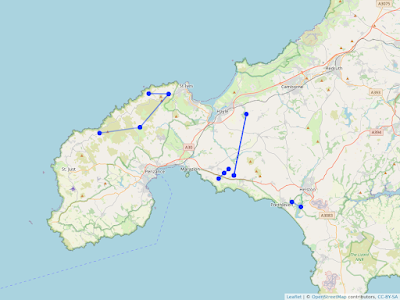 A few of these are quite interesting though. One site near Zennor was obviously very lucky, with chicks from 2016 (with consecutive ring numbers) both found breeding in other boxes in Penwith in 2021. One had bred at a different site in 2019, but then moved on again in 2021, whilst the other was a new breeder five years after ringing. We also had an adult female switch boxes, having bred at a site for at least two years. she moved a few kilometres down the road to a new site to breed.

One other unusual, and sad, story involved a bird found breeding in a box in June 2020 (with three chicks) that was already ringed. Unusually the ring showed it was of captive origin and had actually come from a breeder in Torquay before ending up at the Screech Owl Sanctuary near Bodmin. It had escaped from there during a flying display and obviously found the wild to its liking, breeding nearby. It then bred again in 2021 but in a different box, but was the sadly found injured six weeks later and was taken back to the sanctuary. The local vet found that it was too injured to be rehabilitated so was sadly put to sleep. It's great to know the full-circle history of this bird, despite the sad ending.