We were recently contacted by Josie Hewitt, who's spending the summer monitoring seabirds on Skomer Island in south Wales. As part of their regular monitoring, Josie photographed a colour-ringed Kittiwake in the week which wasn't local, so got in touch as she thought it might be one of our Cornish birds. 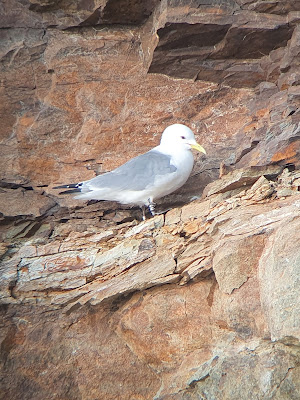 It turns out that Black N5 was indeed one of our Trewavas Head birds, ringed as an adult in June 2018 and interestingly not seen since. In our experience, adults present in the colony early in the season are often wanderers, but the fact this bird was ringed in June (as a breeding bird) is a bit confusing! But considering the main Trewavas colony has failed in the last two years, maybe this adult has moved on, so it'll be interesting to see if it remains over the summer.

This also isn't as unprecedented as it might seem, as our other monitored colony at Portreath has a regular breeding bird that was ringed as a breeding season adult in the breeding season north Wales!