It's long been known that some finches will undergo a limited moult of their primaries as part of their (partial) post-juvenile moult. It's not always easy to spot, but over the last couple of days we've seen some good examples in my Lizard garden. This Greenfinch is easily aged as a first-year bird (juvenile) by virtue of its relatively fresh plumage and brown-centred, pointy primary coverts. But you'll notice that it's in primary moult, with one feather still growing and another fully-grown inside it. The moulted feathers are not only fresher, but have much blacker centres, greyer tips and the yellow portions on the outer web are brighter than the juvenile feathers. But note that in this type of eccentric moult, the corresponding primary coverts aren't replaced. 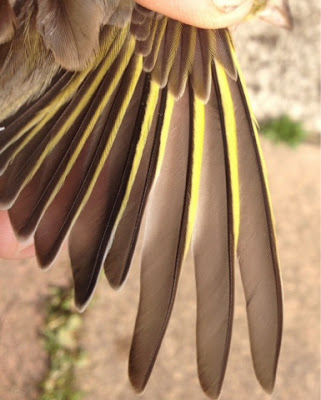 This same pattern of moult is seen in several other finch species, including Goldfinch, Siskin and, rarely, Linnet. Two Goldfinches bizarrely caught at the same time today also showed this same moult pattern ,but had already finished moulting. So whilst they didn't have any obvious growing feathers, the contrast in the two ages of feather is still obvious enough. Both birds had just moulted two primaries in the centre of the feather tract.

Interestingly though, we did also catch a Goldfinch that was just finishing a complete moult, having moulted all flight feathers (primaries AND secondaries), primary coverts (seemingly) and tail. We know this was a first-year bird, as it was ringed as a 3J (complete juvenile) on 26th May. This is a much rarer pattern of moult, but unfortunately we don't have any photos of this bird!

Apart from garden ringing, we've also been helping out a Masters student at University of Exeter, helping to fit PIT tags (transponders) to Blue and Great Tits. This is part of a study looking at the effects of supplementary feeding on fitness in birds. PIT tags allow birds to be recorded remotely at feeders, checking themselves in and out of a feeding aviary as they pass through an aerial. 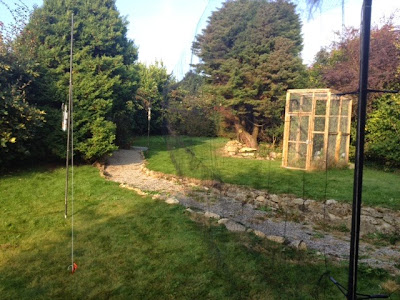