Something odd afoot in the Kittiwake world?

I'm not one for coincidences, but in all our years of colour-ringing Kittiwakes we've only ever had one sighting away from a breeding colony (a bird photographed at sea - more here) and no dead birds found. So it was a bit unusual that in one month we have reports of two dead birds and also two resightings. The first was one of this year's Trewavas Head chicks, found dead just a month later (on 12th August) at the unlikely location of Zeeland in The Netherlands. A second bird was then found dead in mid-August on Cape Clear Island off Co Cork, Ireland. UJ had also been ringed as a chick at Trewavas Head, in 2016.

The two sightings were both of birds at Porthgwarra (near Land's End), photographed by Jon Greep on 29th August. CP was ringed as an adult in 2013 and has been seen at Trewavas Head several times since, but always early in the season, never seen to be breeding. E2 was also ringed as an adult, in 2015, but hasn't been seen since. So we do wonder if these were both young, non-breeding birds when ringed. 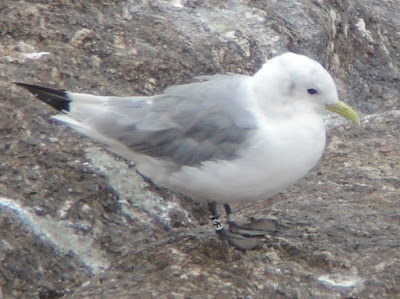 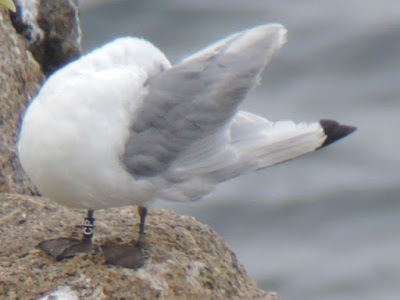 So whether this run of unusual Kittiwake records is related to the same weather systems that have brought large numbers of seabirds over into the eastern Atlantic is unknown, but it does seem a very odd coincidence.
Posted by Mark Grantham at 20:33

Email ThisBlogThis!Share to TwitterShare to FacebookShare to Pinterest
Labels: kittiwake